Incognito is a high-throughput proof-of-stake sidechain, made possible by the implementation of state sharding. Incognito takes a practical approach in designing and implementing its consensus mechanism, based on previous research and existing engineering by OmniLedger, Bitcoin, Ethereum 2.0, and Zilliqa.

This post will detail the means by which Incognito enables 100% confidential transfers of ETH and ERC20 tokens.

In this post, we present the Incognito-Ethereum bridge — designed for fully decentralized cross-chain interoperability. Implementations will enable cross-chain communication between the two blockchains, and enable the choice of “incognito mode” for transfers of crypto assets (ETH and ERC20 tokens). Using this bridge, anyone can turn on privacy for their tokens and shield their balances and activity. 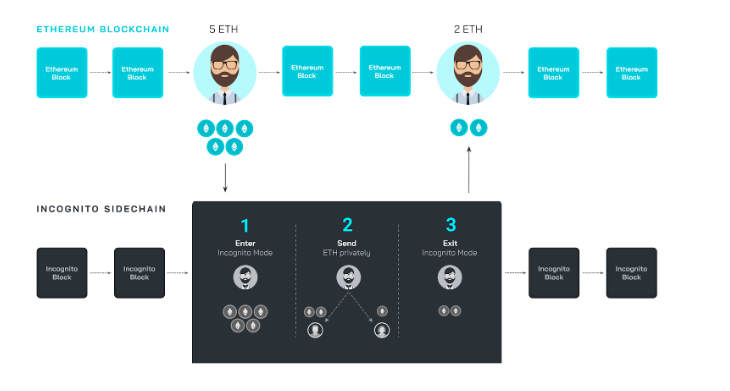 In the following sections, we will define and explain the functionality of the bridge as well as the mechanism by which such requirements are implemented.

A bridge can facilitate the transfer of crypto assets (e.g. tokens) between two blockchains by implementing locking, minting and burning mechanisms on each blockchain. When tokens are sent to a locking contract on Ethereum, Incognito needs to verify that the “locking” transaction was indeed confirmed on Ethereum, and upon the submission of the token lock transaction on Ethereum, proceed to mint a corresponding amount of privacy tokens (e.g., private Ether or private ERC20 tokens). When the private tokens are burned, the locking contract on Ethereum will verify the validity and unlock it upon submission of proof. This effectively maintains a 1:1 ratio between the private token on Incognito and the original token on Ethereum.

The Incognito chain verifies that proof and extracts information from it in order to mint private tokens to the predefined address.

The whole process is illustrated in the following figure: 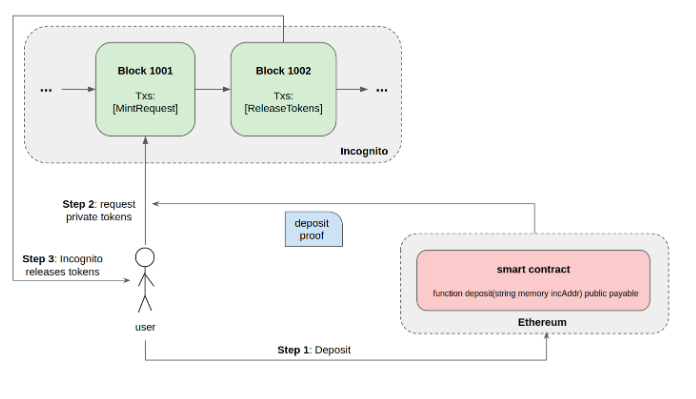 Our decentralized smart contract on Ethereum performs two pretty simple functions in the aforementioned deposit process — one for Ether and one for ERC20.

Our decentralized smart contract on Ethereum performs two pretty simple functions in the aforementioned deposit process — one for Ether and one for ERC20.

When those functions are called, two important pieces of information ( incognito address and deposit amount ) will be logged in anticipation of the related transactions being confirmed on the Ethereum network. In the following section, we explain how we use this information in minting private tokens.

In order to verify the validity of an Ethereum proof on Incognito, we need to:

Since Ethereum’s consensus is Proof of Work, here are some ways to achieve (1):

In either (1a) or (1b), Incognito must obtain a valid Ethereum header in order to support the verification in (3). The team opted for (1b), a solution sufficient for moving forward based on the following assumption: as long as at least ⅓ of the number of validators in the Incognito committee run honest Ethereum light nodes, all is well. A transaction may only be comprised when when a malicious Ethereum light node is run by at least (⅔ + 1) of the number of validators. (Note: Incognito’s consensus is Proof of Stake)

The verification process is illustrated in the following figure: 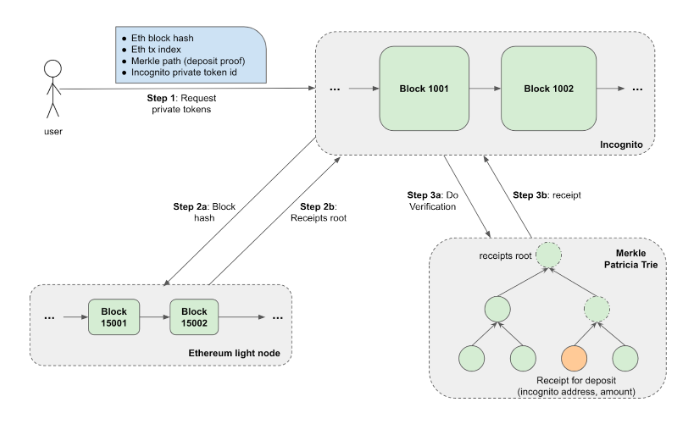 Along with the verification of Merkle path, the aforementioned process also extracts the content of the receipt belonging to a deposit transaction. From that receipt, the required information ( incognito address and deposit amount ) can be parsed for minting private tokens.

In other words, both deposit amount and incognito address of the receiver are stored in the proof so that no one can obtain the proof, do a front-running attack or steal any private tokens. 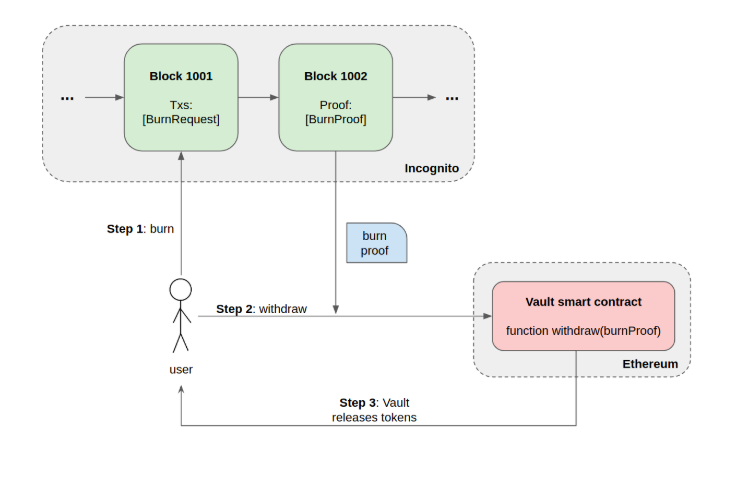 At any time, users can create a special transaction on Incognito called BurningRequest to initiate the withdrawal process. This tx sends an arbitrary amount of private tokens to the BurningAddress . Assets locked in this address cannot be moved, effectively destroying them. Along with the number of tokens to be withdrawn, users also provide a valid receiving address for the corresponding asset on Ethereum.

Here, TokenID is the private token id on Incognito chain, which will be used to derive the corresponding Ethereum asset (ETH or ERC20 contract address). RemoteAddress is the aforementioned address that will receive the Ethereum asset.

The tx is then mined and instructions generated and stored in the same block. This instruction will be included in a Burn proof , a cryptographic proof (signed by Incognito’s validators) that someone destroyed some amount of private tokens. Since the proof is stored onchain, it is viewable for anyone wishing to assess validity. The amount and token receiver (on Ethereum) is stored in the proof so that again, no one can get your proof, do a front-running attack and steal your tokens.

The proof is only considered valid when more than ⅔ of the current number of validators have signed it. On the Ethereum side, the list of validators is stored and continually updated to mirror Incognito’s.

The full code of BurningRequest tx can be found here: https://github.com/incognitochain/incognito-chain/blob/master/metadata/burningrequest.go

After a burn proof has been generated, it can be obtained from the Incognito chain and submitted to the Vault contract. The proof contains the following metadata (burn instruction in the diagram below):

Additionally, the contract also needs to verify that this proof is valid and signed by Incognito’s validators. We can split this into 3 steps:

These steps are illustrated in the diagram below: 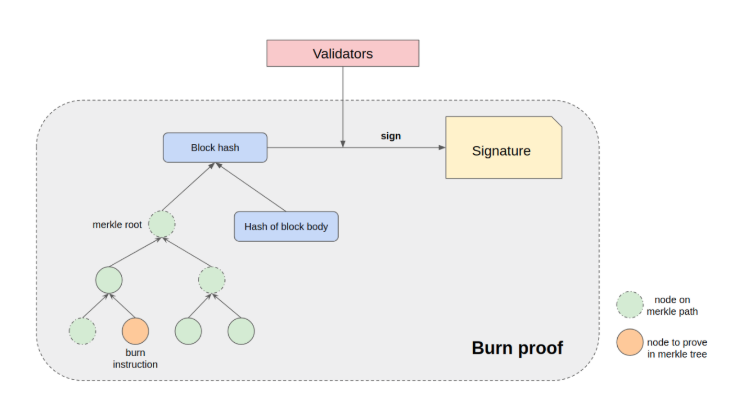 The code below shows the first step: verifying that the instruction (with hash instHash ) is in merkle tree (with root instRoot ), given the merkle path ( instPath ).

For the 2nd step, we need to recompute the hash of the block. On Incognito, block hash is computed by hashing the root of the merkle tree (storing all instructions) with the hash of the block body (containing all transactions). With this data, the contract can easily verify that merkle root X is in a block with hash Y.

Finally, the aggregated signature helps to prove that block hash Y has been approved by a group of validators Z. Note that since the contract already stores validator public keys, there is no need to provide them when validating a burn proof. The code below shows how we check if a sufficient number of validators (at least ⅔ + 1) signed the block.

We deployed the Incognito Vault contract on Ethereum’s Kovan testnet and configured it with the committee from the Incognito testnet (https://test-explorer.incognito.org/). The contract can be seen here.

As an example, we deposited some tokens (with this tx) to the Vault and withdrew some of it by providing a burn proof (in this tx). To obtain this proof, we simply need to make an RPC call to an Incognito fullnode (http://test-node.incognito.org/). The result of the RPC call can be viewed here and is partly shown in the image below: 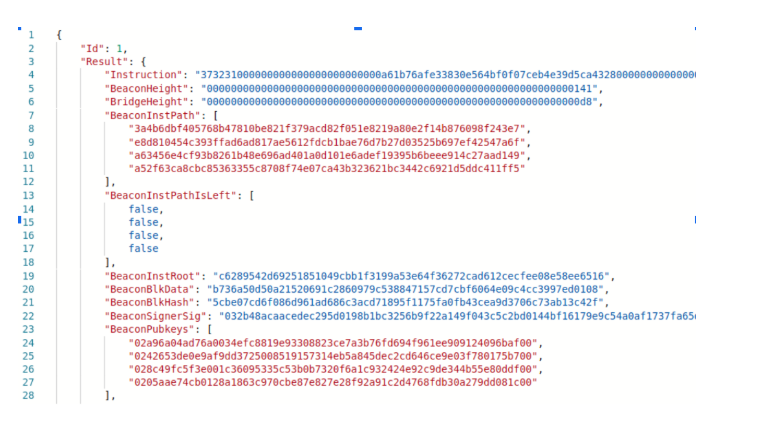 We have left an important question unanswered so far: Incognito’s validators change all the time, how can the Incognito Vault smart contract keep track of them?

This is fairly simple to do by utilizing the tools discussed above. Every time a new validator joins the list or an existing one is removed (swapped), they collectively create and sign a SwapConfirm instruction. This instruction stores the pubkey of all validators and is validated in the exact same way as a burn instruction. Each committee effectively “hands over” to the next, and the chain of instructions ensure the list of validators is correct.

The following diagram illustrates this process:

The bridge was officially released along with the Incognito mainnet (end October 2019), and at the time of writing, has now enabled more than 30,000 privacy transactions. The wallet app is available for iOS and Android.

16 Likes
Incognito Mode for Cardano (ADA)
pDEX blackboard Video: How it works
How to get ETH from a brand new wallet?
Maintaining your own bridge to Incognito
How smart is the contract?
What's shield? Why should I do it?
Building out Incognito’s trustless bridge to Bitcoin and all other blockchains
Privacy mode for Crypto Wallets
New smart contract interaction flow
Dynamic committee size
Launch pDEX v2 & hit 650k In trading volume.
pDEX: The first privacy-protecting decentralized exchange
New smart contract interaction flow
hieutran February 7, 2020, 7:42am #2

It would be better if you can give another post about the comparison with some other projects such as AZTEC or Tornado Cash.

@duc, any ideas on this? @andrey thought you may be able to weigh in. What would happen (besides sadness) if Incognito were to go under? In that event, do Incognito smart contracts automatically burn pTokens and mint new loser tokens or do our pTokens just go down with the ship?

hey @jtmerchant, if you look into our roadmap then you could see that we’re working on stuff related to scalability as well as stability that will help the network more stable/decentralized/mature. One of them is slashing mechanism against validators/nodes not operating for a period (aka. one or a few epochs)

So in the worst-case scenario when Incognito is to go under in your words, or current validators shutdown their nodes in other words, anybody in the community can get Incognito code open-sourced on Github and run their own nodes in order to make the network operational again. By slashing’s help, the “shutdown-ed” committee will be transitioned to the new committee running by the community and that new committee will sign on a committee transition instruction so that Ethereum smart contract’s committee would also be updated.

Once the committee on Ethereum smart contract gets consistent with the new Incognito’s committee, the Ether/ERC20 tokens should be able to unlock as usual.

In fact, the main goal of the core team is to try to make things as decentralized as possible, not only the network but also people. As you can see, there are more and more people contributing to the project on both product development (via builders reward program) and growth (eg., design logo, introduction video, etc) so I personally think that anybody can a right to keep the network survive if they still see it helpful.