We are happy to announce a new feature on Incognito that brings PRV to both Ethereum and Binance Smart Chain (BSC). In the past, PRV - a native token of Incognito was only used inside the Incognito network, but now people can own, send and receive PRV in external networks such as Ethereum and BSC. This still maintains PRV’s hard cap around 100M by using mint & burn mechanism that’s quite similar to the Incognito-Ethereum trustless bridge.

The main idea is pretty simple: burn PRV in the Incognito and mint PRV (ERC20 or BEP20) in an external network with 1:1 ratio. The process is shown in the following diagram: 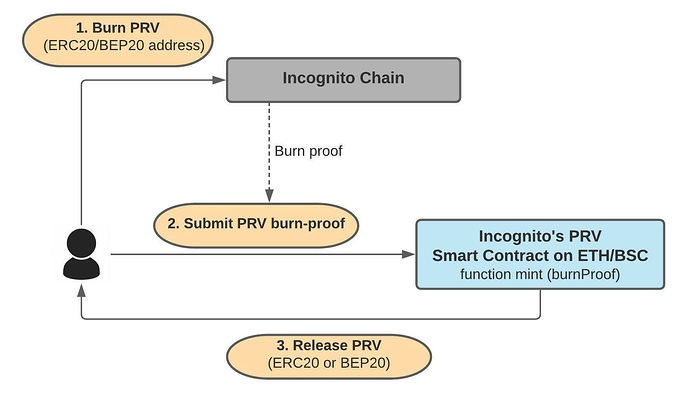 A user creates the Incognito transaction to burn PRV, the transaction also contains the address he will receive PRV in the external network.

After the burning PRV transaction is confirmed in the Incognito chain, the burning amount is deducted from the total PRV supply.

A burn-proof to prove PRV burned in the Incognito is submitted to the external network. Anyone can do this, if you use the Incognito app, an Incognito backend service will help with it.

The smart contract verifies the burn-proof. If it is valid, the smart contract will mint PRV to an address which is enclosed in the proof. After the step, the total PRV supply is increased by the minting amount.

Note: Since the feature was released, the total supply of the PRV is the sum of PRV supply from the Incognito chain, Binance Smart Chain, and Ethereum.

Conversely, one can burn their PRV in Ethereum or BSC to mint back PRV in Incognito with 1:1 ratio. The process is shown in the following diagram: 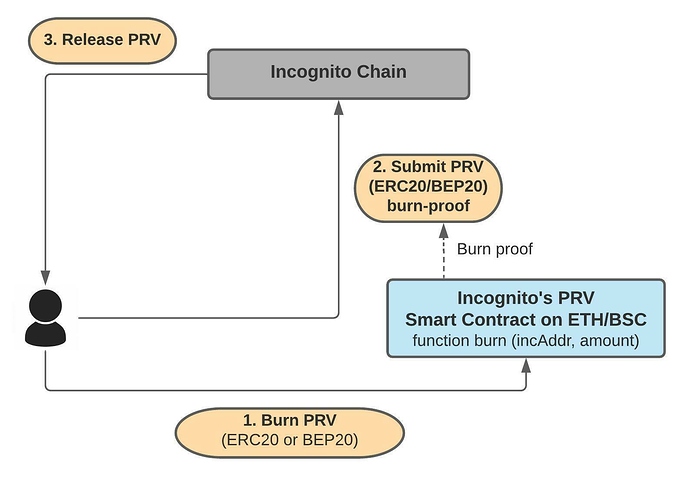 A user burns the PRV (ERC20 or BEP20) from an external network by sending the token to the respective smart contract. The transaction also contains the address he will receive PRV in the Incognito. The total PRV is decreased by the burning amount.

A deposit proof to prove PRV burned in a respective smart contract is submitted to the Incognito. Anyone can do this, if you use the Incognito app, an Incognito backend service will help with it.

The Incognito chain verifies the deposit proof. If it is valid, Incognito will mint PRV to the incognito address which is enclosed in the proof. After the step, total PRV supply is increased by the minting amount.

With this feature, the PRV may be used in either Ethereum or BSC, this will open up more use cases for PRV. We hope the community will make use of this new feature and benefit from it.

This is a great idea! Nice alternative to shielding when trying to get funds into incognito, and also a huge liquidity boost!

Can I try it out? Would be happy to bootstrap PRV pools on Uniswap and Pancakeswap

Will there also be a security audit of the contract? Similar to the eth trustless bridge. I’m asking because the minting mechanism is a popular attack vector in previous contract drain exploits.

Hey @duc, This is for future growth campaign but since related to pDEX, I want to write here. I think some PDEX token can be reserved for PancakeSwap or another DEX farming in BSC. A coin equal to PDEX token (e.g. wPDEX) can be minted in BSC. So we can hit three birds with one stone: awareness of Incognito, BSC bridge and new pDEX.

A new app version is released within today, you can give it a try then (and please give us your feedback

You can find out the deployed contract here. It’s just a standard ERC20 token contract (or BEP20 token contract for BSC) with 2 custom functions - mint & burn. Most verification logic is in Incognito Proxy contract that was audited before.

Let’s see how it’s going with PDEX token after the new pDEX’s launch, we can always think of that then.

You can find out the deployed contract here

hey @hiennguyen take a look on a low-gas mint and burn solutions for Ethereum (by BasketDAO). It might save thousands of gas dollars for users)

That’s so cool. I’ll take a look on this. Thanks, @andrey.

Count me in as well, happy to bootstrap some PRV liquidity pools on both Uniswap and Pancakeswap to get us started and onboard some new users. If we could time this around the time that Incognito plans to market the project again, there could be a lot of synergies to get some new people (and liquidity) onboarded!

OMG… @andrey… awesome to see your post…it has been ages since last I saw your post…hope all has been well with you and it is a pleasure to see you…will you be involved or more active within the community again or is this a quick pop in pop out kind of visit?..regardless it is good to see your post…

Hey hodlers, Upon the announcement below, I want to organize some polls to find out how many PRVs (and in which form) the community can provide liquidity in PancakeSwap: How many PRVs can you provide as liquidity (both sides of the trade pair)? poll Which coin do you prefer as the main quote? (PRV/BTC, PRV/ETH etc.) poll If your choice above is stablecoin, which one do you prefer? poll