The pEthereum is a powerful protocol of Incognito. In the first place, it’s designed to bring privacy to other blockchain’s dApps (e.g., pUniswap, pCurve, pPancake, etc). Then we are also leveraging the protocol for building the Incognito’s core product - the Universal Swap.

For that reason, improving pEthereum’s design would make a meaningful impact on many aspects of Incognito. In this topic, let’s dig into a few improvements that will promisingly help:

Current pEthereum’s design for bringing privacy to other blockchains dApps.

In the old design, it needs three procedures (DEPLOY, EXECUTE, UNDEPLOY) to be able to use privacy coins in EVM blockchains’ dApps:

Executing three transactions may also increase the likelihood of failure, expensive fees, and lower speed as compared to executing a single transaction only.

Also, moving the returned funds from an EVM chain to the same Incognito payment address (UNDEPLOY) would break unlinkability and even untraceability.

Lastly, users need to manage EVM keychains for receiving funds after DEPLOY procedure and signing needed data during EXECUTE, UNDEPLOY procedures. This is friction in UX that needs to be solved by using temporary keychains managed by the Incognito team that reduce decentralization.

The problems described above indicate that there still is room for improvement and the main question is: what if we merge the above three procedures into a single transaction? 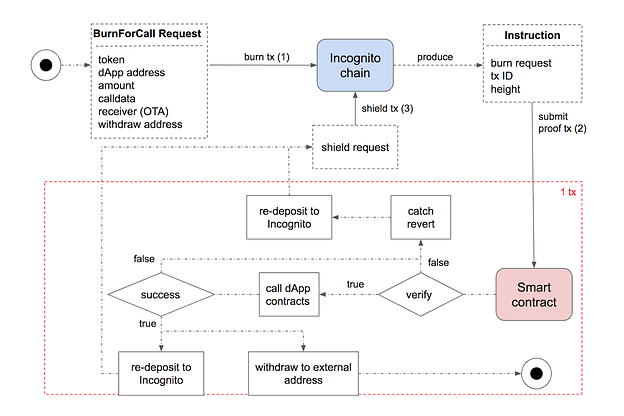 In essence, the main workflow, illustrated in the above diagram, doesn’t change much compared to the old one:

Let’s only analyze changes to see how the new design improves the aforementioned problems:

In this topic, we’ve just discussed the known problems of pEthereum’s old design and proposed a new design to address them. We expect that the improvements will bring much better experiences (a.k.a faster process, lower fees and better failure handling) to users when using Incognito’s cross-chain products, especially the Universal Swap.