We are so excited to announce that the privacy multi-chain with the unified privacy token is now live!

Incognito, with the mission to bring privacy to crypto users, privacy on assets, privacy on activities, and now privacy on multi-chain.
With all our effort working from idea to design and development, from now Incognito users can use their privacy tokens regardless of their networks.

In order to read more about the main idea, as well as use cases of the protocol, you can find them in our previous posts:
Unified privacy tokens and interoperable apps >
Privacy multichain: use-cases, caveats and solutions >

Changes on the app

Now, let’s go through the benefits as well as the different experiences on the app that the protocol offers to Incognito users.

Before, users had to manage N different pTokens (privacy tokens) were shielded from N different corresponding networks, even though they have the same currency.
Now, users only need to manage one unified pToken for one currency.

And of course, users can use their unified pTokens like pTokens for transferring, swapping (especially cross-chain), adding pDEX liquidity, staking, providing service, etc. 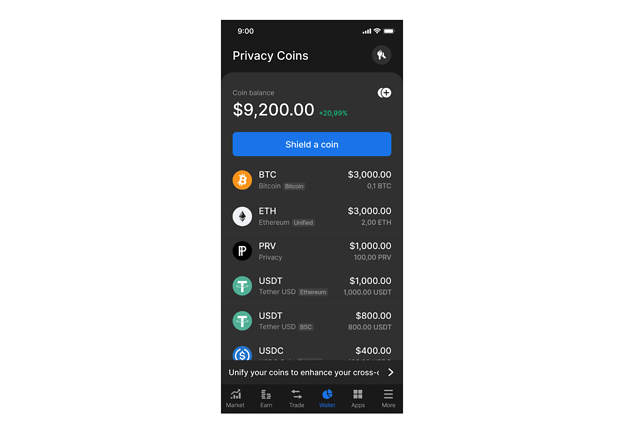 If you are looking for the solution to manage your crypto securely and conveniently, the Incognito wallet is a thing you should try. Any tokens, any networks all are in “one place” with privacy by default. In addition, if you have the desire to swap your current tokens for other tokens (despite different networks), you can do this right on the Incognito wallet through the Incognito exchange or pApps.

In this release, the first unified privacy tokens are ETH, USDT, USDC, DAI, and MATIC on 3 networks (Ethereum, BSC, Polygon).
From now, users can shield these above tokens from arbitrary supported networks.

Now, let’s see the shielding steps.
Quite simple and quite familiar. As we mentioned in the Unified privacy tokens - New UI/UX design topic, shielding flow is quite similar to the current one, just some UI updates to make UX better. 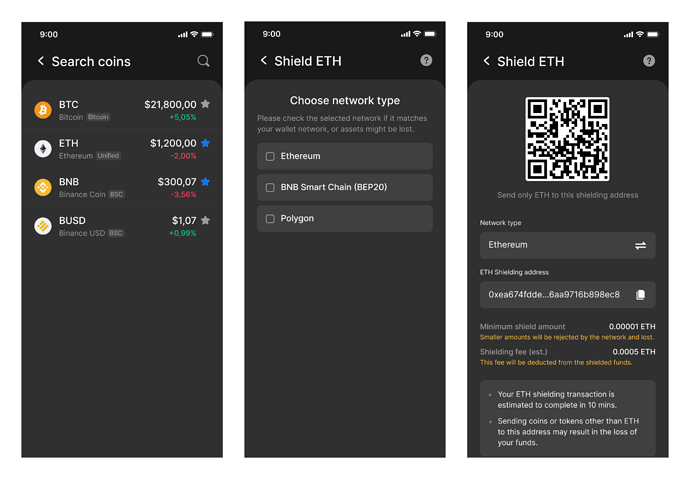 The total balance after shielding requests even from different networks will all be added to one unified privacy token.

Example:
User A shields 1 ETH from Polygon,
and then he shields 0.5 ETH from Ethereum.
Finally, he owns 1.5 ETH (Unified) in his wallet.

Maybe you haven’t known that there were some improvements to reduce the shielding processing time. The shielding transaction is estimated to complete in 10 mins (Ethereum and Polygon), 5 mins (BSC), and 3 mins (Fantom). 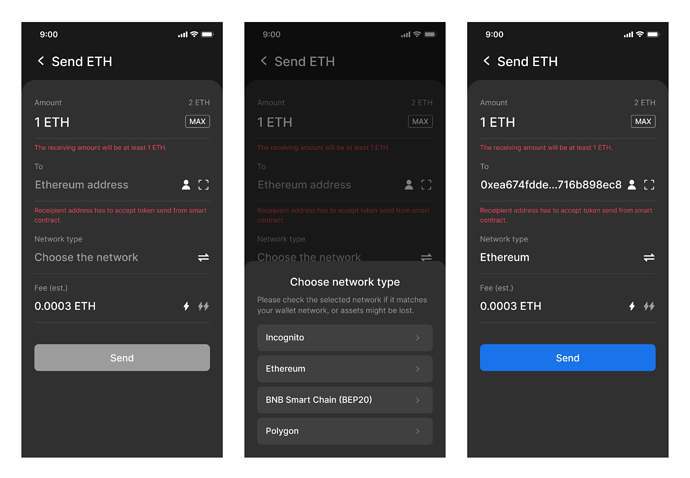 That’s all steps to unshield tokens from Incognito. Similar to shielding, the unshielding flow is also improved the processing time. It takes only about 2 mins to process an unshielding transaction.

Accordingly, the app will navigate to the Unify coins screen as below screenshots. The app will check balances and group existing tokens by currency. 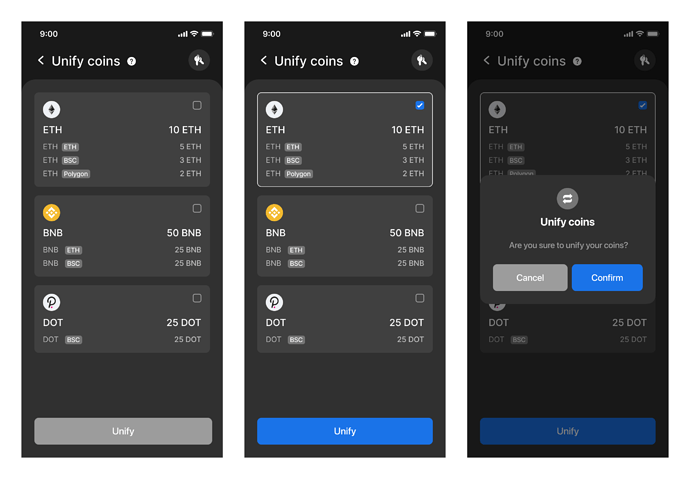 In addition, users can swap anonymously with their unified privacy tokens on Incognito exchange or pApps.

With pApps, a unified privacy token will be used regardless of which network they were shielded from.

Example:
Swap ETH => USDT on pUniswap on Polygon:
All pETH (Unified) that are shielded from any networks (Ethereum, BSC, or Polygon) will be accepted to swap.
One more interesting thing, after swapping, users will receive pUSDT (Unified) and can swap them seamlessly on another pApp even on different networks, such as pPancake on Binance Smart Chain.

The unified privacy token that makes privacy multi-chain possible, is one of the most desired features that the team can’t wait longer to deliver to users since it will improve the experience for many existing features. Let’s try unifying your assets and leave us your thoughts in the comment below.
Thank you!

I love this feature, but wouldn’t it be even cleaner if all the fragmented coins were automatically converted to their unified versions? As far as I can see, there is no reason why anyone would prefer to keep the fragmented version of a coin they possess. And why maintain the possibility of swapping unified back to fragmented?

I love this feature, but wouldn’t it be even cleaner if all the fragmented coins were automatically converted to their unified versions?

They cannot since the coins exclusively belong to you. They have to know your private key. They might implement some workarounds but you know every workaround is articifial, risky and maintenance-costy

And why maintain the possibility of swapping unified back to fragmented?

Simply they do not but some liquidity providers in pDEX do. There are some pairs with old coins.