Don't miss it! RSVP for the upcoming PRV Holders call

It’s easy to get caught up in the day to day, but when we take stock at the end of every month, we’re continually excited to report – Incognito is growing, and people care about privacy. We’re proud to be part of this movement sweeping the globe.

Whether it is to trade, invest, stake or simply hold crypto anonymously – users must take the first step to shield their assets. So, are people using Incognito?

$4.6M of crypto in 88 different currencies entered the Incognito ecosystem in July. Our total shield volume to date is $12.5M. Here’s how utility has grown since the mainnet launch in Nov 2019. 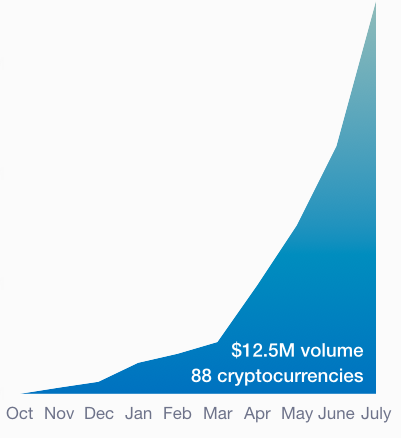 This month, we devoted resources to fortifying the pDEX. Designed to solve some of the issues plaguing the original liquidity rewards program, the new pool product Provide channels funds towards pDEX liquidity and makes the ecosystem stronger. 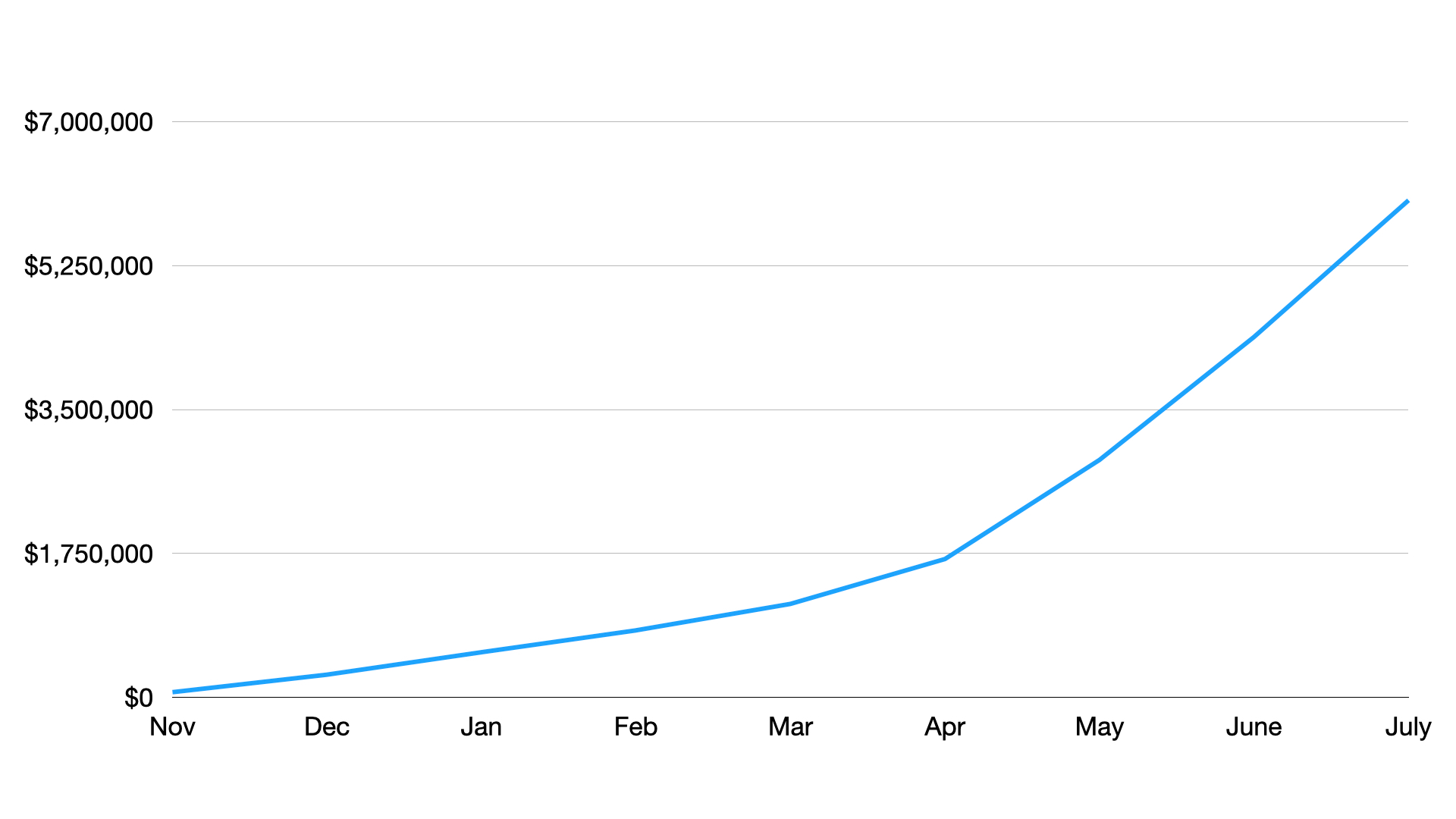 With pKyber, our combined liquidity is now $12.9M, and with pUniswap coming up soon, this is just the beginning.

Here are some other significant developments.

In July, we focused on the bones of the project. More network resilience, improved app and node performance, and increased adaptability for multiple eventualities.

We began implementation of dynamic committee size and dynamic sharding. The chain will soon be able to better adapt to multiple different scenarios, such as unavailable nodes, disconnection, inadequate power, and varying numbers of nodes over time. Node operators will soon be able to unstake at any time without compromising the security of the network, and this lays the groundwork for eventually dissolving the fixed committee setup.

Safeguards were installed to ensure security and stability, starting with a monitoring and alert system for all API/status requests. We are now focusing on fullnode performance and back-end API (Shield/ Unshield processes). We also tidied up the interface, released some new features, and improved loading and caching.

The speed of data insertion has now caught up with the speed of data synchronization, and for Node operators, this means greatly improved initial sync times. Times were reduced by 87% for beacon, and 79% for each shard.

Community development didn’t slow down either. In July, we saw great updates to existing products, and welcomed a few new builds and builders to the party.

@raz has begun work on a very sleek web wallet designed especially for investors, in addition to his helpful community website and Node watcher.

@inccry continued to build out the beloved network explorer, including a PRV price evolution chart, as well as an advanced view for the real privacy geeks among us.

@josh_hamon’s friendly telegram bot Nito keeps you updated on what your Node is up to, and is currently helping out over 10% of all Incognito validators.

@bruno’s Incognito calculator is a beautiful web app for validators. It gives an overview of your staking activity, your earnings, the real-time PRV price, and other useful information.

@incsmile’s ambitious pApp platform is designed to enable developers to build their own privacy applications upon base functions defined in the pEthereum spec.

@taind has just released a clever MVP of his web wallet, with send and receive functionality. In August, we’ll be seeing a trade feature and more interface improvements.

More utility, more stability, more privacy, more security! In addition to the proposals listed below, the core dev team will also be working on internal tools to automate processes and reduce the likelihood of human error.

It’s here again! Did you make it to the last one?

We’ll be chatting all things Incognito – what’s new, what’s next, and what’s on your mind. Post your questions in advance here.

Speak then, and see you around at we.incognito.org.

I know there is a push to get more people on the network in the next 3 months, but does the core team have a plan of attack? I’m a motion designer and brand standards are my wheelhouse. But, I haven’t really seen anything out there about the message we want to send. Its kinda hard to develop a unified message without a plan of attack. I’ve seen some great artwork from the community, but it comes across as a little amateur if everything looks drastically different. I’d be happy to start designing some stuff. But, I need a plan of attack so the designs aren’t constantly changing. The logo change is a prime example of a sudden change. What was the thought process behind that, and how can an all black icon be used in messaging?

Hey, @Thriftinkid, good question! Privacy seems to be the main message. The white paper does a good job summarizing.

Hey @Gold. I took a look. The message of privacy I understand. I guess I mean what is the “face” they want to portrait? A movement should have a unified front when it comes to branding. Logo at minimum, colors would help, or even tag lines. “Privacy” is cool from a rebel approach. But if you want to grow, you need basics in marketing. What are bloggers going to show on screen if even our logo is just black lol.

Hey @Thriftinkid Thanks for sharing your thoughts, I think it’s good points to think about.

Let me share some thoughts on where we could move from this point.

Target 1 - the majority of users, non-technical, no need to understand how it works

From my point of view, the fear angle is clearly understandable for the majority of people.

Target 2 - a minority of users, non-technical, but want to understand the difference, and how it works.

Something similar Coinbase did for Zcash. Please the videos (there are 3 quick animations)

Let me know how is it sound for you? Which is a good angle to attack ?

Hey @andrey, these are great examples. Maybe I have to back up a bit here though. The two messages you posted above are great reasons to join the network. While people may not understand how exposed their cryptocurrency is, everyone understands the important of privacy these days. They understand their accounts get hacked, their data is collected/sold, etc. So there is already a nice connect for us to the user. However, as a new user, how do they know who we are? Why should they trust us? The coinbase explainer video is a great example for a lot of reasons. They walked the user through step by step to explain the problem and their solution. However, there’s way more behind that video. First, They started and ended with their logo. The goal is to leave the user remembering their name. Not necessarily the problem and solution. All they want the user to remember is there is a problem, and coinbase has the answer. Secondly, there colors and fonts are spot on. Simple to read text, and it seems like they have a basic color palette of white, blue, and yellow. Not only are they uniform with those colors throughout they video, they relate back to their logo pages on the front and end. The beginning is blue on white, and the end is white on blue. Diving deeper into that are the colors themselves. People naturally associate certain colors to feelings. Their color choices make them appear trustworthy, safe, and reliable. There’s a definitely a rabbit hole to go down here, but these things are really REALLY important when you are building something from the ground up. Those elements can be used on all marketing no matter what the topic is. The name of the game is the user has to trust incognito as a brand before they even want to hear what were selling. Consciously or subconsciously. I attached a color chart. Its an example of other company brands and s a some of the words a person might associate with them. If you guys really want to deep dive a little more. We can chat on the side too if you’d like. 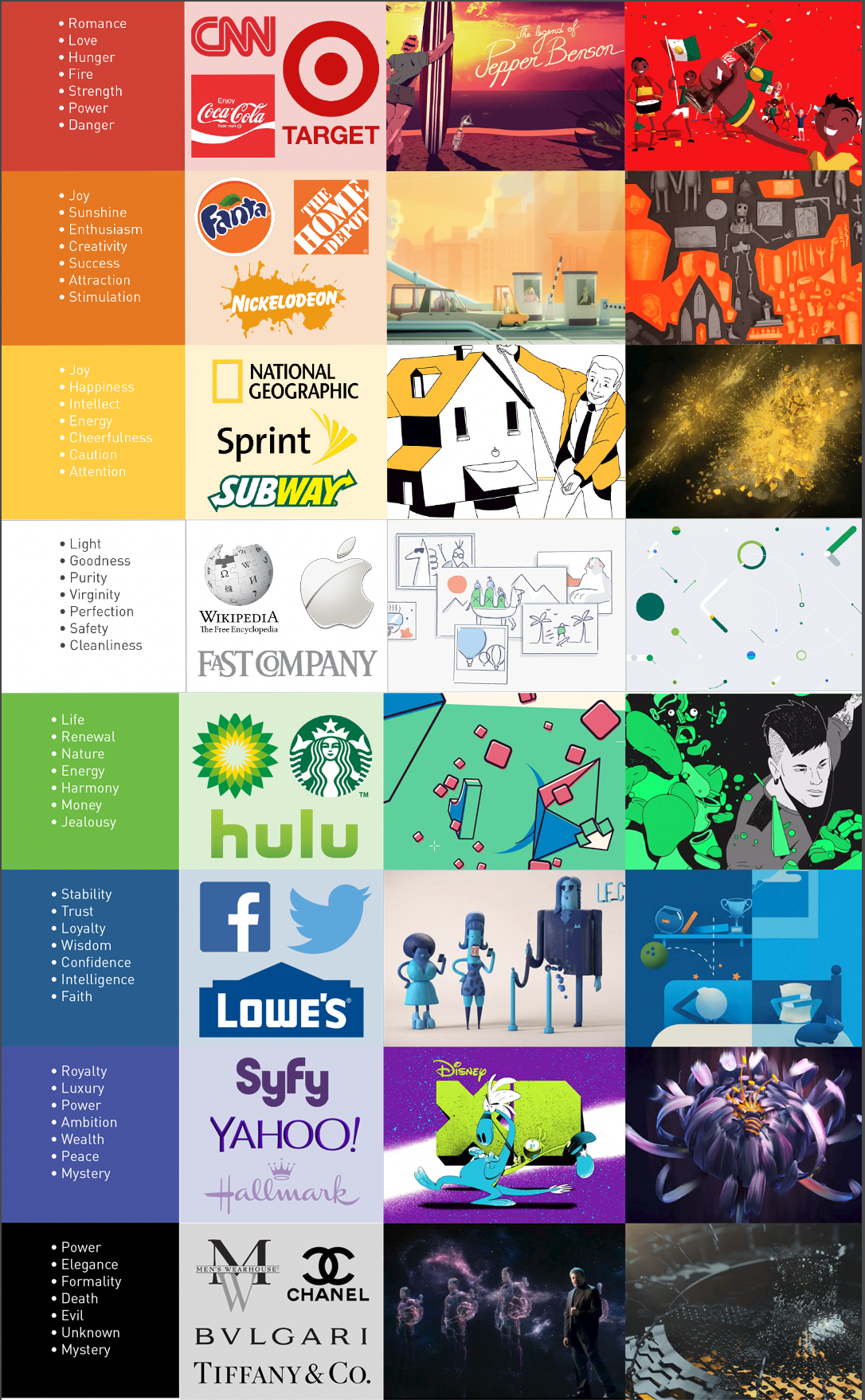