In this topic, we are presenting an improvement in block production that would help address:

For each shard, only a subset of its committee list will be picked to create a new block, as the following rule: 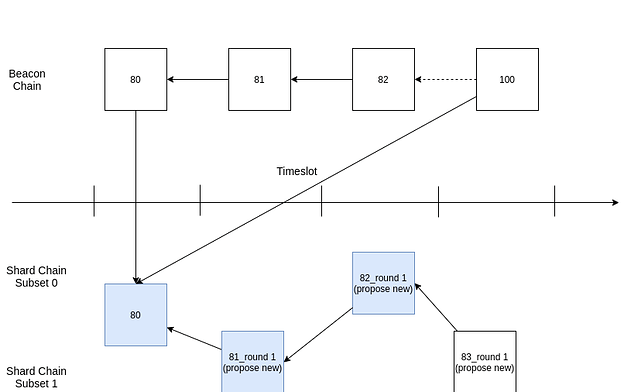 The Above picture illustrates 2 subsets from shard0 take turn to create block:

The chain retains the same level of security.

32 validators of each shard are split into 2 subsets of 16 and each block will be validated by only 16 validators? How is this supposed to retain security? Correct me if I’m wrong.

Plus, how are rewards calculated when spliting the nodes? Will rewards be the same as the regular method?

Sorry for the confusing.
If there is any application trusts the block by its aggregated signature without validating its content, then this mechanism reduces security.
This special case is beacon block, the signature is used to unshield asset to other blockchain. There will be secuirty concern if we apply this to beacon chain.
However, this mechanism applies only to shard, and when inserts shard block the node need to validate the correctness of the block, so malicious shard block will be rejected eventually. And currently, there is no business logic relies on shard block signatures to make security-related decisions. That is why we say the security still retains.

Regarding the reward, a committee from a subset is rewarded based on the number of the blocks created from that subset.

Regarding the reward, a committee from a subset is rewarded based on the number of the blocks created from that subset.

Do this imply that with the same probability of being chosen, a validator now only receives half the regular reward?

Actually, it is the same. The reward for a subset will be half the regular, but when it is distributed to only 16 nodes, the reward per node will be same.

How is this supposed to retain security? Correct me if I’m wrong.

As the block, created by one subset, will be validated by another subset before inserting. In the worst-case, if one subset creates false blocks continuously, none of these blocks can be finalized. At the end, the Beacon chain would apply slashing penalty to the faulty nodes.