Currently, in order to enable a new feature, we set a checkpoint and hope all nodes update its new code. There are two problems with this approach:

We’re proposing an approach that allows chains to enable a new feature if and only if majority nodes agree on that feature. In addition, outdated nodes might be aware of the newly enabled feature, then notify the node operators to update their nodes via system log.

Beacon proposers monitor the network, and when majority nodes run the new feature, the beacons will generate EnableFeature instruction, so that the new feature will be automatically enabled in the network. When an outdated node inserts a beacon block including the EnableFeature instruction, it will stop running and require the node operator to update new code.

This expresses that after block 25,000, if feature1 is not enabled and the number of updated nodes is greater than 90%, then the beacon would generate an EnableFeature instruction in a beacon block. 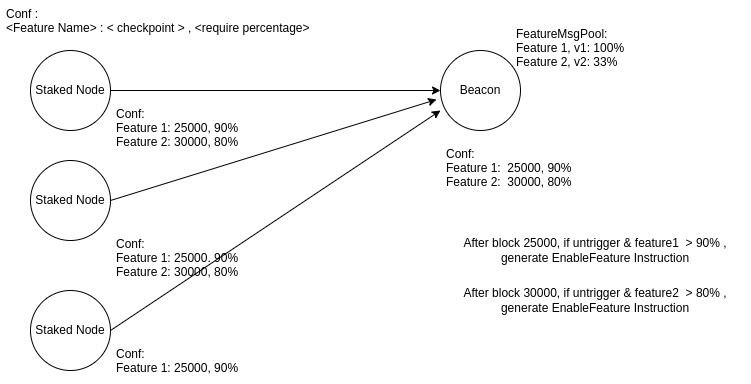 We are toward fixed node dominance reduction, which means foundation nodes won’t hold the majority of the network’s committees and leads to one requirement we need to address: how to keep the network stable while still actively releasing protocol updates for new features and improvements. Hope this proposal could help the protocol update process be safer.

A validator node that inserts the beacon block, does not recognize the new feature instruction (against its config file) will stop processing and require the node operator to update new code.

Are nodes that do not recognize the new feature instruction slashed? Or is this a new state/cycle – Sync, Pending, Committee, Slash and now Stopped? Paused?

When the network generate new feature, it means the majority of nodes is agreed and updated the new code. If your node is in the minority group that does not updated the code, then it will not participate in voting and will be slashed eventually.
There is not any new state, the node is required to stake again.