Shielding is the process of locking an amount of a public token to acquire the same amount of the corresponding private token inside the Incognito network. It is the mechanism for users who want to achieve the Incognito privacy level for their public tokens. Since the introduction of Privacy V2, Incognito users have been experiencing a fairly higher level of privacy, with the ability to hide transaction amounts, senders, recipients, as well as asset types. However, at the moment, shielding encounters a problem of address re-using. That is, the locking address for all shielding requests from the same user is the same. This is undesirable because it is easy to determine whether two shielding requests belong to the same user or not. Fortunately, this problem can be addressed by employing one-time addresses.

Before we get into the details of the solution, let’s take a look at the properties that each Incognito transaction type achieves, and then see how employing one-time addresses might increase the shielding process’s privacy.

Table. A summary of each transaction type in Incognito
(* depends on the interacting network)

From the table, one can easily observe the following.

Next, we will quickly recap the current design. To shield a token from a Public Chain into Incognito, a User must proceed with the following steps. 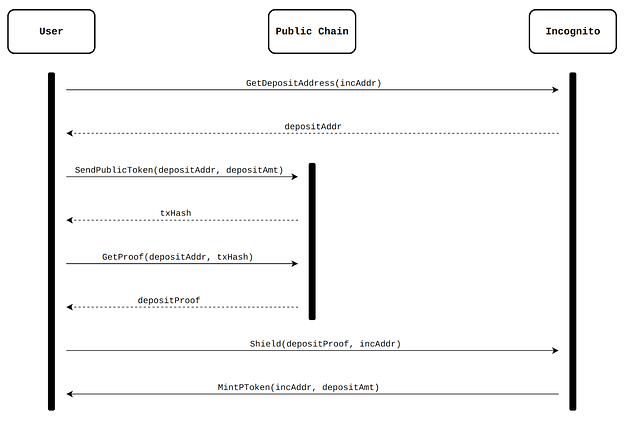 As we can see in Step 1, the incAddr is used every time the User wants to shield an asset. Therefore, for two separate shielding requests, the same depositAddr is generated. Therefore, one can tell that these requests belong to the same User.

To address this problem, we take advantage of one-time addresses to generate newly depositAddr every time the User wants to perform a shield. In the next section, we explain in detail the solution.

The idea is simple: let the User generate a one-time depositing address each time he deposits money into the Incognito network. The new flow is described in Figure 2 with the following steps. 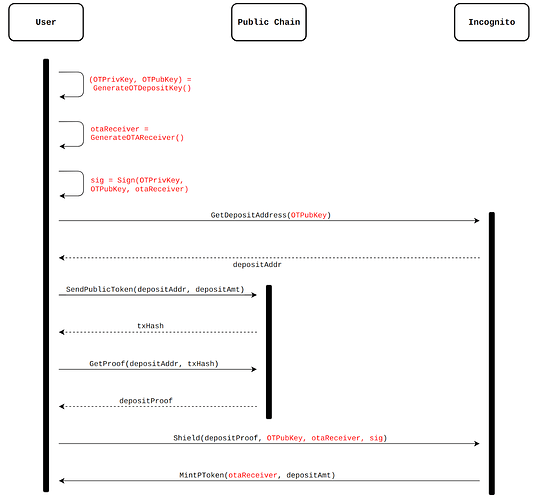 In this new design, we introduce the following new terms:

The replacement of the incAddr results in a problem of key management. Since a fresh (OTPrivKey, OTPubKey) pair is generated for each shield, we need a wise method for generating, managing, and checking if the key pair has been used. Randomly generating this pair is not a good solution, because we do not have an effective way to retrieve which pairs we have used, and thus cannot rebuild the shielding history.

To address this problem, we can employ the idea of HD Wallets or the BIP32 proposal, in which we have the pairs generated using a master key (mKey) and an increasing index. The mKey can be dependent on or independent of the private key, the latter is a better choice in terms of key management. For example, mKey can be generated as follows (details will be updated soon): 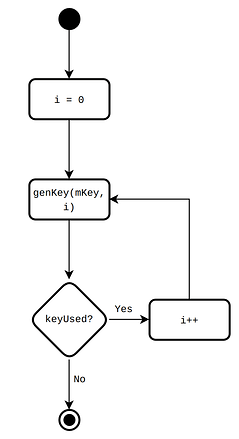 Starting at index = 0, we try to create a child key pair and check if this pair has been used. If yes, we increase the index by 1.

With this design, Incognito is now becoming more and more robust. Please tell us what you think about this design. Comments and recommendations are wholeheartedly welcomed.

This is a huge improvement—happy to see one-time addresses returning to the Shielding process by leveraging asymmetric cryptography and proven BIP32/hierarchical deterministic wallet design. No need to reinvent the wheel! Also, can adoption of BIP32-style key management aid in the integration of hardware wallets into Incognito?

Also, can adoption of BIP32-style key management aid in the integration of hardware wallets into Incognito?

I can’t say because there’s no plan for hardware wallets at the moment.

I can’t say because there’s no plan for hardware wallets at the moment.

What about the Ledger work that was put on pause until Privacy v2 and pDEX v3 were completed?

Hi, my apologies for keep this up to date, for the last 2 months we have been busy working hard to complete privacyV2 and making it ready for the mainnet. This ledger intergration is intended for privacyV2 only, so the intergration have to wait until we completed privacyV2 for the mainnet and the current mobile app, which nearly done. PrivacyV2 is a big update for Incognito network so we need to test it carefully before release it on the mainnet. Thank you for your understanding.

Hi @Mike_Wagner, what @Daniel said is correct-ist, as we doesn’t have a solid plan for hardware wallet yet, nevertheless it’s on our todo list. pDEX v3 were already deployed but not completed yet, there are more things needed to be done to improve its current UX both on chain and the app (as you can see the app is slow), we doesn’t want to have half-done/near-completed feature lie around.

Sorry, I’m not a very technical person so a lot of this went over my head, however I do want to approach this topic from a completely different angle.

Don’t get me wrong, I’m first a foremost a privacy advocate, but for those of us that do not want to hide from the tax authorities and want to be a law abiding citizen that does not want to evade tax, we need to ensure there is a way in the app to export a CSV file with all taxable event details, below are some examples:

You get my drift, above is just a shortlist and there may be additional Tax events that require some level of reporting.

So, my concern/question is, will this new improvement and use of one-time addresses impact the Incognito’s reporting capabilities for Tax Reports to regulators?

What about the Ledger work that was put on pause until Privacy v2 and pDEX v3 were completed?

I’m glad to brought this up @Mike_Wagner

I too have been wondering when Ledger Hard Wallet integration will be put back on the roadmap. @Jared , could you please ask the Devs when you next meet with them?

Regarding ‘Growth Marketing’, by integrating with Ledger Hard Wallets, I feel this would catapult the Incognito brand to new heights as it builds upon this project’s focus of “Self custody” and “security”.

I feel it would bring a lot of attention to the project and would build more awareness thus attracting a NEW wave of users to the platform.

Can you imagine someday, being able to sign a contract via Ledger Nano hard wallet to add liquidity to a Provide pool?

I feel this feature alone would set this project far apart from SCRT and RAIL.

I do realize there would be a lot of work involved to make this happen, so it would be nice to see it on the roadmap.

@daniel @support
Any updates on this or a timeline/targeted Incognito app version for release?

Just got reminded of the value of one-time addresses today when a withdrawal to Incognito was blocked by a CEX (“We’ve noticed you’ve attempted to transfer funds directly to a prohibited service.”) This was my mistake–I almost always use an intermediate wallet with one-time addresses but copied the wrong address. smh

Interesting. I will bring this up with the devs.

Any updates on this or a timeline/targeted Incognito app version for release?

We’ve have finished implementing the protocol at the chain-side and it’s being reviewed. For integrating with the App, we’ll update to the community soon.

Cheers to @daniel & the other Incognito developers for all your work to continually improve the tools from which we all benefit.

AFAIK, the protocol (+ go-SDK & CLI tool) might go live in Q1 but app integration is scheduled to Q2.