We need a tutorial created for How to Use the pDEX. In particular for new users.

Anyone up for the task? I’m sure a DAO proposal could be created for a good project.

Maybe something on YouTube that could be linked to directly within the app? 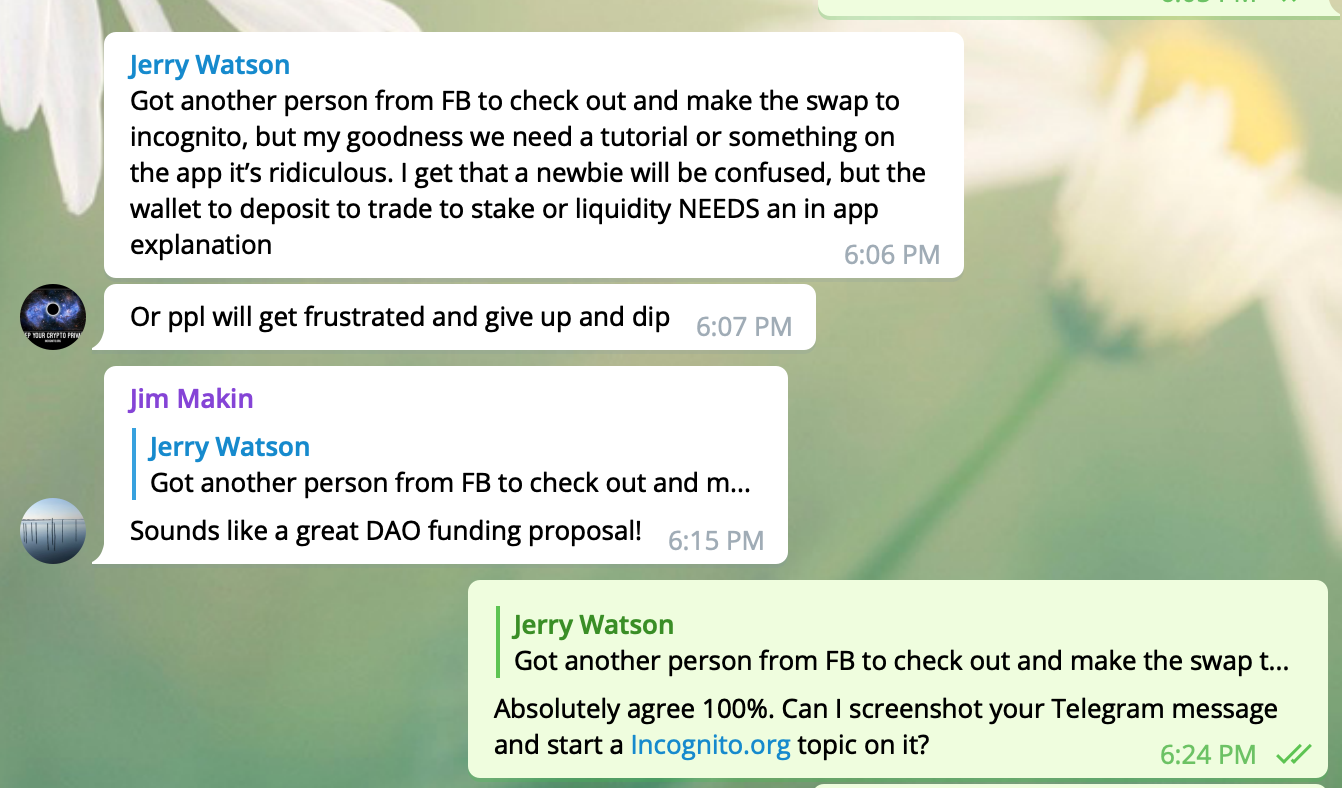 I think a tutorial would help immensely! Should it wait until they launch pdex 2? I think @duy said v2 should go live in two weeks. Lots of good changes coming!

yes, this would be awesome! pdex v2 will be launched in a couple of weeks. it would be great if a community member wants to take on this. i’m sure the DAO would love to fund this. cc @andrey @tien

Hi @Mike_Despo yep, that would be awesome if someone could visualize it!

Feel free to use this info as starting point for the tutorials:

There is some dicussion on the subject already, among some team members, even came up with the name Incognito Academy.

There are a lot of aspects to the project, it easily overwhelms new people, but even people who are more or less familiar with crypto in general need help, coz Incognito is often doing things in a different way.

There is one major issue that prevents me from writing a proposal right away:
people don’t read

I am sure some people will argue they themselves do read, but the majority doesn’t.

So what is next?

A lot of effort has already been put in writing different tutorials and howto’s. Before we waste more time, money and effort on a new source of information that will not be used, we need to determine what format fits the users best.

These are my thoughts while thinking about how to improve information usage.
If someone else wants to give it a shot, go for it!

9 Likes
Provide an indicator in the wallet to indicate pnode status
[Shipped] Content Support for Core Team
Jerry_Watson May 14, 2020, 11:38am #6

I really, truly like the name incognito academy.
This is where my idea of a mascot could come into play that “shows you around”

Does anyone know the best way I can record myself doing things on the Incognito app on my phone? Like, “screensharing” my phone into a video that I can publish as a tutorial on YouTube? @raz?

@Bruno knows about these. Could you help out Mike?

We recorded a couple use case in the app.
But these not tutorials just some presentations.

Check the spotlight page: incognito.spotlight.page
(The optimization and loading screens in progress)

If required we can create a detailed video tutorials.

You can simply cast the phone to the desktop screen and enable screen recording there. I did so.

Watch from 4:30 - there you can see the wallet screen recording from the phone.

I have an extensive background in education, and I can tell you that what @Jamie says is true. A lot of people don’t read. At best, they skim and miss important detail.

It’s even worse when the information is divorced from the actual thing they are trying to learn; “divorced” meaning they learn in one separate area, and apply the knowledge in a completely different area. Sometimes they aren’t even aware this separate learning area exists. (I can’t even tell you how often people don’t even think to google things.)

Often the best approach is just-in-time learning. This means you deliver the lesson right when the person needs it. For example, if they need to learn how to use the pdex, then the tutorial should be right there in the pdex–not separated off into some virtual classroom. This is why I like @Mike_Despo’s suggestion of linking to the video (or whatever the tutorial ends up being) directly from the app–directly from the pdex. That way, when someone is trying to learn pdex, the information is right there, right at their fingertips, right when they need it.

Hopefully this provides some insight that could help deliver learning material on the Incognito platform.

If you happen to have an iPhone with iOS 11 or higher, you should be able to record it right from your phone.

Apart from blockchain, stake, Incognito, account, and pdex, I am not too sure what you are saying but it is a great recording.

Oh this is interesting. However… how do I cast my phone to my desktop? I’m sure I could google and find the answer, but what @Gold pointed out about education is true. Lol.

Sigh, I guess I’ll Google it…

I use the Huawei phones and the application HiSuite allows me to do this with ease.
You can use Screen Cast from PlayStore

@Mike_Despo, one thing you could do is join a Zoom meeting with your phone, cast your screen, and record. There is likely better software out there, but I’m just thinking about software you might already have.

Yep, it sounded like that. Unfortunate a language I am not familiar with.

Is there a way to access the PDex on a desktop computer rather than my phone?