Here are some new updates on the progress of Incognito’s interoperability with unified privacy tokens.

In the previous post, we shared the main idea of Unified pTokens feature, as well as the benefits that it brings to the community.

Now, let’s go through the new UI/UX design for the initiative.

After the feature is released, users can convert their existing privacy tokens to unified privacy tokens, then takes action on them more conveniently and with more benefits.

To convert tokens in the app, select Settings in More tab, and then tap Convert. 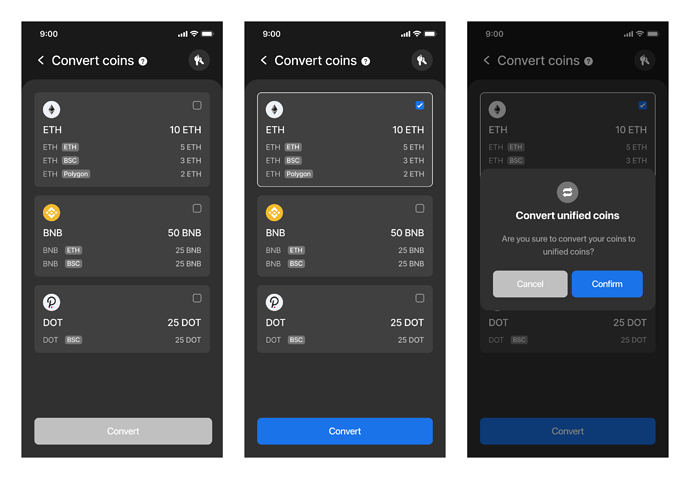 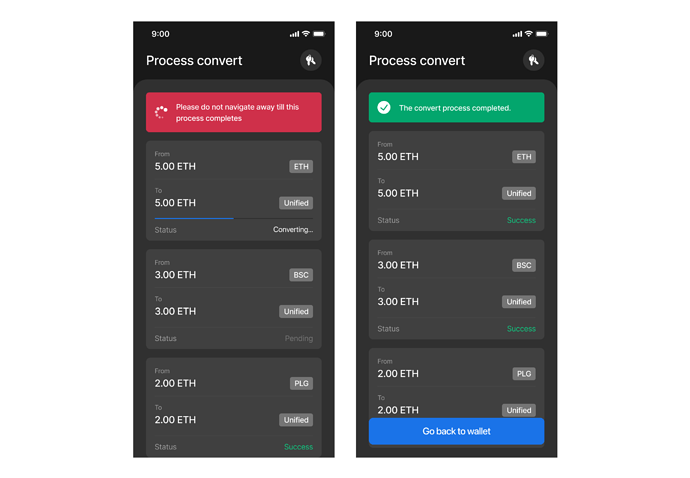 When the conversion finishes, users will receive back unified ptoken with a new balance equals to the sum of the grouped privacy tokens’ balances. Users can both transfer privately and swap anonymously with the unified pToken (of course with all balances).

Note:
In the first release, the protocol will only support unifying popular tokens (e.g ETH, DAI, USDT, USDC, MATIC, …). The list of supported tokens will be published when the feature is officialy launched and updated usually in the future.

One of the biggest advantages that users can benefit from this new feature is that it enables users to shield unified pTokens to Incognito from any networks that the protocol supports.

Basically, the UI/UX for unified pTokens shielding flow is quite similar to the current one and adds in some updates to make it clearer and better in terms of users’ experience. The new UI will be generally applied to all tokens (including not unified pTokens). 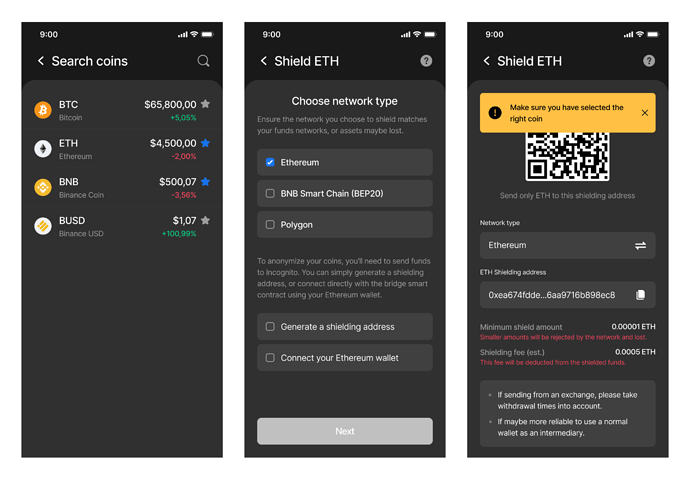 As a result, now that he has 2 pETH (unified pToken) in his wallet and can send, receive, trade, provide, etc. privately in Incognito network.

Conversely, users can unshield unified pTokens to get their public tokens back. Different from the current approach, thanks to the unified pTokens feature, users now can choose any networks (which are supported by the protocol) to receive tokens withdrawn from Incognito. 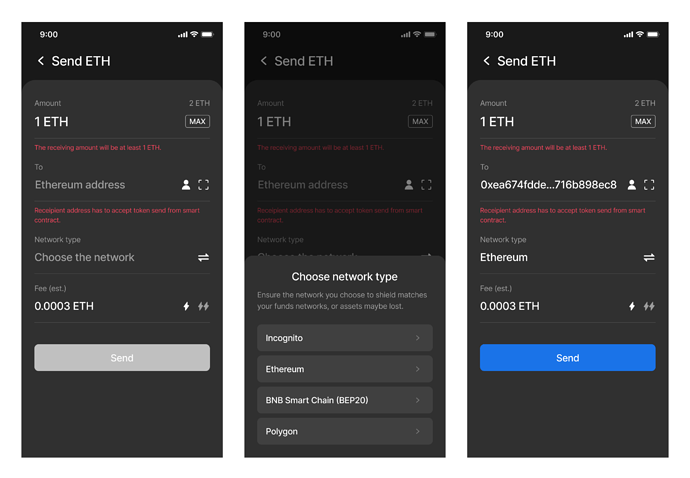 That’s all about UI-UX for unified pTokens!

We are looking forward to having your instructive thoughts and feedback. Let’s share with us via comment below. Thank you.

Thanks again for this awesome feature. Now, questions

1- How have you solved this problem?

How will you manage unshielding of multichain coins? Let’s assume that Incognito has 10 ETH (native) and 10 ETH (BSC) in its vaults and somebody wants to unshield 15 ETH (BSC). In such cases, what will happen?

2- Will you re-organize pDEX pairs to use the new unified tokens? Or will the whole process be managed by pDEX module?

3- What will the old un-unified tokens be? Their association with the real assets will be broken later. I think shielding to those tokens should be disabled to prevent confusion. Right?

Not directly related to this awesome feature and I know you want to keep “Shield” word. However, like “Send” interface, how about merging “Receive” (Incognito, Ethereum, Polygon …) interface instead of another screen just for Shielding? So just Send and Receive buttons will exist.

Hi @abduraman, thanks for your great questions!

1. Unshielding but vaults are not enough?
We have built the re-balancing vault mechanism. The main idea for the mechanism is derived from the AMM protocol (but not for trading). The mechanism’s technical details will be updated in the other post.

But it doesn’t actually resolve your case. In this case, you can’t unshield 15 ETH once time with the current vaults: 10 ETH (native) and 10 ETH (BSC). You should unshield 2 times. First, unshield 10 ETH to BSC. Then, the ETH vault on BSC has high demand, so the great rewards will be paid for anyone shielding to this vault. You can wait until the vault is grow up and unshield 5 ETH left to BSC. If you don’t want to wait, you can unshield the remaining to the Ethereum network.

2. Unified pTokens and pDEX?
First, the unified pTokens feature is independent of the pDEX. It means that after releasing this feature, the pDEX’s pairs with un-unified pTokens (old pTokens) won’t be affected.

There is a little different UX between “Receive” and “Shield”:

So I’m not sure merging “Receive” and “Shield” will be better. But anyway, thanks for your idea. The team will consider this for the next update.

If there is any feedback, feel free to share with us. Thank you.

Just trying out this feature for the first time. This is a really awesome feature! Hoping to learn more about it as time goes on, well done guys!