Incognito will support Kardiachain (KAI) at 2022-06-21 07:00 pm (EST). Users can now start shielding your assets into Incognito to buy, sell, and transfer KAI with a high level of confidentiality. 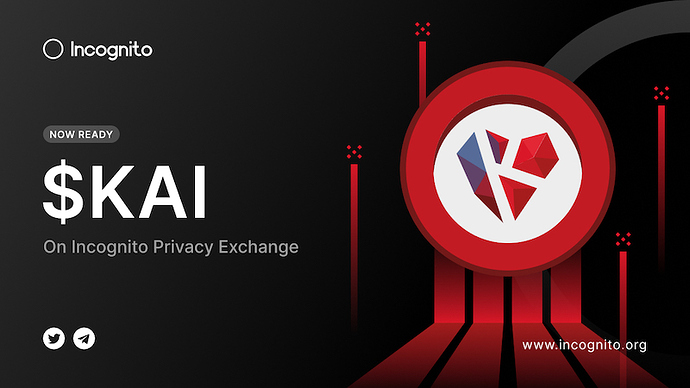 The innovation of Blockchain technology has demonstrated great future of utility over various fields including finance, Internet of Things (IoT), identity management, governance, web-decentralization and asset-tracking. However, despite all the promises and grand talk, we have yet to witness the globally significant real-world deployment of this cutting-edge technology. Undisputedly, there are multiple factors in play. Kardiachain aims to address the three most prominent issues with Blockchains: Interoperability, Scalability and Developability. The ultimate goal is to provide a unified infrastructure leveraging the collective strengths of all participants, paving the way for the upcoming Blockchain mass adoption scenario.

Kardiachain facilitates cross-chain communication through its Dual master node structure which enables the native chain to collate arbitrary data/transactions from its own ledger and those of other connected chains without having these connected chains technically modified. This is a potentially more effective non-invasive approach compared to other layer-0 protocols such as Polkadot or Cosmos.

Thanks to the nature of interoperability, Kardiachain could adopt a highly sophisticated 3-dimensional scaling solution by putting emphasis on Transaction routing and Function scaling while utilizing sharding structures of the existing networks instead of sole implementation of on-chain sharding.

II. How Does Incognito Benefit The KardiaChain Community

We provide a privacy layer to the KardiaChain Community and KAIDEX users in particular — giving users the ability to trade, send and receive KAI anonymously. On top of that, they could cross-chain swap and interact with popular dApps such as pCurve or pUniswap directly, all within the privacy realm of Incognito. The integration per se represents another major step towards decentralization and cross-chain compatibility.

Incognito is a global community of privacy-minded builders seeking to protect the world from surveillance and control. We build privacy-protecting, blockchain-based financial products for the future of money. All of our development is open-source. Our ground-breaking network was built on the premise that crypto traders and consumers need privacy for their existing cryptocurrencies, rather than new tokens with privacy. Incognito was built to provide users with the best of both worlds, enabling them to trade their favorite coins and enjoy full confidentiality of all transactions

Download the Incognito app and start trading with confidentiality: