Incognito’s goal is to deliver privacy, not just for digital assets, but also the financial applications that give them utility. Those who follow Incognito development will have seen the dev team working on certain building blocks – bridges to Ethereum, Binance Smart Chain, Polygon, etc. and privacy for apps like Pancake and Uniswap.

Multi-chain support is one of Incognito’s stronger points. However, these building blocks are still disparate, and as a result, so is the Incognito ecosystem. Liquidity for example, is fragmented across different chains, UX suffers, and traction is stunted.

This next stage of core development will establish seamless relationships between every privacy app and token on Incognito – a privacy hub for web3.

pTokens will no longer be tied to a given chain. For example, pETH will be the unified token for shielded ETH – whether that’s via the Ethereum bridge or the Polygon bridge. Unified pETH will be usable across different pApps, regardless of the chain those apps are bridged from. pETH holders will similarly be able to unshield ETH to the chain of their choosing.

This will bring significant UX benefits and open up new possibilities.

In the current system, shielded tokens are specific to their originating chain, which isn’t just a headache to manage, but also restricts the applications they can be used in. For example, pETH shielded from the Ethereum Chain cannot be used in pPancake, a Binance Smart Chain application.

In contrast, a unified pToken can be used in all pApps, regardless of which bridge is used to shield the public coin.

Currently, liquidity added to the Incognito exchange is fragmented. It’s less than ideal for traders, as well as inconvenient for liquidity providers.

To state the obvious, a unified pool of pETH/pDAI will result in lower slippage due to higher liquidity. Unified pTokens will also allow liquidity providers to add liquidity to the same pool, even if they shield public coins via different bridges. It’s a far more efficient way to use and grow liquidity.

More flexibility for unshielding (and for other chains)

In the current design, unshielding is inflexible and often costly. For example, a user cannot unshield pETH (ETH) via the Polygon bridge to reduce fees – only Ethereum. pETH (ETH) also cannot be unshielded for use in Polygon dApps.

Unified pTokens allow greater flexibility – not just on Incognito, but for privacy advocates on any chain. They can hold their tokens privately and exit easily to any chain that supports that currency.

Every project in this industry has its strengths and weaknesses. Our focus is on building privacy-first infrastructure that allows these projects to lean on each other, giving any privacy-minded individual more opportunity and utility. We think we are well positioned to do that.

Made possible by unified pTokens, the first two pieces of essential infrastructure are the Privacy App Hub, and Privacy Assemblies. 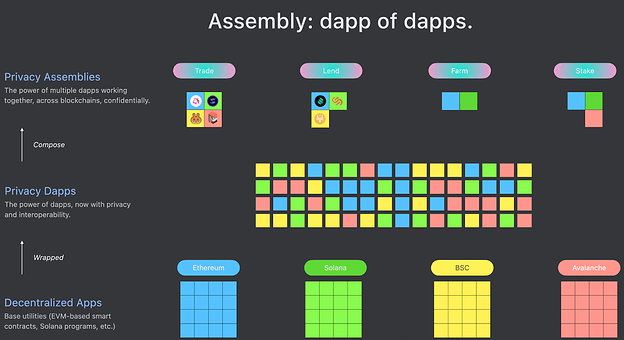 Incognito will offer a central place where anyone can privately use any dApp – regardless of which chain they’re built on. People are often told that there’s tradeoff between privacy and convenience. We don’t think that has to always be the case.

Within the Incognito hub, every app and token with smart contract support is interoperable. For example, after shielding DAI from Binance SmartChain (BSC), a user can use pDAI in Uniswap on Polygon, or lend with Solend on Solana, without the typical swaps or conversions needed.

Most interoperability solutions for dApps aim to solve single use cases for single platforms. For example, 1inch focuses on liquidity aggregation. Although its reach extends to popular networks like Ethereum, Polygon, BSC, etc, it only can aggregate liquidity from DEXs within the same platform.

In contrast, Privacy Assemblies will allow each swap to utilize liquidity from all DEXes on all supported networks. A pToken swap can be calculated and split into multiple smaller swaps if needed, then traded on different DEXs across different platforms to achieve better rates.

Using the example above, there are two main parts to this.

The Incognito team will be the pApp developers in this early stage, but any 3rd party developers can build their own pApp (with their own routing engine, for example). They can then integrate with existing dApps in supported platforms by utilizing the open Incognito protocol. Potential use cases extend beyond swaps to a range of other smart contract powered applications (e.g. lending, governance, etc).

The next stage of Incognito development will be focused on unifying disparate pieces of the Incognito ecosystem, aiming to improve UX, utility, and efficiency. This work will affect main functionalities such as shielding, liquidity provision, trading, unshielding, and interaction with pApps. We hope to have your support as we build, test, and push this out to the world.

In the following topics, we’ll be breaking down the ideas suggested here in more detail, exploring how they’ll work in practice, and detailing potential challenges.

Looking forward to hearing your thoughts. Thank you!

This is really impressive work and once released will be a great addition to Incognito’s functionality. I’m getting more and more excited with the roadmap as the days unfold. Great stuff devs!

This is beyond my dream/suggestion which consisted of just unified coins. Really bullish

I have a question. @duc How will you manage unshielding of multichain coins? Let’s assume that Incognito has 10 ETH (native) and 10 ETH (BSC) in its vaults and somebody wants to unshield 15 ETH (BSC). In such cases, what will happen?

Yeah, you are observant indeed

That’s the potential challenge I mentioned in the Conclusion section. Basically, most platforms that support multi-network withdrawal (Binance for example) also encounter the challenge as withdrawal demand to a network is far higher than others. One solution we were thinking of is to have an incentive for people who will shield to “high demand” vaults and unshield from “low demand” vaults in order to rebalance assets among vaults. We are still working on a design for the incentive and will publish it in the next topic.

Explanation makes sense to initiated incognito users, but such important explanations and descriptions of dev team plans do not clearly connect with user’s experiences in the app because there are no ptokens or pETH listed in the app given the decision to not indicate that the ETH in the app is really pETH. When developers discuss the importance of a unified pETH and new uninitiated Incognito app users don’t see pETH listed as pETH in the app, there is a disconnect. It seems important for app users to know and see pETH in the app rather than ETH (and all other ptokens as well since important changes can occur to them).