Shielding is the process of turning cryptocurrencies on other cryptonetworks (or “public coins”) into privacy coins on Incognito.

Table 1. The most popular privacy coins on the Incognito network from November 2019 to January 2020.

We have based the shielding mechanism on the experience of building our first-generation trustless bridge, between Incognito and Ethereum [Incognito, 2018]. In particular, we generalize it to enable a wider range of cryptonetworks to be interoperable with Incognito.

Incognito takes a different approach: build once, work with any cryptonetwork. The shielding mechanism operates via a general bridge design that connects Incognito to any number of cryptonetworks, allowing for secure bi-directional transfers of cryptocurrencies whenever privacy is needed. This means any coin can now be a privacy coin. This approach is especially helpful for creating interoperability with cryptonetworks that do not support smart contracts, like Bitcoin and Binance Chain.

Once the deposit proof is verified, new privacy coins are minted at a 1:1 ratio. 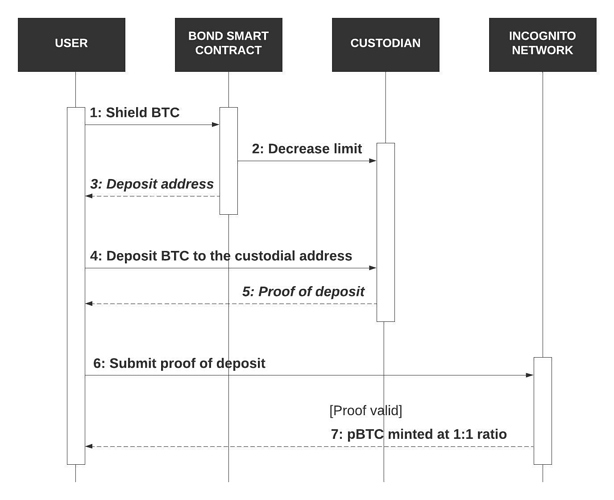 Figure 2. Shielding BTC and minting pBTC. Other public coins follow the same shielding process. Note that we simplify step 5 to make it simple for readers to follow the main logic: the proof of deposit is not generated by the custodian, but by the miners of the underlying crypto network.

Unshielding is the reverse process of shielding: turning privacy coins back into public coins.

The user initiates an unshielding transaction on Incognito with information about which privacy coins they want to unshield and the amount.

The user then submits the burn-proof to the Bond smart contract, which verifies the burn-proof and instructs a custodian to release the public coins that back those privacy coins at a 1:1 ratio.

After verifying the released proof, the Bond smart contract frees up the custodian’s collateral; custodians can withdraw their collateral or start taking new user deposits. 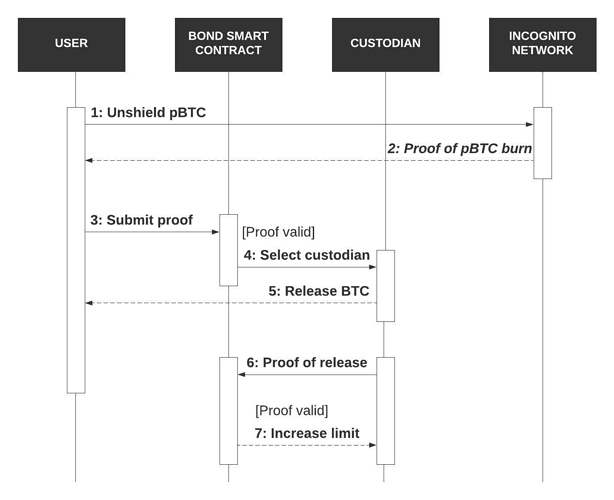 We have proposed a mechanism for turning cryptocurrencies on other crypto networks (or “public coins”) into privacy coins, based on a set of trustless custodians [Incognito, 2019]. Once shielded, privacy coin transactions are confidential and untraceable. A privacy coin enjoys the best of both worlds. It retains the value of its original counterpart and can be transacted confidentially on the Incognito network.

1 An exception is addressed in the Auto-Liquidation section in the Trustless custodians
paper [Incognito, 2019].

If i deposit BTC, later on at the time i want to withdraw the custodian don’t have any BTC, how can i withdraw BTC? Or do i have to withdraw some other coins with equivalent value, in this case who will set the price of the other coins?

Good question @dungtran! In Portal, custodians have benefits (earn shielding/unshielding fees and shield mining rewards) as well as responsibility (return public coins to users). And to become a custodian, one must bond some collateral (ETH or liquid ERC20) into the Bond smart contract with Collateral-to-Deposit ratio is initially set as 150%. So custodians do likely have a motivation to return original public coins to the redeemer. And yes, in the worst-case scenario, when a custodian doesn’t have public coins (say BTC or BNB, for example) to send back to a redeemer, custodian’s bonded collateral will be used to repay the redeemer. In this case, the public coins that redeemer receives – custodian’s collateral to be precise – may be different from the redeemer’s original public coin, but their total value is the same or greater than the value of redeemer’s original deposit. In your example, the redeemer can sell ETH or liquid ERC20 on any exchanges to get BTC back as desired.
The reference prices for the Portal is provided via an oracle, which collates price data from a number of external price feeds. In other words, Portal can obtain prices from it for the needed calculation.

For further information, please have a look at the following post to see how the Portal’s trustless custodians approach works.

Is this also still the case once I unshield it?

Unshielding means you are moving the crypto out of the Incognito network onto another one. Your transaction will be visible on the explorer of the other chain, although not link right back to your Incognito account.

For every pToken you receive a regular Token when unshielding.

thank you for the detailed description. Can you please explain this in a few lay-mans term sentences? Thanks!

also…
Why would someone want to shield their assets other than for nefarious reasons? and by that I’m not saying thats the only reason why someone would; I just cant think of other reasons.

First of all, if we don’t bring up a conversation of shielding feature particularly or privacy generally for nefarious reasons then I would not personally want to expose my wallet’s balances to the entire world (and many other normal people would not too I guess)

Beyond the use case above (along with making private transactions on Incognito chain), once somebody has shielded coins (pETH, pDAI, etc) they can use these coins on any existing Ethereum dapp out there anonymously through pEthereum. It could be the use case that people can invest and borrow crypto on Compound or trade on Kyber exchange (pKyber) anonymously. For instance of Compound, it’s very unlikely that people want to disclose how much they borrow and how much collaterals they provide., isn’t it?

And currently, from the core team, we’re working really hard to figure out the way to bring privacy to more and more actual useful use cases in order to “overcome” the biased thoughts that privacy is just used for nefarious purposes…

Privacy-preserving cryptocoins exists, e.g. Monero or zcash, and can be used for shielding and unshielding.
Can’t we just (1) trade BTC to zcash, (2) make the transactions in zcash, then (3) the receiver trade the received zcash back to BTC?
An automatic trading network like KyberSwap could be used for (1) and (2) to make life simple.

Awesome I really appreciate the follow up. Being relatively new (2016) to the crypto industry I’m finding myself asking more and more questions. Your explanation is clear and you have a great explanation with this use case scenario. Thanks again for your reply!

For instance of Compound, it’s very unlikely that people want to disclose how much they borrow and how much collaterals they provide., isn’t it?

A scenario most people can more easily relate to, when someone knows your bank account number, they can’t see what you spent your money on.

On the Incognito chain, crypto becomes like cash, after you withdraw money from an ATM, no one will be able to trace whether you spent it on pencils or candy. Unless they follow you around all day.

hi @ncn, I agree you can do it but in my opinion, there are 2 drawbacks with your approach:

This approach is especially helpful for creating interoperability with cryptonetworks that do not support smart contracts, like Bitcoin and Binance Chain.

First you said that these coins (BTC, BNB, etc.) do not offer smart contracts, then

To obtain privacy coins, the user first submits a shielding request to the Bond smart contract with information about which public coins they want to shield and the amount.

You may read this: Trustless Custodians: A Decentralized Approach to Cryptocurrency Custodianship

Thank you, just went through it.

hello if i send btc in a shield reception adress then covert the btc to xmr and send them to another incognito wallet and then another one and after that i transfere the xmr to binance account will the others be able to see that the btc was covert to xmr and then transfert in 3 different wallet and than binance?Or they can just see the xmr came from the last wallet ?

Welcome to Incognito. This has been asked more than a few times already. Incognito is not a mixer.

The short version is, if you change your coins around often enough, in a longer timespan, and don’t send out the same amount, it might work.

For the long version, use the search function with “mixer”