So I have a useless piece of hardware now?

Unless you restake, the obvious answer is yes. Sucks you can’t get the initial split again.

No, I don’t speak for incognito.

I also did not say that no growth would ever be desired, it’s just seemingly not desired at this point in the project.

Recently, there was too much growth, too quickly.

Good points in general but consider that decentralization and transparency would obviate the need for support in a lot of cases.

Also, when there is documentation it’s understandable that people think it’s up to date/accurate. I would also get annoyed if I read the docs, based my decisions on them, and later found out that I needed to have read all announcements and searched the forum threads to know how wrong my decisions were…

The app makes it seem like you still can do rented stake. What a joke. Will post video smashing my useless hardware to pieces. Once Andrey surprise announced on a community call that I randomly happened to be watching that slashing would be implemented shortly, I unstaked my PRV. The capital risk was not justifiable anymore. Team is extremely reckless and irresponsible when it comes to communicating with the community.

I’m confused. You had your node fully staked yourself? If so, you can restake it. If they were staking it, why did you unstake it? In either case, why would you destroy it if it works still?

Doesn’t he remind you of someone?

Lmao omg. Well I wouldn’t go that far. It still had cost money to get them that I wouldn’t destroy them. Anyways I brought up to support and founder that when mine unstaked today that it still had contact [email protected] for rented stake. Hoping they will make an exception. Personally I feel that since that was a possibility because we purchased the hardware from them, that it should stay that way. Understood if they stopped selling them, that cuts their liability. But the current owners should be able to carry on.

And dude don’t destroy it lol.

Okay, my issue with the whole Node orders being suspended is not so much that it was suspended for well it can be I guess started back up at some future date when the logistics permit. The issue that I have with the whole pnode, vnode, funded staking, and self staking is this…As we all know the pnodes were sold with the premise that they were funded by Incognito and well the purchaser of the pnode could upon taking possession of their pnode change the status from funded stake to self staked and well if they then decided to revert the process once more they could go from the self staked status to Incog funded stake by simply reaching out to the powers that be at Incognito…Now that was the policy at one time and the policy was suddenly changed to that once you unstaked a pNode from Incog funded staking status to a self staked funding status you could no longer reverse the process back to Incog funded stake status as you could at one time. Now ironically take note that this change in policy took place shortly after the firing of the growth team and even more specifically the letting go of @Peter…those of you who have been around for a minute know that Peter handled a lot of the pNode matters, which I believe included following up with sales of the pNodes and doing transfers of key assignments to pNodes that had been sold in private transactions between parties…something that as well is no longer supported by Incognito…It seems to me that Peter basically handled a big part of the project, meaning the logistics behind the pNodes, basically, he was the point person when it came to the pNodes, and well with his sudden departure that seems to have all fallen apart. So here we are with some members having unstaked their pNode and now wishing to have Incog restake them for they cannot at this time self stake their pNodes for whatever reason they individually might have and well the current policy being what it is it will not be done. So basically as one member put it…unless they self stake their pNode the pNode basically will be an overpriced paperweight.

Now as stated some of the members for whatever reason do not have the 1750 in PRV that is required to self stake. There arises for me the second issue. The amount required to self stake a node…period…whether pNode or vNode…1750 PRV at let’s say $2.50USD per PRV would cost the owner of the node $4,375 USD to stake a node whether it be pNode or vNode. Now I do not know about the rest of you but that is a pretty penny to come up with, to begin with, aside from then having to tie up said funds in said pNode or vNode. Now when this project first began I believe their was no self staking as to the pNodes at first…but subsequently there was a change in policy and self staking was permitted as this post by Peter in March of last year clearly states and I quote:

Now if we go back and take a look at the price of PRV at that time…it was in the ballpark of about 0.55 cents per PRV…so 1750PRV at said price comes to a total of $962.50USD. Today’s price is wayyyy more than what it cost in March of last year to well basically put up the required 1750 in PRV that is needed to self stake a pNode or a vNode. Anyone having had the good fortune of having been around in those early days of the project and self staking pNodes or vNodes at that time has made out like a bandit. The question to ask then is the funding amount based on a dollar figure or a prv figure. How was the initial amount of PRV required to self stake determined, and does that amount in any way take into account the price of PRV at that time? Does the subsequent price change in PRV since then have had a possible effect on the required amount of PRV needed to self stake and if not, why not?

So having added my two cents to this string I would appreciate input or a response from the powers that be at Incognito and well anyone else’s opinion for that matter. In the meantime stay frosty and go Incog!!!..

Hey guys, it’s a pretty busy week because of 3 big releases in a row. I’m going to make a post for things related to node issues support and new pNode policy. Hope that it may help clear up the confusion. 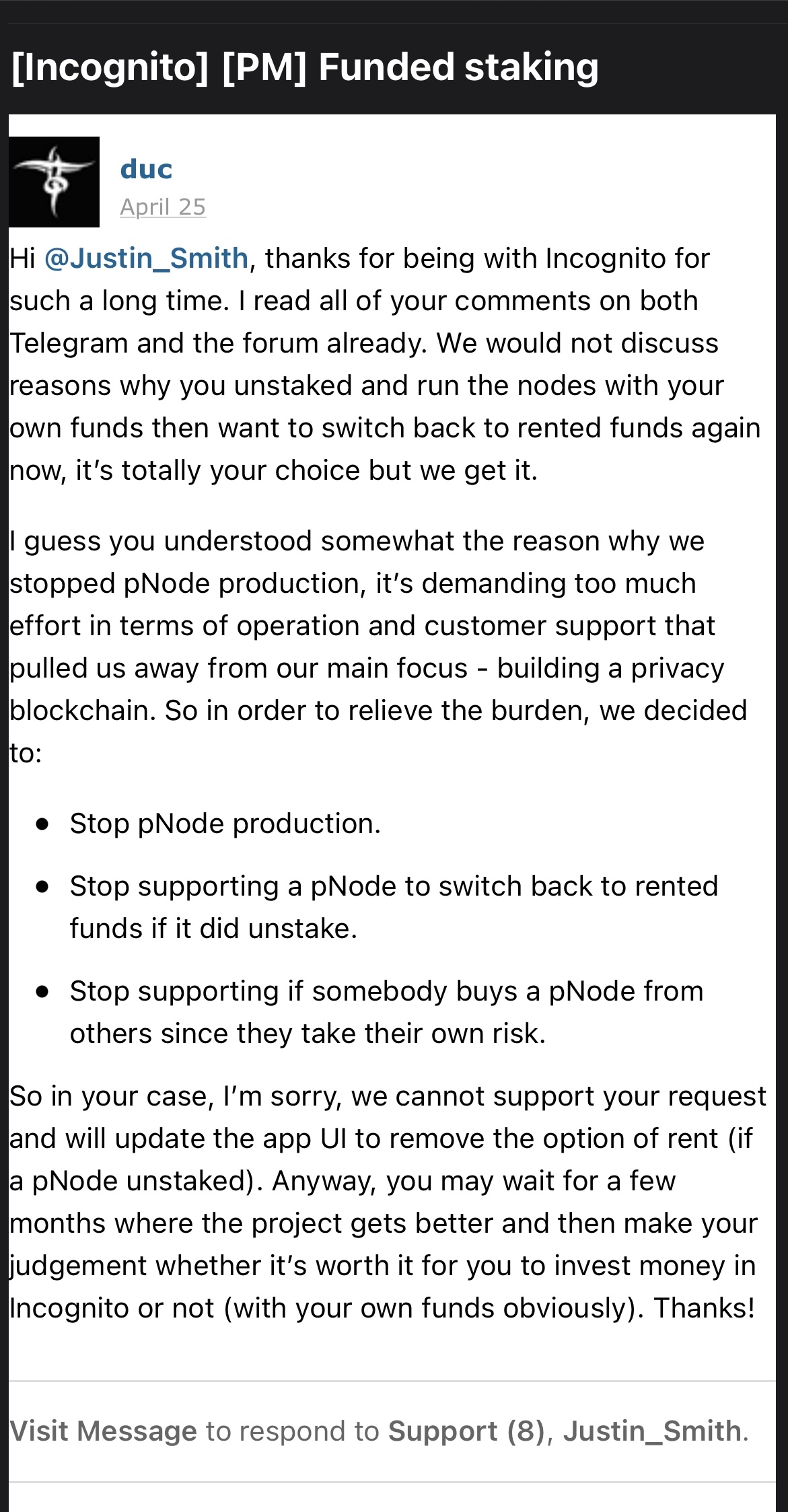 I staked myself to get the 100% of the rewards and the capital risk was low, no slashing at that time. I unstaked because PRV went up considerably, slashing is coming, and team communication is questionable. The node does not work anymore because I cannot do rented community staking. It is worthless now.

The node is useless now. Unless I can restake to rented community funds, I will destroy it.

I’m angry too. I wonder if there’s some sort of Vietnam business bureau for abusive marketing complaints.

Ive reviewed all of the founders linked in accounts and they are mostly based in Ho Chi Minh city. I’m thinking about taking locality legal action. Selling a product a certain way and changing its main functionality down the line causing inoperability unless you put your money in their company indefinitely isn’t right.

I have a question on this. I own an original pNode which is currently running pre-funded. Considering selling this pNode to somebody else how would you remove the node’s link to your wallet to allow the new owner to use his own wallet for the rewards without unstaking it? But if you do unstake the new owner only would have the option to stake it using his own funds, right? So basically reselling the device got a lot more complicated, if not impossible, by this policy change, correct?

but how would it technically work? I would sell the node and send the keys alongside the node so the new owner can access the wallet? but so could I and steal his funds at any point in time?!