ICYMI - Last night, over 40 people attended the monthly PRV Holders call. In the call, @Andrey and I were joined by various other core team members to give an update on April and on our upcoming plans for May. We also had a Q&A session in which many of you asked some fantastic questions!

The full recording can be watched here, and a summary of the main points, as well as extended answers to the questions asked, is below.

The call was accompanied by a slideshow. The relevant slides are attached as images in each section.

We had two main categories of improvement goals for April, project growth and building a stronger platform. Much was done to both ends.

Incognito operates on trial-and-error, experiments of every kind. Some work instantly, some are more controversial

But that process of iterating continuously and the community participating so wholeheartedly, made April a month of many successes, thanks in large part to you. Here are a few of the biggest advances in growth from the last month: 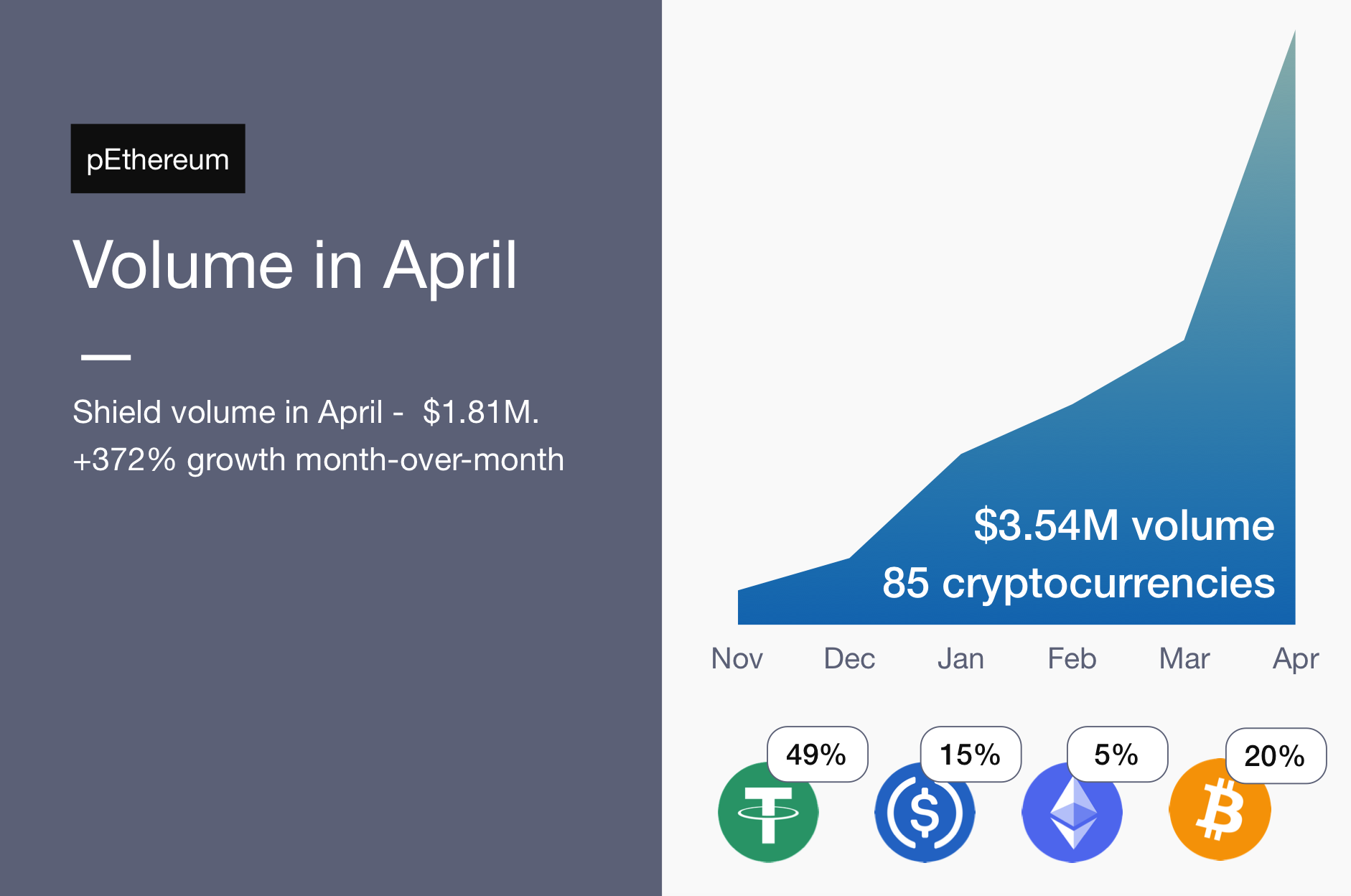 Shield volume is up 372% MoM. That exceeds our goals by 315%! In total, 85 different cryptocurrencies were shielded, the majority in stablecoins USDT and USDT, as well as the most popular coins in the world, bitcoin and ether. 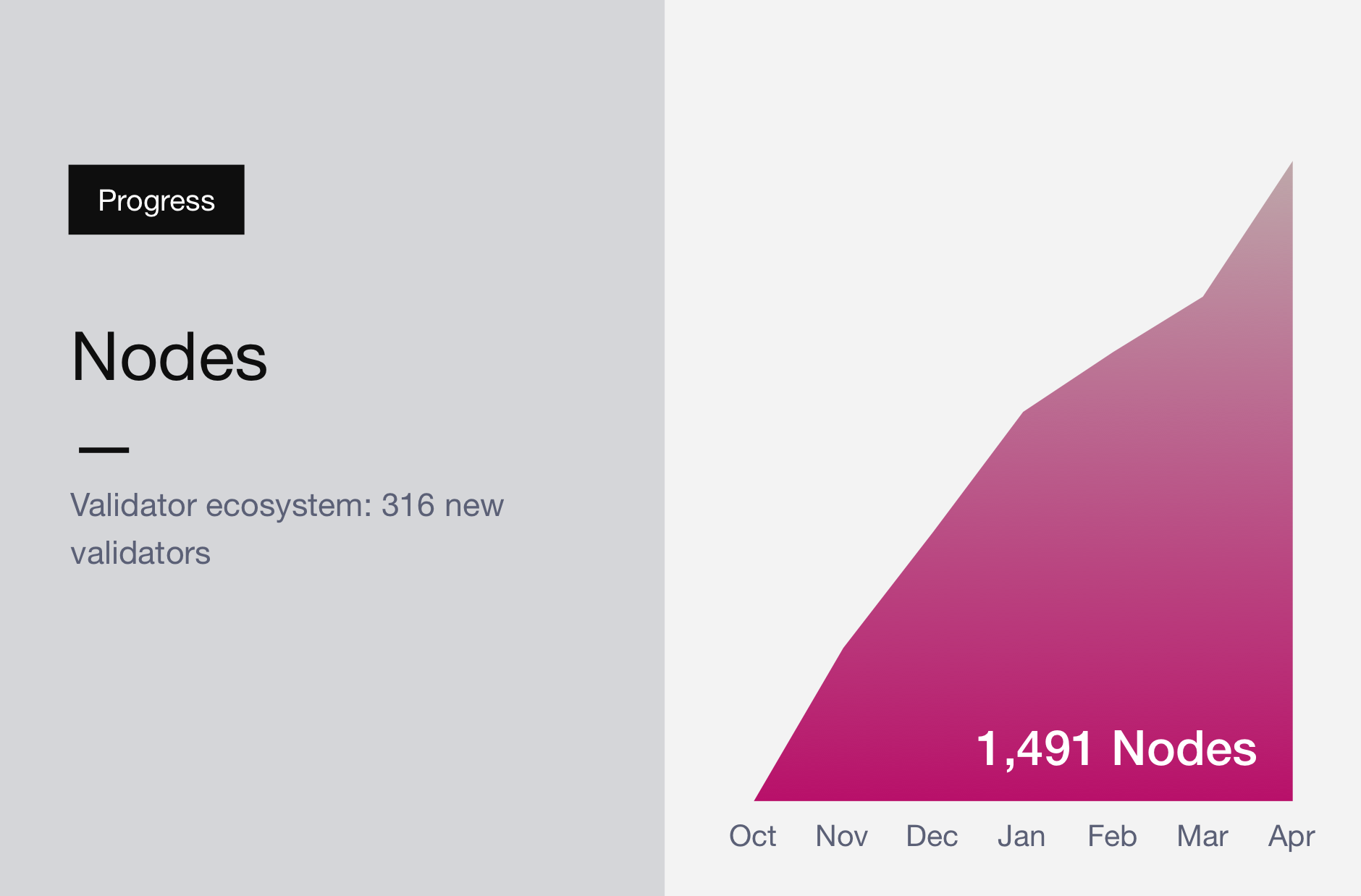 316 new validators joined the Incognito Network, +144% growth compared to March. This exceeded our goal of adding 300 in April. In fact, as of today, there are more than 1500 Nodes in total. 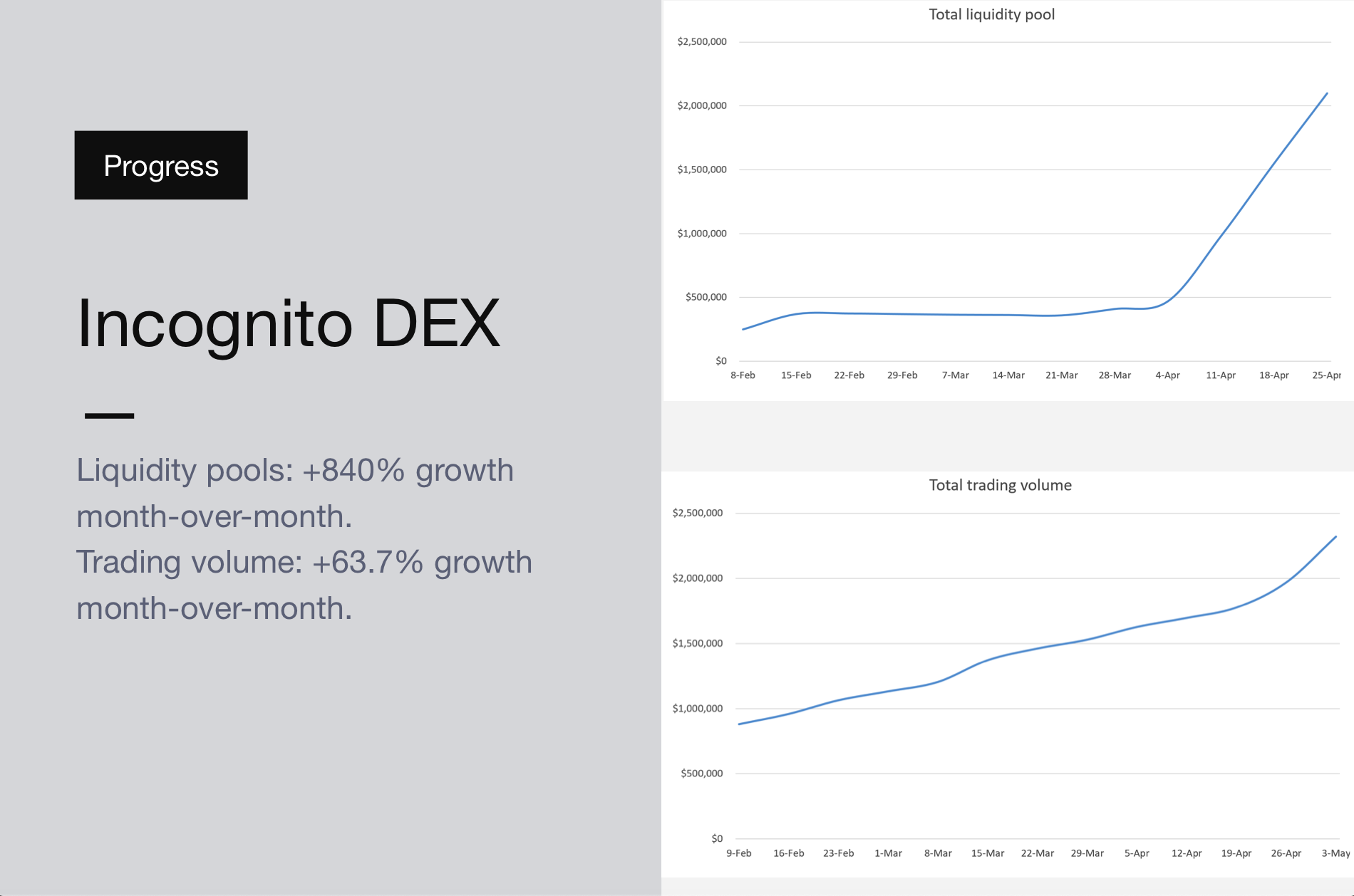 In April we set up a target around increasing liquidity pools on the DEX. We designed and launched the incentives program for liquidity providers which subsidizes providers to keep liquidity on the DEX. We planned to grow 30% month over month. Fortunately the program got a lot of attention from the Incognito community and new users.

As for building a stronger platform, here’s what Incognito devs and users accomplished in April: 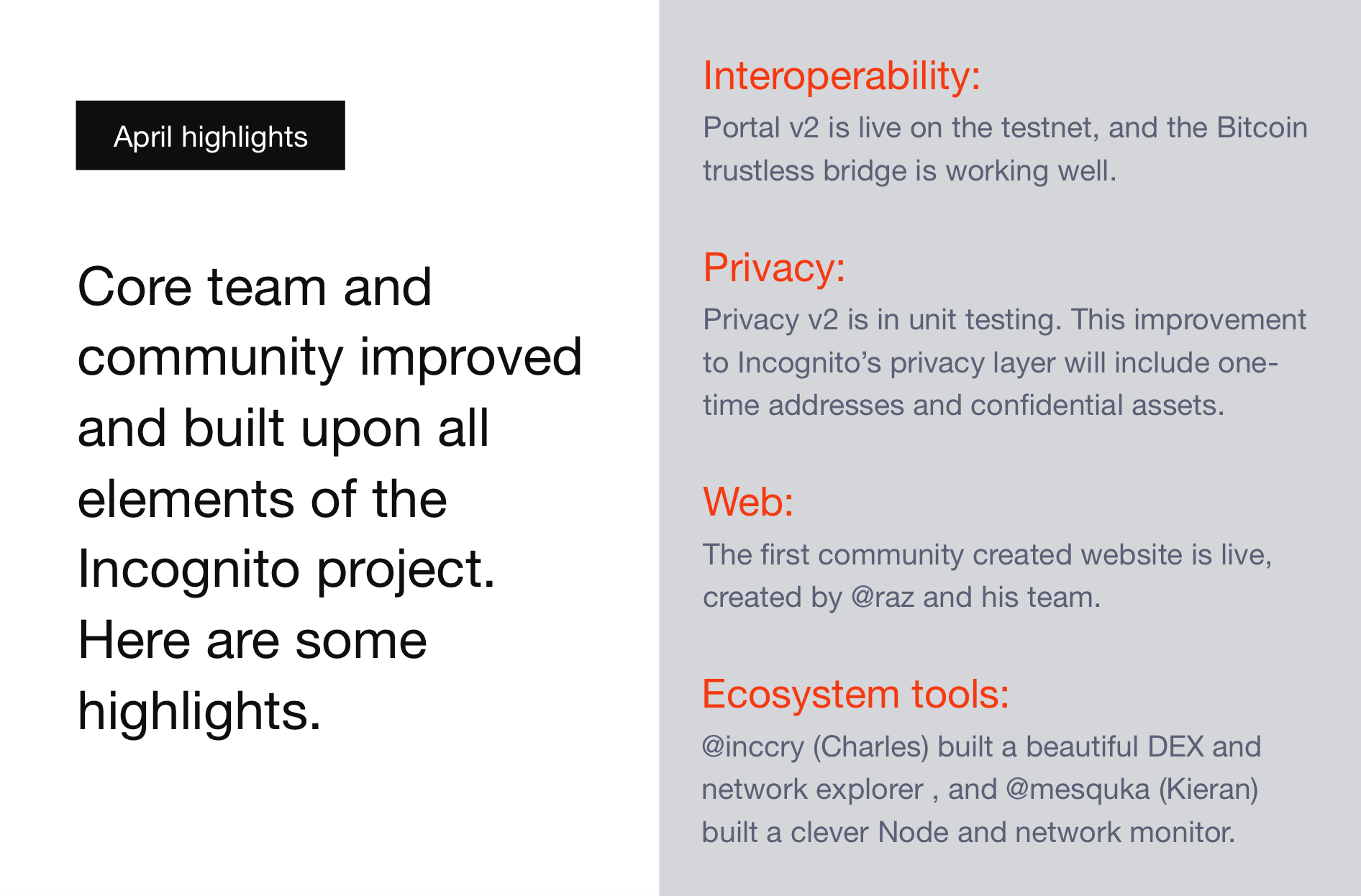 Portal version 2 is live on the testnet. It is a new trustless way to shield cryptocurrency by using decentralized custodians implemented in a similar way to MakerDAO.
This solution will allow us to launch trustless connections with different blockchain protocols. Especially ones which do not support smart contracts.

The first protocols which will be integrated with Portal are Bitcoin and Binance.

Privacy version 2 was also created and is in testing. At the chain level, we implemented one-time addresses and confidential assets to increase the level of privacy you get with Incognito.

You may have noticed that until now, you’ve been able to see what types of assets are transferred by using the network explorer. With the one-time addresses and confidential assets functions, privacy is extended to coin type, so people can no longer see what coins are being sent/received. 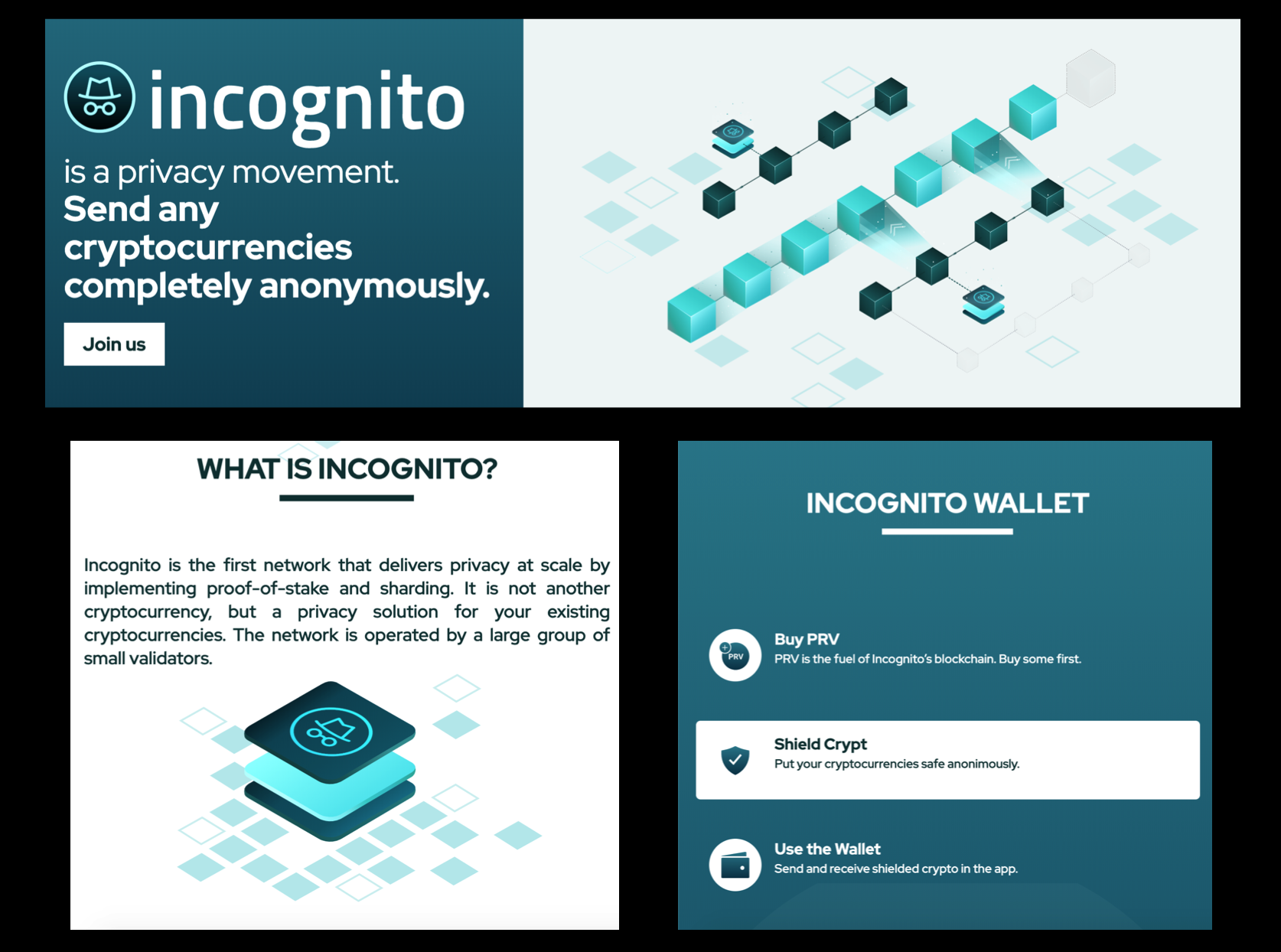 @raz has been highly involved in developing the Incognito ecosystem from the moment he joined the community. His latest project, a website that explains Incognito in a simple, attractive way to newcomers, is nearing completion. You can find his latest update here. 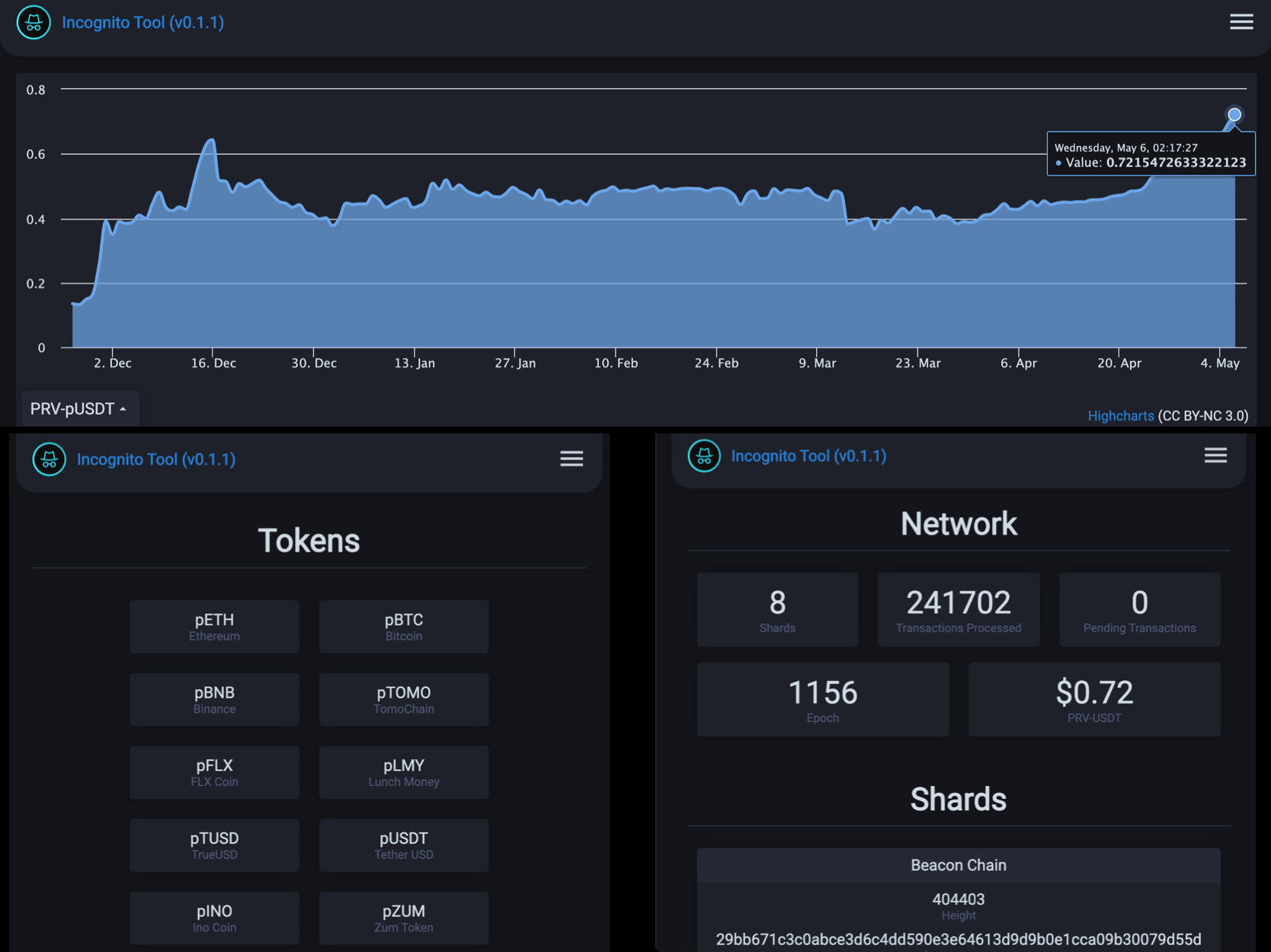 @mesquka has gone far out of his way to repeatedly advance Incognito. One of the things he’s done is create a tool anyone can use that gathers node activity in one place. It also includes price charts and other chain-related data. Explore it at https://incognito.mesquka.com/ 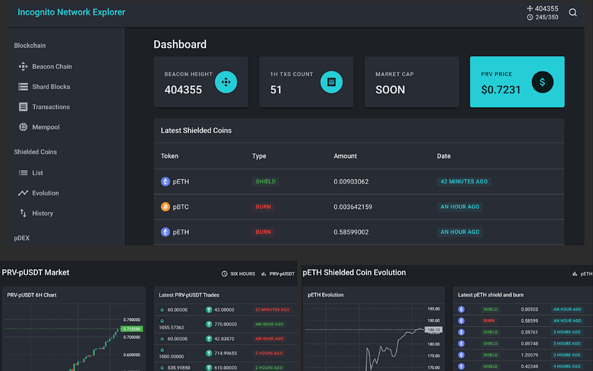 If you feel like donating to any of those hard-working creators, I’m sure it would be much appreciated. You can also contribute by sharing your feedback, or by creating your own proposal and making something amazing!

Alright, so that’s the gist of what got done in April, though there was much more. If you want more on April results, see the PRV Holders Letter.

Now, let’s talk about what’s coming up in May. 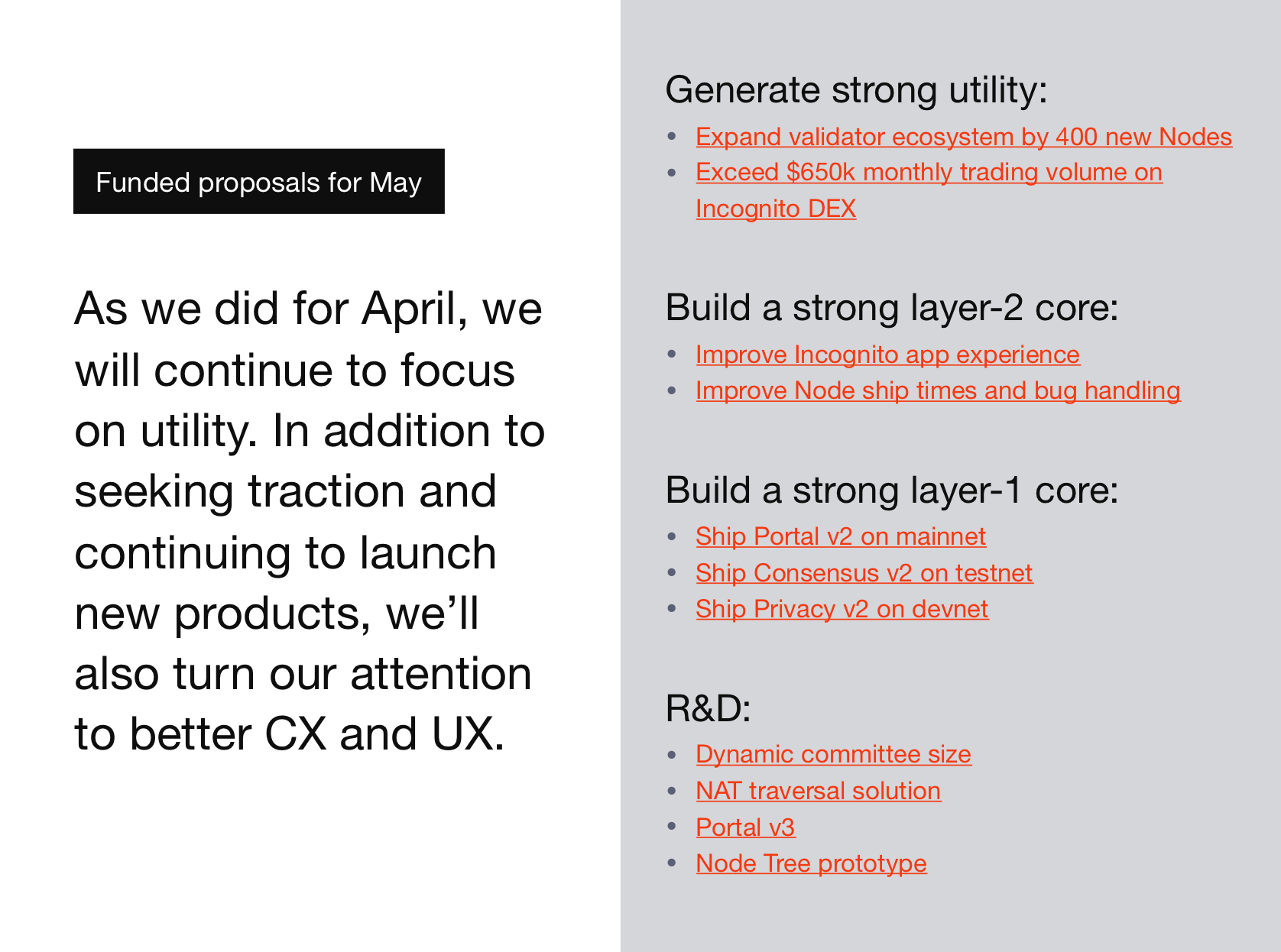 During the call, we talked about funded proposals. Voting on new proposals happens weekly, so if you have a goal for May and want to get funded to build something, create your own proposal!

For May, the core team’s primary goals are divided into power and use.

Network use has many facets. The primary one we are focusing on is the DEX. The Incognito DEX is the first decentralized, confidential, permissionless exchange. To be first requires a lot of experimentation on the path to find a product-market fit. Among the experiments we’re trying this month are:

We plan to increase the usage of Incognito to add more utility to PRV. The main focus is on listing more crypto Projects on the DEX. So if you guys know any projects that are looking for listing, feel free to recommend incognito to them. It’s free, permissionless, private, and decentralized.

Note: Trading fees are not transaction fees, so validator earnings are unaffected. Liquidity providers will still earn trading fees, as they can setup liquidity pools with fees. Zero trading fees as a default setting has already led to an increase in trades. In addition, this change is not necessarily final. It is one of many experiments taking place.

Note #2: With regard to pKyber, to clarify, we are not taking a competitive stance with them. It’s a symbiotic relationship in which they give us liquidity, and we give them privacy.

As we focus on building out a strong platform, we’re constantly changing. We’ll have some rather big updates to the app UI, we’re doubling down on the DEX, and there are more changes that you’ll continue to see. So be ready for the experiments, and let us know your thoughts.

Last month we received a lot of feedback on how to improve the pNode experience. In May, our team is going to work on:

The developments for layer one will be tested or released this month. The following are links to various proposals you may want to review.

Below this is the Q&A (It’s long, so you’ll need to click to expand it). But before we get to that, there’s one more recent change that took place and we’ll be experimenting with this month. 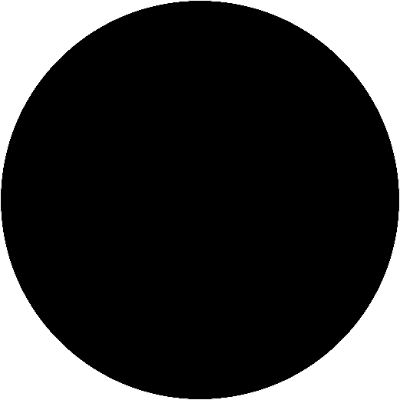 You’ve probably noticed we changed our logo! No, it’s not a joke

We’ve nicknamed it the black hole. It references the fact that Incognito helps you disappear, without a trace. It accomplishes a few things, but aside from being badass, it also helps to continue shifting Incongito from being a brand to being a community. I know it’s unorthodox, even counterintuitive from a traditional branding perspective. But remember: Incognito is not a traditional brand.

We’re not a profit-driven machine, and it’s not about a company. The privacy tool, and you, are the most important parts. If it ever became clear that a move like this would damage growth, it would be changed. But the rules aren’t one-size-fits-all. If the past is any example, you need look no further than February, when we changed from a beautifully-designed website to the clunkier discourse format, and saw 1,000% growth as a result.

Change is always hard, especially when it’s so unusual, but let’s see where it takes us. As always, be sure to share your thoughts! There’s a great discussion here.

For the Incognito merch discussion, that’s still all good. The old logo can be worn as “OG/legacy incognito”, or you guys can take the challenge to find cool ways to use the black hole to design merch. Up to you! There’s a proposal on getting Incognito merch out by @Joe_Moffett, you can check it out here

Finally, for the question and answer session! Due to how long this part of the post is, please click to expand if you want to read the Q&A:

Phew, that was a lot of reading

Thanks! If you have any more questions, comments, concerns, thoughts, or anything I haven’t listed that you want to share, please do! Reply below, and let me know your thoughts.

What if we call it an “eclipse” instead?

Putting money into a black hole sounds ridiculous. Eclipse has a nice charm and an allegory as Incognito hide Bitcoin, the center of our new world economy.

I’m down for that idea!

A solid black hole is a terrible design.
There has to be a more sleek, interesting design with the same thought behind it. A black hole/dot is the most uninspired logo I have ever seen and it is a joke.

Not trying to be mean, but there could literally be any other design, such as at least some light radiating out from the sides giving it some depth and calling it Eclipse like the other guy said?