Quest is Incognito’s first pApp, and happily, it has received a great deal of attention. As it’s a game of skill and luck, we thought it’d be helpful to share some details pertaining to how Quest defines ‘luck’.

Briefly, there are 2 rounds to Quest. The 1st round invites players to seek out hidden QR codes in order to unlock the token QUEST, which allows them to spin a lucky wheel and win prizes. One of those prizes is a Bitcoin LOTTO token, which gives the holder access to the 2nd round – a draw to win 1 BTC.

Here’s how winners are selected, how likely they are to be selected, and how it all works.

A verifiable random function (VRF) is used to generate a pseudo-random value on the server-side from the input of users. Based on the property of VRF, a non-interactive verifiable proof is also provided to verify the correctness of the computation. The VRF consists of the following algorithms:

To guarantee the uniqueness and unpredictability of player_input, we require players to spend QUEST to the server address each time they spin the lucky wheel. The transaction ID is player_input.

We will make public the source code and provide a verification feature that allows players to check correctness.

We implement the VRF algorithms described in this paper.

After generating the pseudo-random value rand as the lottery ticket, the next task is to determine the winning prize.

Due to the uniform distribution property of pseudo-random value rand, we define prize ranges based on the total numbers of distributed QUEST tokens and the total prizes. The following figure shows how the winning prize is determined after the ticket is received.

For this example, let’s assume that the total of 404,500 QUEST tokens distributed to players are spent on the wheel. The prize ranges are defined as follows:

The list of range prize Li is computed as follows:

Each rand value that is returned to the player each time they spin the wheel is mapped to one of the ranges above to definitively determine the prize.

The player must submit their payment address or public key in each transaction (memo) to receive the prize. 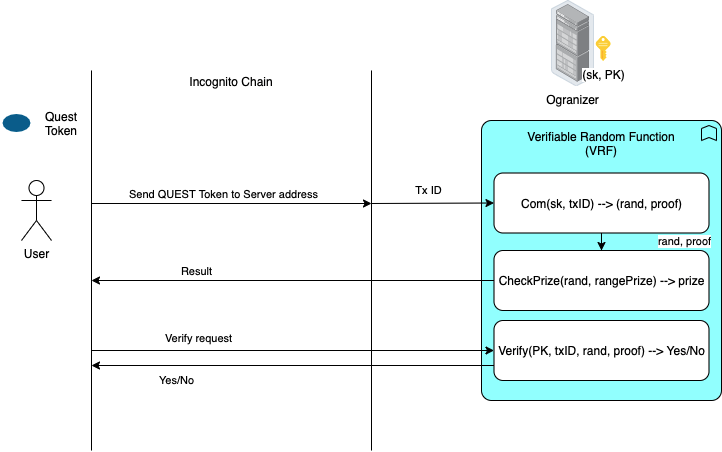 This is conducted similarly to the first round. The only difference is that the prize ranges are not used to determine the winner and the prize.

May the odds fall in your favor

How about the tokens are traded by members, so it will base on the last member’s key who holds the token right?

hi @Glky, actually we base on the transaction ID sent by who. In addition, to receive the prize, the app will automatically add the owner’s public key into the memo field. Then you will receive the prize

So it’s past 6PM PDT and I am sure that most eastern countries (and south east Asia) has entered the 27th of November. Is the wheel spin actually starting on the 26th? Or is this tied to one more quest still waiting to be completed (551/600 users claimed the QUEST tokens so far)?

Just post the last QR code here and let’s get this show on the road.

Other than showing the chance of drawing a prize relative to another, this hypothetical is meaningless.

Give those numbers and we can do the math, based on your hypothetical.

let’s assume that the total of 404,500 QUEST tokens distributed to players are spent on the wheel. The prize ranges are defined as follows:

What happens if for example 100 000 QUESTS are not used (A very real possibility because of the 0.08 PRV fee)?

Will the same number of prices be distributed, or will Incognito get to keep the prizes that would have been won by those unused QUESTS?

There is currently no expiry date for this game. It is part of an ongoing educational effort to highlight privacy problems and solutions.

People who don’t want their QUEST tokens can sell them or donate them.

Greetings from Kazan! I want to ask developers to make it possible to exchange QUEST tokens for PRV tokens in the wallet… I have, for example, many of them, but no others… everything has a price!

I’m quite sure there is a liquidity pool for quest tokens. You should be able to trade for PRV.

Yes @vafin you can trade QUEST <-> PRV (and LOTTO too!) by using the pDEX feature in the app under “Trade” on the main screen. If you are new to this feature here is some useful info on pDEX/Trade.

My two boys, who are avid gamers, have prompted a controversial conversation at home about the graphic representation of the spin wheel which does not visually represent the odds listed in the chart (above in this thread). They argued that the graphic representation of the spin wheel for people who aren’t in the forum here to see the odds chart is “deliberately misleading”. I pointed out that they can in the app scroll down below the wheel to see total number of spins and how many people have won so far to defend incognito’s efforts to be very transparent about it. But, they point out for many it requires too much effort to calculate the odds from that info below the spin wheel and the image of the wheel implies 1/12 chance for a spin win (which is their main point about deliberately misleading on the odds in the image of the wheel). They think the wheel can and should try to represent the high probability of not winning anything to align with the actual odds of the algorithm and prevent unrealistic expectations when someone looks at the wheel image without being in the forum. I pointed out to them that the point is to draw people into the forum to find out more about Incognito. I continue to defend to them the honest efforts at transparency both in the app and on the forum, but they (25 year olds) were bothered by that spin wheel image in the app and suggested instead a simple “lotto button” (that implies no odds graphically) or even a Magic 8 Ball type button (where no odds are implied in the image itself) or a slot machine spin window where win items fly by and stop on the one that wins. They are simply worried about people’s initial expectations when looking at that wheel which implies higher winning odds than the reality of the algorithm. We all understand that developers are building these tools incredibly fast (and because I had seen the odds chart above earlier, the wheel never bothered me), but the younger generations like them, may have similar responses to the spin wheel image. Something to think about for later iterations of Quest, perhaps.

Please guys, can we see this hunt as a game and move on? Let the devs focus on something that is more essential to the project than this gadget?

I feel the more transparent the team is the more the information is doubted and attacked.

I already know in case the parts of the wheel were to be adjusted to reflect the odds mentioned below it, someone is going to argue about how one part still seems slightly off.

If I were the team I might decide to take down the wheel altogether just to avoid these endless conversations on details that don’t really matter. The hunt was for fun, to play and enjoy, not to spend your life savings on just because your (in general) greedy mind didn’t read passed chances of winning 1 BTC.

Let’s focus on what is really important, providing privacy to crypto transactions.

Great points that your kids bring up @Northhill. It seems like for further iterations, an easy fix would be to change the graphic to something you describe. It’s good to get outside opinions sometimes to see what is overlooked when you are so familiar with things.

Having something like this will allow for less distraction with the game and more exposure to the main point (as @Jamie mentions) of Incognito and privacy.