Hello world, I’d like to begin the post with an example: there are 2 builders working on 2 different applications (say, pTrade and pLending) for Incognito, it’s likely that there would be some overlapped feature between these. The obvious one is wallet management, it’s very inconvenient when a user must create/import/manage the same wallet twice for these two applications. And it would be a real pain if a user must do it hundreds of times for hundreds of applications. Additionally, it’s not optimized in terms of development effort when builders must implement the same functionalities while they deserve to have more time to work on creative and interesting features. So these are big problems I think.

In my design, it’s intending to solve those two problems above, specifically for 2 types of audience: end-user and developer.

While end-users are enabled to share the same wallet across all integrated privacy applications (pApps) with pStore platform so that they don’t need to repeat the same actions for each pApp, developers are enabled to build their own pApp for Incognito as easy as possible.

In this post, I wanted to introduce the general architecture of pStore platform as well as pMultisig - the first pApp integrated with the platform. Hopefully, after the post, any developers should also be able to build pApps as desired without any difficulty, thanks to pEthereum’s flexibility.

Basically, there are 4 main components in the architecture: pStore, pApps, end-user, and Incognito chain as the following figure. 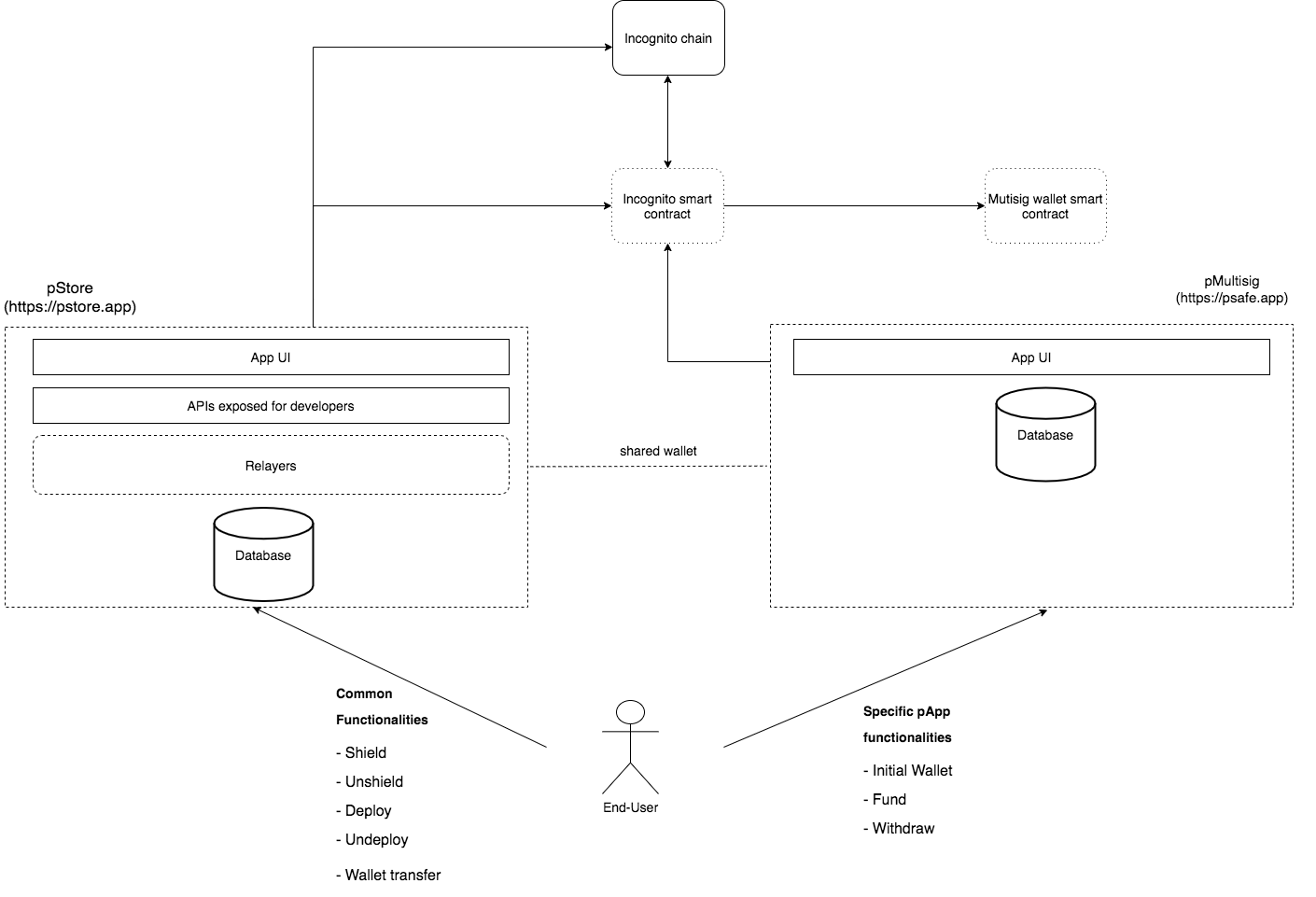 I’m going to explain the role of the first 3 components and ignore Incognito chain since it’s out of the post’s scope (actually, due to my knowledge limitation)

Each pApp has unique functionalities and these should be implemented by those who want to build their own pApp. Although these pApps are separate applications hosting on different domain against pStore, they can still reuse the wallet (along with its balances) created/imported from pStore so that their users don’t need to repeat the same procedures for each pApp.

In the figure above, pMultisig is a sample pApp with specific functionalities:

In order to build a pApp, developers need to work on 2 things:

It depends on the functionality you want to build to have different business logic and process, but there would usually be a typical flow as follows:

Reflect from the general flow above to the pMultisig’s withdrawal specifically, it should be:

By applying the same process, you would be able to implement any functionalities for your pApp that would integrate seamlessly with Incognito chain and pStore platform.

Don’t worry if there is something you don’t follow. In the next post, I’m going to walk you through step by step of how to build a pApp with pStore platform.

Are there API calls to use your platform?
Specifically interested in

Hey @Revolve, thanks for your interest, actions that you mentioned are mostly related to secret/private key. For security reasons, these should not be exposed as public APIs but should be operated directly at client-side (aka browser) so users don’t need to disclose their private key to any external parties. Fortunately, Incognito SDK is open-sourced and it did support everything we need such as wallet creation/importation, transaction creation at browser, balance calculation, etc… in order to preserve trustless philosophy that both Incognito and pStore platform are intending…

Additionally, one of pStore’s goals is to provide a platform where developers can build their own pApp in the easiest way so I prefer to expose APIs that make devs’ life easier. For example, signature data preparation which satisfies Incognito contract’s execute function as in Typical Process aforementioned in the post, I think such operation is not usually trivial for developers to figure out (to be honest, it took me 2 days or so)

By the way, APIs along with their documentation will be published soon, hopefully, you will like it.