In the previous topic, we’ve discussed the second major part of Incognito - the multichain (alongside privacy). In technical terms, it’s a capability of sending coins along with arbitrary messages from a blockchain to another but in the concrete real use-cases for end-users, it may be a universal swap function that will allow users to:

That sounds complicated, huh? No worries, from the end-user view, those will be merged into a dead-simple UI that depends on the swapping coins, it will fall into one of the above four cases.

Let’s check out the following UI of the web-based app to have better intuition.

To enter the privacy De-Fi world in the Incognito ecosystem, you need to deposit assets into Incognito chain first. 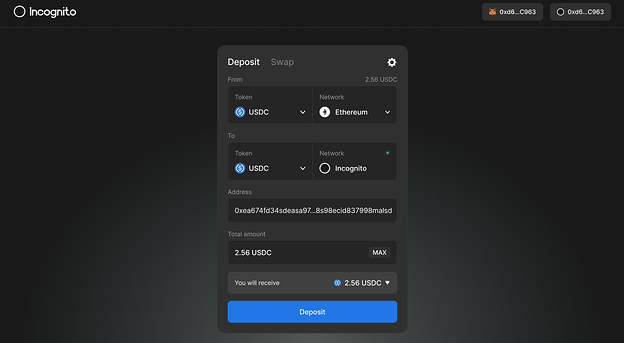 On the web, we will still support two options for the deposit function like what you have experienced on the mobile app:

As aforementioned, on the same swap view, it depends on which token(s) and network(s) you are selecting to determine which case of swap (along with liquidity pool) the swap falls into. 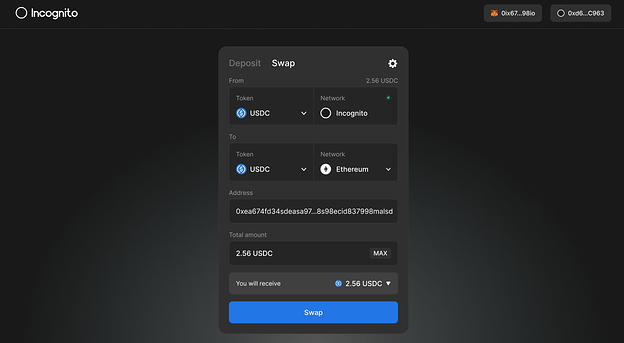 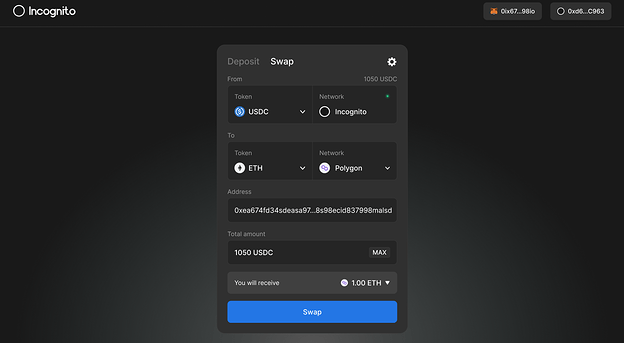 Please note that all these swaps are completely anonymous and the splits are for searching for the best rate of the initial swaps that also take fees into account.

In this topic, we just go through the universal swap - the first product that comes from the foundational components we’ve been developing for years now: privacy blockchain, bridges, Incognito AMM exchange and unified privacy token protocol. We do believe that despite of fragmentation of blockchains, their L2 and DEXs, the complicated things should be completely abstracted from user to user. What they need is an integrated place allowing them to swap tokens regardless of what happens behind the scene.

Also, with sending arbitrary messages capability, Incognito products should not be limited to swap (swap is the most popular usecase in DeFi now though) but will be able to extend to broader usercases such as universal lending or universal NFT marketplace, etc.

We do believe that despite of fragmentation of blockchains, their L2 and DEXs, the complicated things should be completely abstracted from user to user.

I also have a question. At least one side (from or to) of Swap feature always be Incognito, won’t it?

Yes, exactly…
We understand that’s a tradeoff for UX (and even trust since new users may be concerned if they have to deposit funds to a new platform). We like the idea you proposed earlier with a seamless experience from end to end.
But introducing a non-privacy flow/feature to a privacy-first platform like Incognito, is a big change, it breaks what we (and the community) have built for years

I have over 6 failed attempts at swap, first time is ever happened. I am trying to swap prv to xmr with no sucess.

We have detected an issue with the Transaction Relaying Service and the devs are looking into this issue. This impacts transactions preventing them from possibly going through. We will keep you updated both here and in the app once things are back to normal.

I also notice there is no update change in all crypto coins. Ive seen prv remain at .3466 since yesterday

It is normal since

I need a reply when all the bugs are fix. I’ve never seen this kind of problems with your program

Anyway I can fix it in my end?

Attention App Users: The devs have fixed the issue with the Transaction Relaying Service that affected trades and shields/unshields in the app. The backend is resyncing the data and once complete will process pending TXs automatically.