Based on personal experience, I recommend sticking with vNodes, which, for me, have far outperformed my pNode.

Since I bought it in early April, my pNode has earned only once. Despite this inactivity, the pNode looks operational to me, to @Raz’s cool diagnostic tool, and to Incognito support as well. Yet it does not earn. I spent $399 on something that, in more than one month, has paid me back no more than $24. By contrast, a vnode I spun up last Monday has earned nearly $55 in two weeks. I think my vNode easily will help me recoup the cost of the underperforming pNode.

Now, the marketing says that, over the long term, all nodes should earn roughly the same. If you were to buy a physical node, perhaps this earning potential would bear true for your individual device; however, with my particular pNode, I have to question that assurance, and I have to warn others.

Nevertheless, I am looking forward to the new pNode tree–in part because of the space-saving stackable design, but also because I believe they have addressed some of the deficiencies of the original Node. If you are interested in the physical hardware of Incognito, I suggest waiting for next gen.

Incognito teases new multi-node “Tree” design, and it’s way cooler than you’d imagined [image] March 16th, 2020 - The new multi-node set from Incognito has been in the works now for about three months, and we’re already seeing huge developments. With the original pNode killing it out there, it’s no wonder you’d want more than one. It’s easy to use (just plug it in, link it to your Incognito Wallet, and start earning crypto), sleek, and energy-efficient. You can grab one here if you haven’t alr…

Thanks for the input, everyone!

I have to as well.

I appreciate you sharing your experience, but to clarify there’s nothing by which the network would distinguish between a node and node virtual and choose one over the other. This is verifiable in the github.

The fact that your pnode has only earned once is completely by chance, and could just as well have happened to the node virtual. I’m interested to see when it starts earning again though. How long has it been?

That would be a new record, old one was 23 days.

I’ve been struggling to get my pNode to run for some time now.

Just to clarify regarding my pNode (which is setup with manual/ethernet cable)… Even if my node looks like this on the app, it’s still connected to the network?:

If I re-plug it shows up like this for 10-15 minutes, before returning to “Fix it”-state on the app:

Also in my router under a static mapping it shows offline:

But until you earn the first time you should reach out and verify with support that your node is good to go, but I believe with 99.9% certainty that you are good to go.

Can confirm, woke up to this.

Did you try pressing Fix It button? It may help.

That’s what I’m talking about!
So you may be aware, but some aren’t so don’t take offense if you already know this.
But, the pnodes earn 35% of what they can potentially earn, to earn 100% you have to fully stake your node at 1750 PRV.
(I have no intent of doing this anytime soon, I like adding to stake/liquidity at the moment). Each time you earn PRV I think it should be around 11.9 PRV.
When you try to withdraw, understand right now it is a manual withdrawal done Monday-Friday, so don’t worry if you do it on the weekend the ticker hasn’t started. It’s actually really quick throughout the week, and they are working on automating the process while still being secure about it.
When it hits your wallet if you want to immediately start having it work for you, go to STAKE, then tap STAKE MORE, and you can access multiple areas one of them is your wallet associated with your node. Tap that one, tap MAX withdrawal, then MAX again to subtract the fee and you’ll have the maximum staked in minutes compounding every second.
If this doesn’t make sense now just refer back after your withdrawal goes through.
There is no penalty if you start withdrawal before 11.9PRV is hit either since it will take longer than your node is earning (4hrs).
Lastly, you’ll see a bunch of minuscule crypto “dust”, that will grow larger over time as more community slots are opened up, more volume is being traded, etc. Hope that helps! 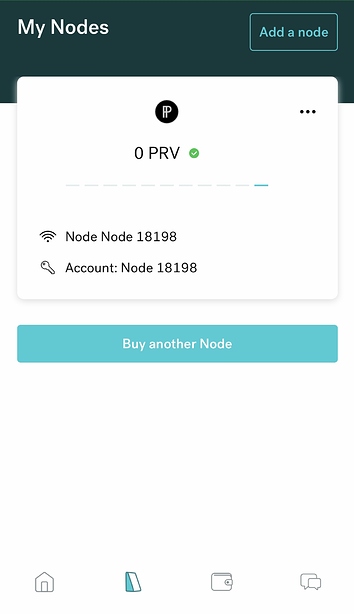 You got a lot of dashes there, earning a lot of carp to dust too?

Well I’ve only ever had PRV paid out. Not sure when the others pay out.

Not sure when the others pay out.

the other coins are only withdrawn when their total reaches 25 nano pToken value. This is due to the fee that is involved with the withdrawal transaction.

On that screen flick to the left, each of those dashes are some crypto dust

@gold, this dubious honor now belongs to you! i hope it brings you some small comfort in these dark times.

@jamie, thank you for being such graceful holder.

Thank you, @ning! My node finally earned and unstaked this morning. So the new record is 29 days.

what you’re saying is the Longest Non-earning Streak badge is gold?