I have @Peter trying to help me, but I would like to have this resolved quickly so I’m reaching out to you

So I’ve had the pNode for some time now, I’ve managed to setup it up manually with an ethernet cable, according to the documentation delivered from incognito. Wifi setup has been attempted but apparently my phone won’t share wifi password with the node. So I went with the manual setup.

So my problem right now is that whenever I plug my node on it connects to the incognito network for just a couple of minutes before returning to a not responding state. Sounding a lot like this problem pNode disconnect, I’m just not sure if the proposed solution would fit me. So my screen seen on the app when it’s disconnected:

If I re-plug the node it comes online and connects to the incognito network for around 2-5 minutes and everything checks out, I’ve even had it confirmed by @Peter

But everytime it returns to this screen on the app after 5 minutes:

Every other device on my network works fine and doesn’t lose connectivity.

Things to consider are:

Hi @br4ave, please have your node plugged again with a hard-wired connection. We will look into it.

I was told that port 9334 should be open for the node. Which IP protocol does it use?

9334 is for the vNode. pNode is the plug & play device, so do not make any adjustments/ modifications. 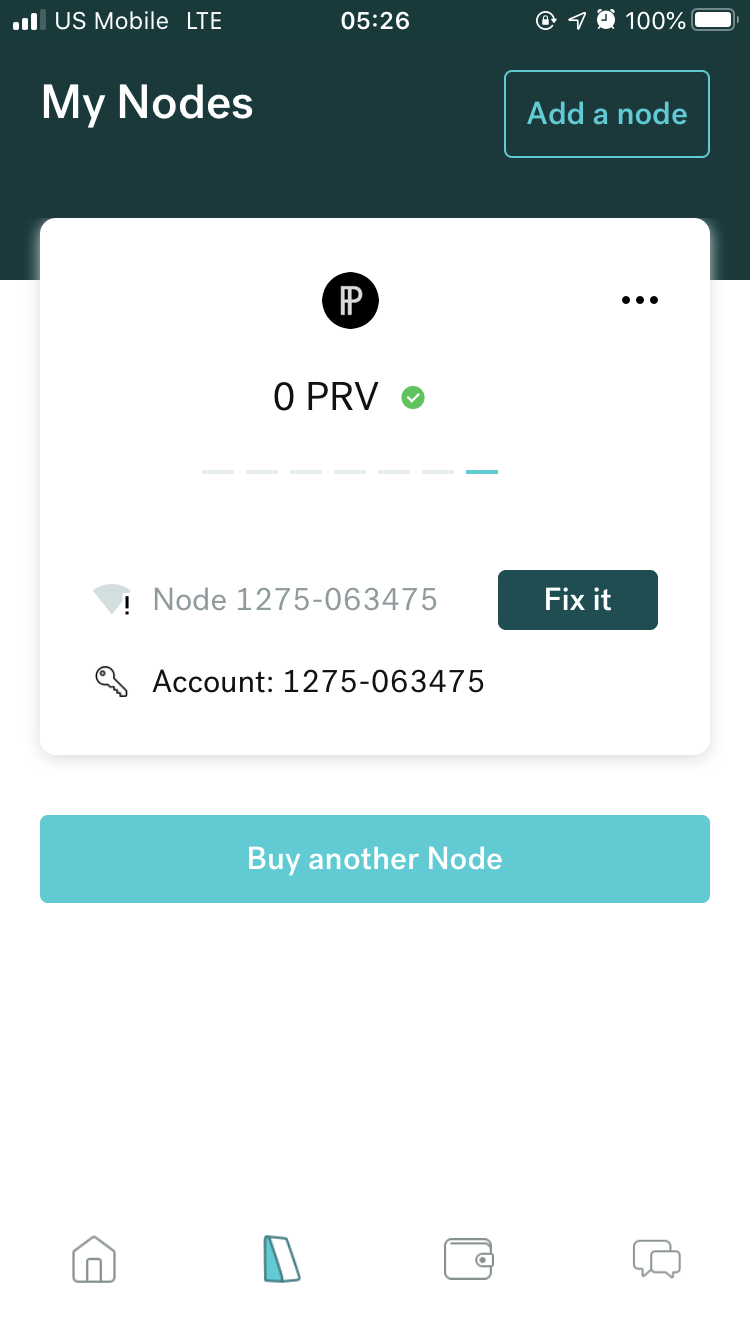 I haven’t had these issues yet, and I will not be home for another two weeks. My wife did tell me that the node is plugged in, wifi is fine and the blue light is on. So…it should be fine?..

Right what is my next move?

I feel a bit overlooked. I’m actively engaging in finding a solution but it seems like my issue is getting no attention.

If I don’t get this node up and running I will send it back to you. It’s only been a cost for me eating electricity.

Hi @br4ave, your issue is a native problem from the Ubuntu OS. Some others may get this, also.
For the time being, please re-plug the Node when you see that message. It might cause a little bit inconvenience, but that is the only to have the node synced fully with the Chain.
We will make some improvements to the firmware to fix this issue. ETA is not yet defined.
Finally, I confirm that your Node is up and running. You also got 23.43 PRV in rewards.
If you want to send it back, send me your order number, I will send you a return label to get it back.

Thank for your reply.

I’m glad you found the cause of the problem.

I just need to understand a few things, which OS are you reffering to, my PC? my router? the nodes own OS?

Yes I see that I got some rewards, but as I understand it’s because on re-plug it connects to the network, but afterwards it will stay passive and never connect again, until I re-plug. Have I understood correctly?

As long as there is a fix coming I will hang on to the node. Thank you.

I am referring to the Node’s OS.

The rewards you have, doesn’t relate to “plug - replug” cycle:
1/ Replug makes your Node to “wake up” and start syncing with the chain
2/ Rewards are paid because your Node (the validator key) joined the committee. If there are enough valid signaturse in that committee at that time, the whole committee (include your Node) will receive the rewards.

In short, have it always plugged, and wait for your rewards are my suggestions.

Thank you for the update

@Peter , I’m having the exact same connectivity problem. Turned my first pNode on about a week ago and it still won’t keep connection more than a few minutes between restarts. I’ve tried wired and wireless connection and it acts the same. I have a 2nd pNode due to be delivered on some time this month, is this a problem with random nodes? or in this situation should i cancel the outstanding order and send this one back and wait for a fix?

@VINWOSNI I would keep the nodes, seems like they are aware of the problem. Atm I’m on a 1 hour streak with the node showing online.

Also as I understand as long as you are connected at some point you join the committee. And rewards will be give to you even if it’s showing offline. simply re-plug to sync your node. I hope they will fix this issue in the Node OS so we can just let the node run.

@br4ave
thank you for your feedback, i’m thinking my node has more issues and may only be sharing the connection problem. I really don’t want to send them back, but there are better places to put our money if this isn’t working, I’m sure they would understand that.
Hopefully Peter can look deeper into it for me.
thanks again!

@br4ave explained well what I am going to tell you @VINWOSNI
What are the issues that you think your Node is having more?

Also, if you could give me your Node ID in a private message, it would be great.