A strict limit of 100M Privacy (PRV) will be minted. This number will never increase.

The Core Development Team pooled together a collective $1M to fund the project. No ICO, private sale or VC funding. Potential users and investors should not be asked to pay prior to any code being written. As such, the founding team bears all risks.

The $1M was funded in May 2018 and primarily used for protocol development and user adoption.

This funding structure will reduce price speculation around the project, avoid public market pressure, and keep the team laser-focused on building and shipping a great platform for decentralized privacy tokens.

Proof-of-Stake networks often heavily pre-allocate tokens for the team, investors, and ICO. Incognito takes a different approach. Incognito is a Proof-of-Stake blockchain that designs its block rewards similarly to Proof-of-Work blockchains like Bitcoin.

95M of the 100M PRV total supply is mined through block rewards. The total block reward for the first year is 8,751,970 PRV. Block rewards are reduced by 9% for every subsequent year. PRV will be fully mined after 40 years. 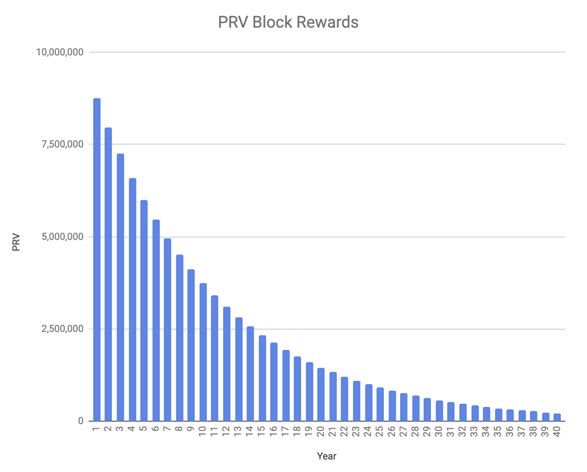 5M PRV is pre-mined and purchased by the Core Development Team for the aforementioned $1M, and has been used to cover salaries, server costs, operational expenses, and marketing activities.

There is a chicken-and-egg problem with any Proof-of-Stake blockchain. How can validators start staking when they don’t have coins to stake?

Incognito solves this in 2 ways:

95% of PRV total supply is minted through block rewards. Block rewards are split between the validators and Incognito DAO, a decentralized autonomous organization designed to fund protocol development and network growth. Incognito DAO collects a gradually reducing percentage of the block rewards, from 10% to 3%.

With this income, Incognito DAO will fuel the growth of the network, fund interesting projects, and give the project longevity.

Incognito DAO’s funds are initially managed by the Core Development Team. Management responsibilities will be gradually distributed to the community.

There are 3 types of tokens:

How will the nodes earn after 40 years?

I’ll help to calculate to record this moment for history:)

If you are interested to dive in the network fee-related discussion, jump here and here.

Are we still waiting for year 1? For the past couple of years, the Incognito team has collected at a minimum of 67% of all block rewards. According to the original plan and block reward halving, we’re now on year 3, where the DAO should only collect 8%. Yet, the most recent plan for 2022 is talking about getting it down to 34%?

Doing some rough calculations, the Incognito team over the first two years collected a total of 5M + (8.7M + 7.9M) * 2/3 = 16M PRV. Out of transparency and for the sake of community trust, is there a public ledger where we can see exactly how much is still held and what the rest has been used for?