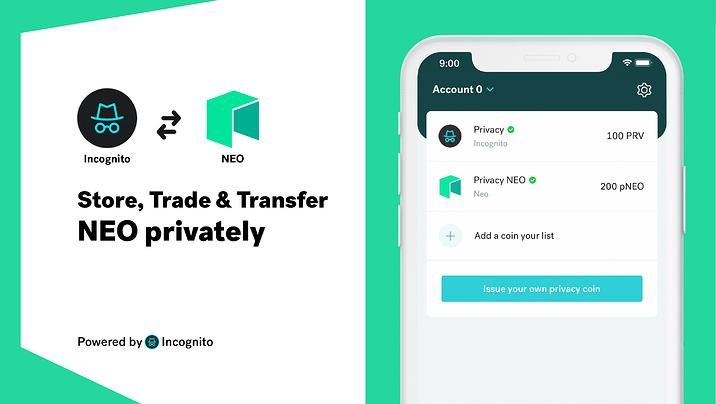 Neo, the self-described “open economy, community-driven blockchain platform”, aims to make blockchain technology useful across the board, from everyday home use to government systems. With their smart contracts and unique voting and consensus mechanisms, Neo takes advantage of every angle possible to create blockchain products that anyone can handle.

Now, thanks to a new achievement in the collaboration between Neo and Incognito, their platform isn’t just useful, it’s also private.

On December 6th 2019, Incognito and Neo signed an MOU detailing the direction toward privacy that the two projects would venture together. Neo’s co-founder, Da Hongfei, said of the collaboration,

“Privacy and user security are crucial for the next-gen Internet, and we’re delighted to partner with Incognito to deliver enhanced solutions. Our users and developers have always been at our core, and I am confident that this partnership will open up new and exciting possibilities for all. Hand-in-hand with Incognito, I am glad that we are building the foundation for next-gen Internet and the smart economy of the future.”

Now, as of March 31th, 2020, Incognito has completed the trusted bridge between the Incognito Wallet/pDEX and the Neo blockchain. This means that all users in the Neo ecosystem have access to total anonymity when transacting their tokens.

Cross-platform engagement with the Incognito Wallet

By transferring NEO or other cryptocurrencies to the Incognito Wallet, users can shield their coins and subsequently buy, sell, trade, or hold them anonymously. Coins are turned into privacy versions with a 1:1 value of the original. This means that when a user transfers 1 NEO into the Incognito Wallet, their balance is 1 privacy NEO (pNEO). It is then completely untraceable and can be used however they like. At any point, the coins can be unshielded and returned to their original version simply by transferring them out of the wallet.

Here’s a simple tutorial on how it’s done:

The pDEX, Incognito’s privacy-based solution for a crypto exchange, allows Neo users to buy/sell any pair they like. Incognito’s native coin, Privacy (PRV) can be bought and sold in any of more than 50 trading pairs. Currently, the PRV/NEO trading pair has been added. Users can add any NEO pair, and they can earn trading fees by adding liquidity for pairs within the pDEX.

With the Incognito Wallet and pDEX, data is not accessible to anyone but the user. Privacy for users does away with threats of theft and fraud, and makes the experience of using cryptocurrency much more convenient and safe.

The bridge is only the beginning

This development in the collaboration is groundbreaking for NEO holders and the crypto community in general. By partnering with a wide range of cryptocurrencies to give users privacy, Incognito is making cryptocurrency more feasible and useful in real-world applications. Because of collaborations like this one, we are ever nearing a global adoption of the crypto economy.

Incognito is a community of privacy-minded individuals developing cross blockchain solutions that power privacy for all. Community updates like the Neo bridge can be found here.

Don’t forget to read the Incognito Whitepaper and share your thoughts in the community!

More on the Collaboration (In Chinese)