It would also be helpful if in the app:

pDEX listed my balance of coin

that’s below the Preview button - is that what you mean?

When you drill into a coin in Assets, by shield/unshield buttons there was a button to take you to the pDex.

this is in the coin detail screen - on the top right corner. and it takes you to the relevant pair - to buy with PRV. there isn’t one for PRV though - there probably should!

Minor but on my phone at least, the Community button is below the fold. I vote for it being first in its section.

\o/ it will be different for every phone yeah, but probably should be bumped up!

that’s below the Preview button - is that what you mean?

Sorry, I left out a key piece of info.

I loose sight of the balance when I click into the coin to choose an amount. It would be great if I could still see the balance then.

there probably should be!

Shielding is of course an essential concept, and arguably, it requires its partner ‘Unshield’ to teach users what Incognito’s value proposition is: protect your crypto.

I could see a new user thinking that Shielding, then sending, would somehow keep their privacy, because they never “Unshielded”… so probably important to drive home that sending out of network, IS unshielding (which IS removing your privacy).

I have one more suggestion that I forgot to mention:
The ability to see your balance when sending crypto.

So, once you click into and are in the “Send” window, it gives you the option to input the amount and the address to send to, however, it no longer shows your balance, so you have to memorize the amount from the previous screen.
So, I often find myself having to go back to the previous screen to remember the amount, and then click send again, and toggle back and forth, (which already has a laggy, long load time, sometimes.) This is particularly an issue for me because I am often doing a lot of transactions across multiple wallets. Not sure how many others would feel this is useful, though it does seem intuitive to me.

Also, just to add on, the “Top Off” option to consolidate all your PRV into one wallet would be AMAZINGLY useful!! Especially at the end each week when I withdraw all my liquidity rewards across 12 wallets and have do to a ton of transactions and toggling just to get it all into one wallet.

Would it be possible to add “search” function to Assets page (i.e. the screen with Shield button)?

In case you miss it, I quote it

I have another feature request. I face deposit stuck cases frequently (you do not see them since I send PM. Thanks to @Ducky @phuong

). For such cases (deposit/withdrawal stuck), could you put a button for reporting? So the users can report these cases for fixing the issue via one tap.

Thanks - about the search function, I’m not sure this will serve a significant number of people (even judging by this thread, many users just focus on prv or a few major coins). It may make more sense to automatically sort by amount, as @FFa said. I’ll add it to the backlog either way, we’ll see if it comes up again.

About the report button, I believe the support team is working on a better flow for that. Should have some information soon.

I would like to see all PRV interest automatically added to the staked/provided principal PRV amount.

thanks for your feedback. i largely agree, and we’re brainstorming how to best solve this, as there are now additional concerns to take into account. if you are interested, my response above to crouton might shed some light about why the display is the way it is.

you are right in that PRV earned on BTC for example, is not being moved to PRV provision - it remains with your BTC, and compounds there, at that rate. users have the option to move it over to the PRV provision, but it’s their choice for now.

would you be in favour of changing the mechanism, so rewards for other currencies are automatically added to PRV provision, and compound there instead? it would mean that PRV is the only compounding currency, and other currencies earn APR (not APY). 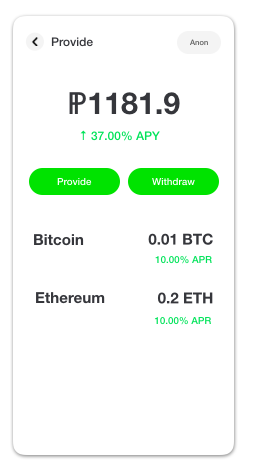 Would it be possible to add back the “live” counter to the “Compounding Rewards”, as that does help with the satisfaction element

Reasons against: For the sake of consistency - the deposit/withdraw logic is on the main screen of some other features, such as Provide, and soon, Add. The initial issues of users being unable to locate send out-network (possibly an expectation left over from the old app), also seems to have been solved by text hints.

Shielding is of course an essential concept, and arguably, it requires its partner ‘Unshield’ to teach users what Incognito’s value proposition is: protect your crypto.

I agree for us tech, privacy minded guys it feels like the right way. The question is what do we want to achieve? Attract only more tech, privacy guys. Let’s keep it like it is.

But if we want the average user to use our wallet, we should do it like suggested. In my opinion a good privacy solution should just do his job silently in the background. So let’s keep it as simple as possible and let the magic happen in the background

Another improvement proposal: Is it possible to synch the balance updates better somehow? Right now e.g you send or trade and after a while the account which created the transaction will show the reduced value but in the counterpart wallet the new value still does not show up at all. This creates always a lot of confusion and fear in some people. I convinced now some friends to start using incognito and they always called me nervously wanting to know if everything is ok etc.

Is it possible to synch the balance updates better somehow?

i totally get you. this is down to a few reasons.

with trade for example, it’s actually multiple transactions - all executed automatically behind the scenes to make the user experience more fluid. this might explain why funds are deducted, but the newly purchased asset takes a while to reflect. sharding also complicates things slightly - if you’re interested, here’s more information.

we are also struggling a little with notifications not lining up - and will be looking to improve these discrepancies going forward. in the meantime, we’ll try to tweak the messaging in-app and guide users better, so as not to cause unnecessary panic!

Can we have the combined balance from all keychains on the home screen at the top. Dollar value would be icing on the cake.

The intend is to understand the total values of all my assets on incognito like my net worth here.

Only if the app can track receiving history (just like it does with sending history) of my account then it would be great. Like when and how much did I receive the token

Probably good to have some sort of status check on the Node portion.

I have worked in both ui & ux. I am currently working on an app wide redesign of Incognito.

It is in wireframe stage currently, I am sure there are many things I haven’t thought of because I not regularly talking with the team and devs but hopefully it will give some ideas.

I have downloaded dozens of wallets and financial apps. It seems so far you guys are going clean ala cash app. Cash app is good and friendly, so is Robin hood (tho less since redesign).

It’s important to keep this. The best UI I have seen from any wallet is Exodus wallet (Im on Android) they have some very clever ways of giving you lots of info cleanly. It is simply beautiful and I recommended you downloaded it and play around to see what they do. I would be overjoyed if you guys copied it. Best parts I can clearly see:

Cheers for now. What the best place for me to post my ideas when they are ready?

Hey, looking forward to seeing it! Many of our members here are already in the process of building out the incognito ecosystem, including web wallets and dexes.

and if you have or are starting a build, post it in the core-dev/building category:

Thank you. I am very stoked for this project. I believe privacy, decentralization, and permissionlessness are the essence of crypto and without those three they are nothing. Incognito allowed me to feel more comfortable getting a coinbase account knowing I can fling it all into a black box.

Forgot to ask, could we have a night mode? Just invert the white and the black? I do a lot of tinkering in bed and my phone gets veeery bright