2021 isn’t here yet, but for us at Incognito, we’re one month into a new year (our first birthday was last month). And with that new year came a new drive, a fresh disposition toward this mission we’re on, to bring privacy to crypto.

Last year, we built a fully-functioning privacy ecosystem that includes the first anonymous, trustless DEX, the first multi-currency privacy wallet, the first trustless bridge to Ethereum, and quite a few more “firsts”.

This year, we set out to make it self-sustaining. We’re building all of the extra details and safeguards that prepare the network for release. It’s an intensive checklist that, when completed, will turn Incognito into a fully autonomous privacy network, run by you.

We’ve been at it for a month now, so it’s time to pause, reflect on what’s been done, and plan for what’s ahead.

The 2021 privacy roadmap lays out three essential ingredients for making Incognito a fully-decentralized and self-sustaining shield that protects you from the growing threat of surveillance: Privacy, resilience, and ownership.

Each category has its own set of goals to reach, and many take multiple months to complete. We wasted no time getting busy in November. In the sections below, you’ll find a list of projects we started or continued this month, as well as a brief description of the main purpose of the project.

We already built privacy, and every transaction you make on Incognito is anonymous. Now it’s time for Privacy v2, focused on ease of use, and extending privacy to every blockchain application. To that end, this month we’ve been continuing to build Portal, and developed and tested new privacy features like confidential assets and one-time addresses, which hide more transaction details and prevent transactions from being linked to one another.

For the network to be released, it has to be tough enough to stand on its own two feet. To ensure privacy can withstand anything, we’re testing every part of Incognito, and building some long-awaited features. Chief among them are things like dynamic committee size and dynamic sharding, which boost efficiency and help the network scale. When finished, we’ll be able to release the fixed validator slots as well!

In November, a big part of increasing resilience was testing. We’re taking the time to thoroughly inspect what we develop at each stage.

We’ve said from the start that Incognito isn’t a company, and it’s not just the core team. It’s all of us. While we’re stewarding the network for now, every step we take brings us one step closer to handing it over to you. This month, we made progress toward growing your control in several areas:

Privacy products like the wallet and pDEX (app) give you control over your personal privacy, while the Nodes like the coming Node Tree give you a piece of shared control of the privacy network. Documentation and an API layer make it easy for builders to take charge of development alongside the core team.

In November, as in every month before, growth has been accelerating project-wide. In fact, we hit 3 major milestones this month, one in each of the categories below. Here’s a bird’s-eye-view of the month’s progress:

Shield volume was a major focus for us in November. When a large amount of people anonymize a large amount of crypto, it proves that Incognito’s mission is important, and that we’re addressing a real need in the world.

This month, $7 million worth of crypto was deposited in the Incognito network. To put this in perspective, shield volume grew to $2 million from the launch of the pDEX in Nov 2019 until mid April 2020. From then to the end of Nov 2020, it has now grown to reach $33 million. 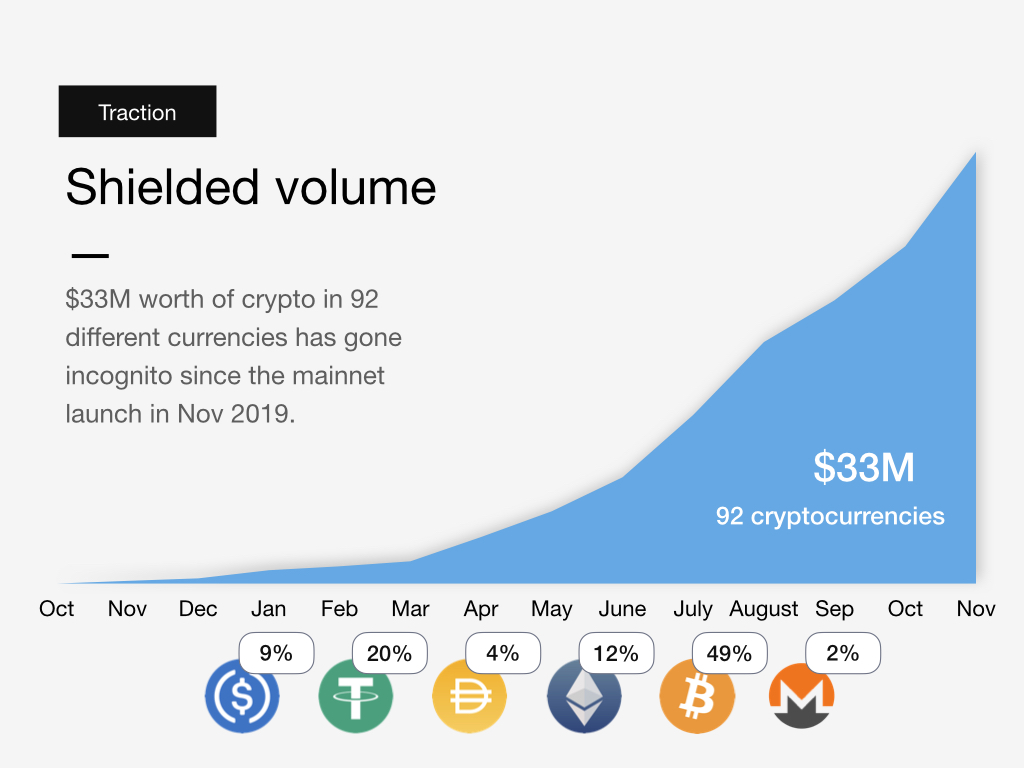 We also saw some unique applications of trading pop up in the community, as liquidity pools for QUEST and LOTTO tokens were set up and people bought and sold what they earned in the Privacy Quest. 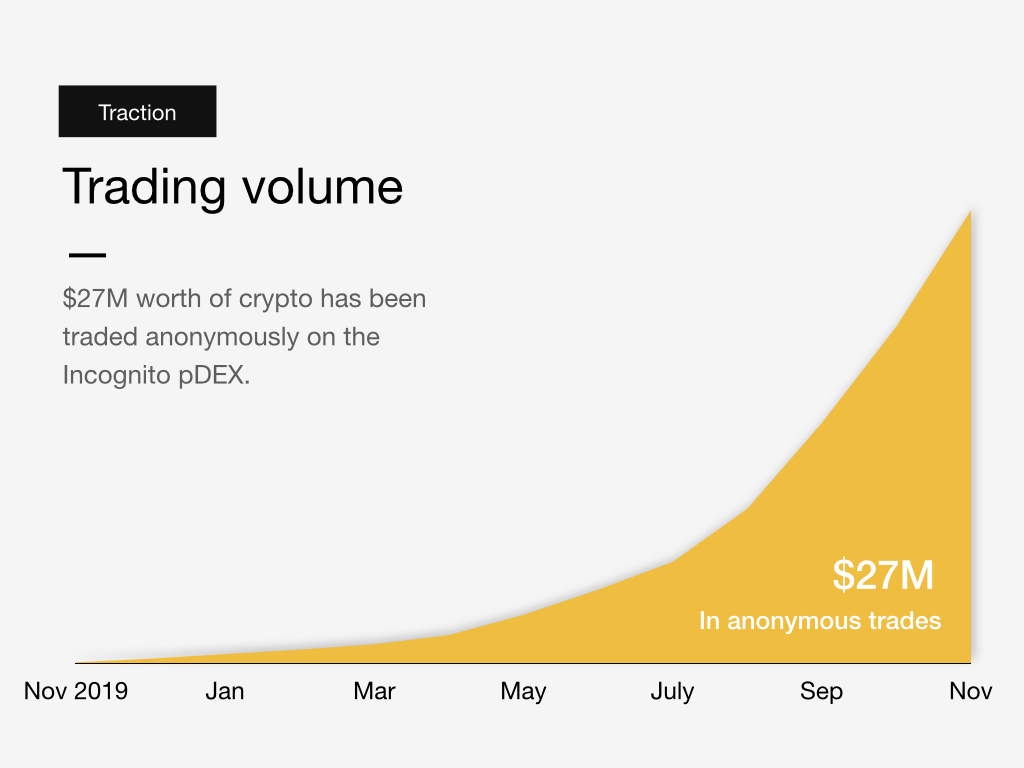 Liquidity is vital to the utility of a crypto exchange. The more liquidity in the pDEX, the more crypto can be traded anonymously. In November, pDEX-only liquidity grew 46%, from $12 million on Nov 1st to $17.5 million on Dec 1st.

But that’s not all. We reintegrated Uniswap into the pDEX, bringing total combined liquidity to an astounding $1,175,000,000. 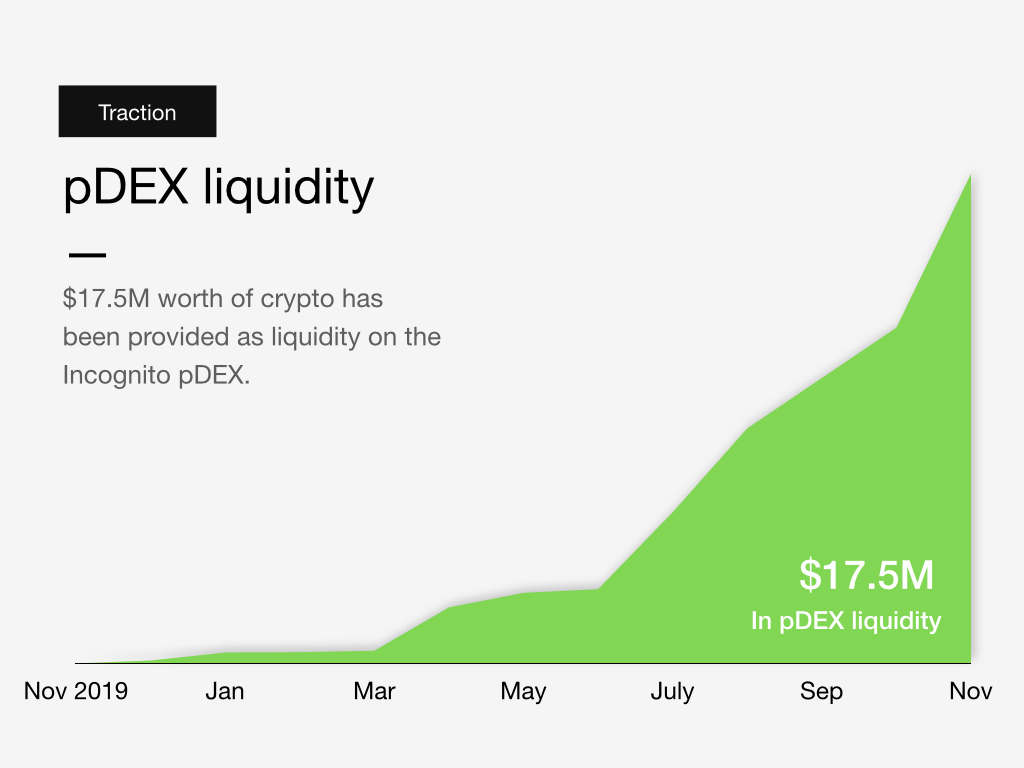 One of the most promising signs that Incognito is flourishing can be found in the Builders category. Multiple new projects were announced, existing products were improved, and both competition and output increased. To push the program to a new level of quality, we raised the bar and tightened eligibility criteria for the rewards program, and builders took the challenge in stride.

You can build for privacy, too! With Incognito, you’re free to build any privacy product you want, however you want. If you’re interested in the rewards program, take a look at the eligibility criteria.

That’s enough looking back for this month, it’s time to get excited about the future! There’s no shortage of development goals for the month of December.

For the month of December, we’re strengthening the layer-1 core with intensive quality control, and the layer-2 core with further improvements to the user experience (a second round of pDEX updates, a web extension, an HD wallet feature, and more). We’re seeking out partnerships for the Privacy Quest, and delving into R&D that will enable us to innovate and iterate frequently. We’ll also be moving into the first implementation stage for many of the projects we developed and tested in November.

Build a sticky and engaged community

Quality control and development processes for:

Progress is best when everyone is involved. You can join the privacy effort, and even get rewarded for what you contribute. Check out the Builder Rewards program if you want to build privacy for the world!

You’ve read this far, and heard what we have to say, so now we’d like to give you a chance to share your thoughts. Join us for a lively chat with the core team and the rest of the Incognito community in the next PRV Holders call.

Please be sure to RSVP here.

Until next month, see you in the call and around we.incognito.org.