Gary Gensler, US president Joe Biden’s pick for chair of the SEC, is positioning himself as somewhat of a friend to crypto.

In his confirmation hearing, Gensler admitted his desire to regulate crypto to “protect” investors, while also suggesting his optimism about the positive impacts crypto and related technologies will have. It’s a bit of a mixed bag, but hey, it’s the best we’ll get from an organization whose sole purpose is control (government).

The US is certainly not the center of the world, especially the crypto world, but what the US does in the next few years will without a doubt influence the stance much of the rest of the world takes toward cryptocurrency.

Based on the continuous support cryptoassets are getting from companies in the US, and the hesitant-but-open stance of US regulators, we’re looking at the beginning of a new era for cryptocurrency. That is, the era of mass adoption.

If millions of new crypto users are on their way, most of whom still think you have to buy Bitcoin in whole numbers, then we’re going to need to change the culture of crypto.

The primary conversations currently are arguments between two parties:

But as soon as we hear the confused but enthusiastic grunts of the hordes of newcomers, we’ll be forced to stop and figure out how to onboard them all. 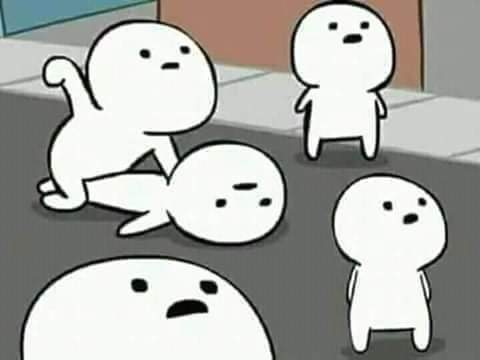 (Praise to the artist, whose name I could not find)

But regardless, the times are a-changing, and crypto is moving from an insular industry of nerds to the workin’ (wo)man’s party.

Which brings me to what we’re going to do about it.

If you’re reading this letter, it’s probably because you have monk-like patience and are dedicated to privacy. We all know how much I write (my letters are getting longer, aren’t they?). And not only that, but you’ve had to do quite a bit of digging to understand the ins and outs of Incognito.

Not everyone can do that.

In February, we decided to fix that. We brainstormed how to transform the face of Incognito, to be even more transparent and easy to understand. We need to be transparent enough for crypto veterans to know the project is legit, and simple enough for anyone to start using it. It needs to be shareable, wearable, and community-led.

So, we spent time gathering feedback from you, and brainstorming how to restructure all of the information we have available. In March and April, we’re going to take what we’ve learned and make the frontend of Incognito as effective as the backend.

It may have seemed like we slowed down in February, but nothing could be further from the truth. Just because Bitcoin dipped doesn’t mean we did

As you’ll see below, February was the largest month of growth we’ve ever had, and given not only the coming project redesign but also the new features launching soon, that growth is likely only going to increase. 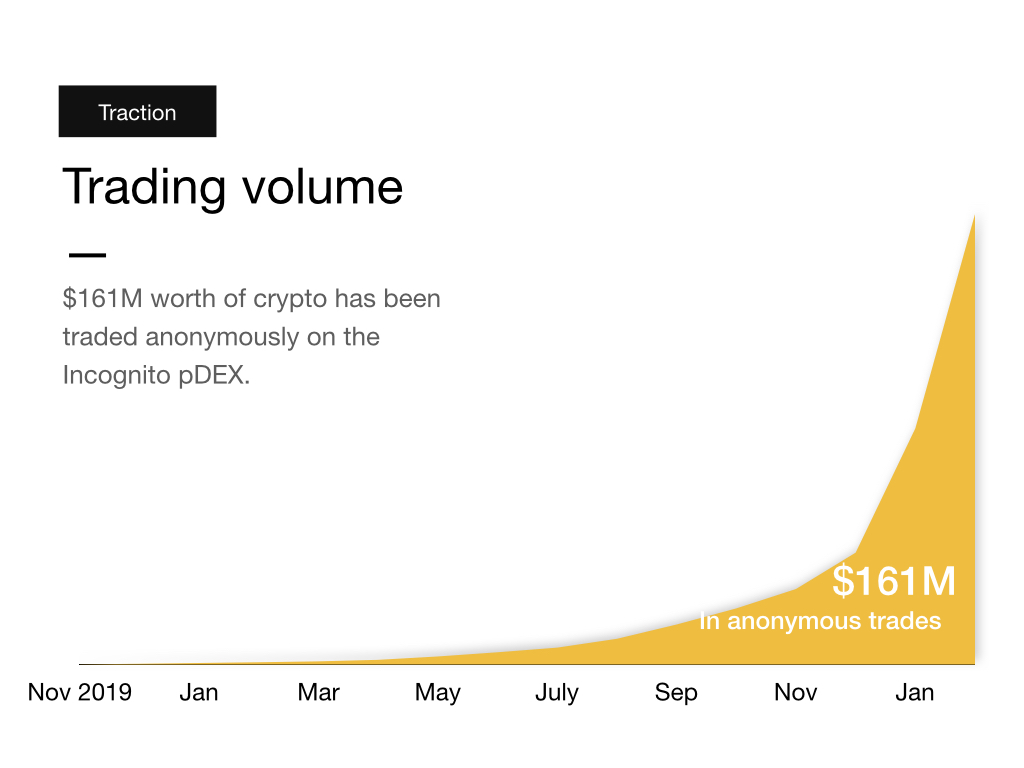 Corporate adoption of crypto is a threat to personal privacy, because your data is valuable. To avoid being the product, people are trading their crypto anonymously more than ever. Let’s keep up the good work and continue sharing the pDEX with anyone who could use privacy. 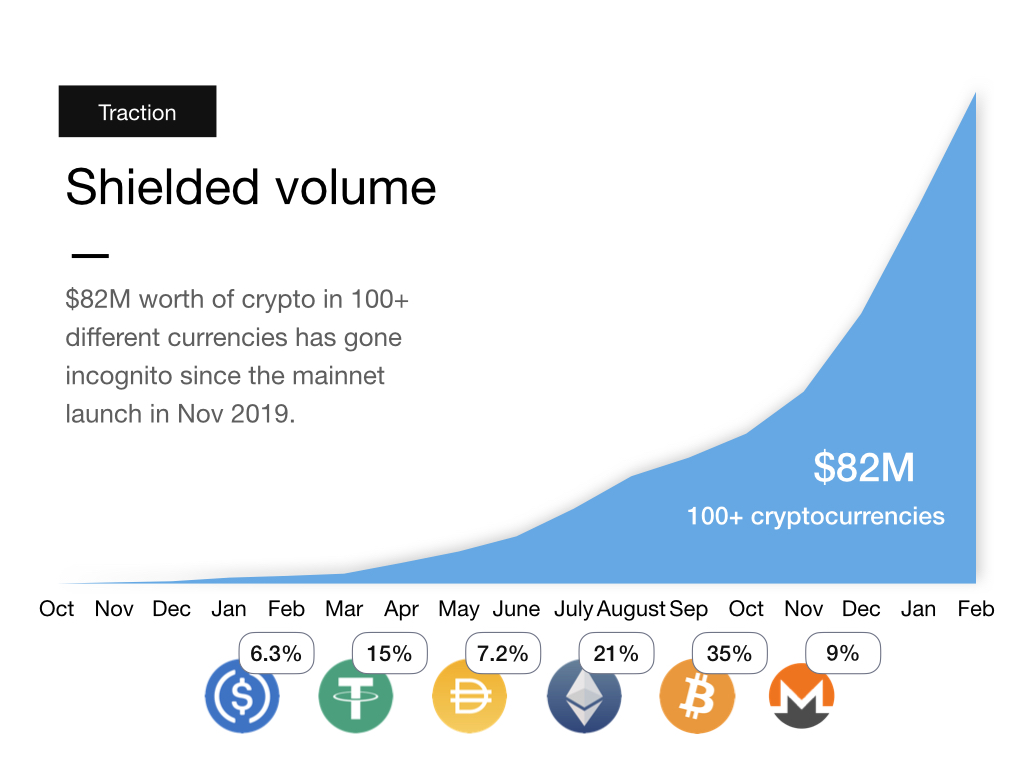 Almost every month, Incognito grows faster than it did the month before. The last two months of shield volume growth account for about half of the current volume. 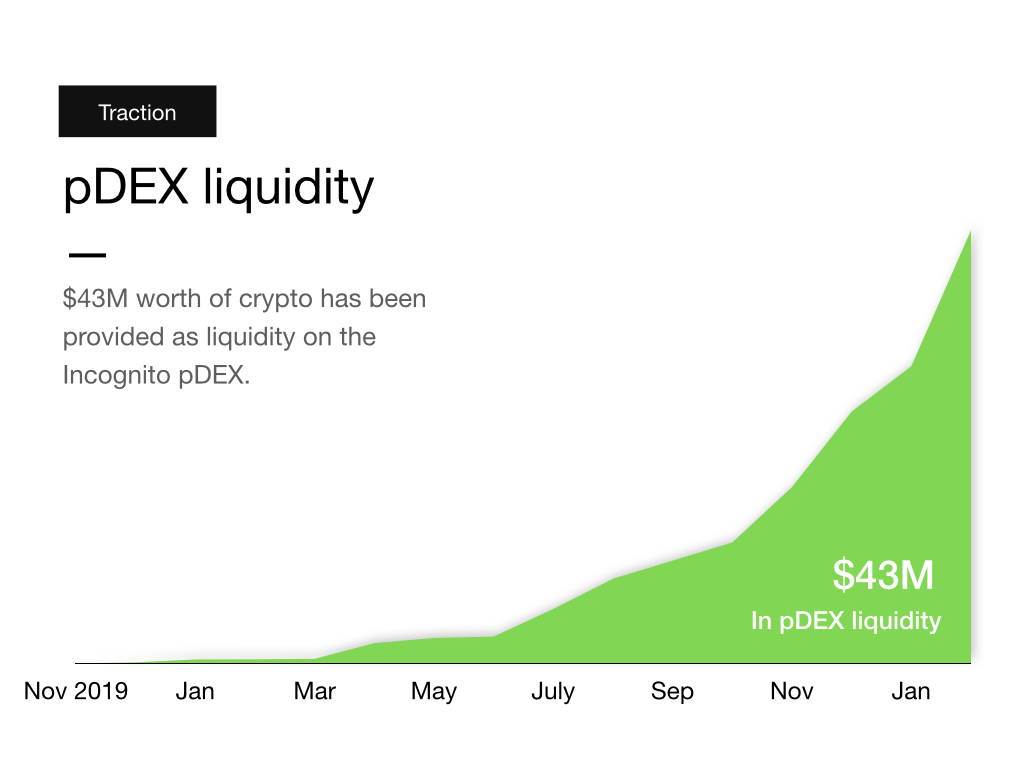 With daily trading volume at all-time highs, it’s important to have enough liquidity to enable people to trade freely. Liquidity in the pDEX is up $14 million from last month, a growth of 311% compared to the previous month.

I’ve been promising some key features for months now, and it looks like my word will be made tech (John 1:14, anyone? No?) very soon. Across all aspects of technical development, most features have moved beyond initial testing and into revision phases, preparing for launch.

Growth efforts were… forewent? foregoed? We decided to forego active growth efforts in favor of user research and planning for the redesign, so when we do seek new users, they’ll have easy access to all the information they need. @Elena did still send requests to listing sites like CMC, and I spoke with multiple journalists about coming feature PRs, but I decided to wait on them. We also welcomed new members to the growth team in February.

We still need your help as community leaders to create the community that will soon lead the project, but it’s not fair to ask you to do all the work, after all

A few development highlights include:

Increasing the scope of privacy is always a top priority. Privacy v.2 will launch by May. In February, key updates include:

The next PRV Holders Call is this Thursday/Friday! Join us for the usual progress presentation, and to discuss up-and-coming hot topics, such as:

This month, we want to experiment with a new time for the call. Be sure to add it to your calendar!

RSVP here, and comment with topics you want to discuss on the call.

Don’t wait for next month -

Get involved this month! We’re launching a bunch of new features and updates, and growing quickly. The community needs people like you that are familiar with the project to help guide the community forward. It won’t be long before the entire privacy movement will be 100% community-led, and we need to be prepared.

So, share your thoughts, questions, and ideas here, and let’s bring privacy to every crypto user on the planet together.

Thanks for reading them, and for the encouragement @Tempestblack!

Great work from Incognito, as usual. Keep it up!