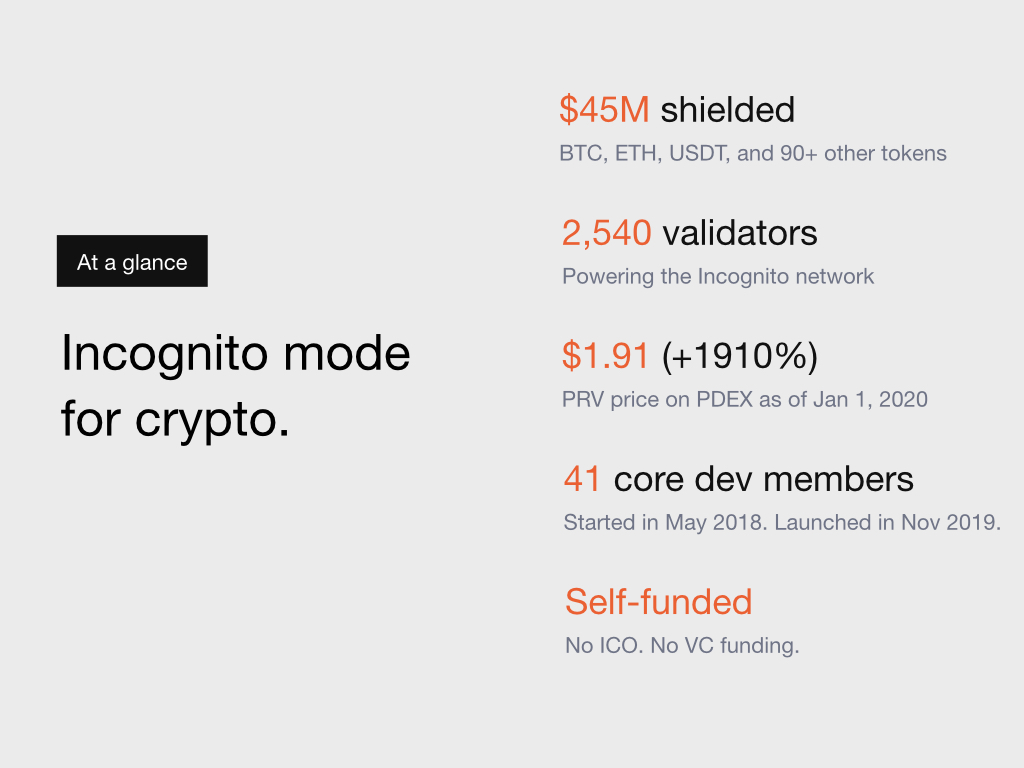 A fitting finale, December ended 2020 with an incendiary collision between the cryptosphere and the rest of the world.

Institutions bought up Bitcoin at an unprecedented rate, and a combination of factors drove it to an all-time high nearly double its previous high.

Privacy coins were delisted across exchanges, after which trading volume on the pDEX reached an all-time high of $2,756,566 in a single day.

The McRib came back.

For all the chaotic energy of 2020, December managed to end the year with a bang.

For us, this is confirmation of the importance of the cause. Crypto has the attention of the entire world, and privacy is under attack. Without the right tools to protect our privacy, we, along with everyone making the leap into crypto, will be vulnerable in the year ahead.

Thankfully, Incognito and its community wasted no time recognizing this opportunity and acting on it. We have the tools. In December, we worked hard to upgrade them and spread the word about their existence.

As a result, December was a month of heightened growth. Multiple all-time highs, new privacy innovations, and an engaged and expanding community made for an overwhelmingly positive resolution to 2020 in the face of the tightening censorship that confirmed the fears we set out to prepare for back in 2019.

Like us, you believe in the need for privacy. Now more than ever, that need is threatened, and it’s Incognito’s time to shine. As we look at what was accomplished below, keep in mind one thing:

December was the end of the prologue for Incognito, and the fight is only just beginning.

Our efforts this month were focused on technical innovation and user growth. On the technical side, we worked to make Incognito a self-sustaining privacy powerhouse. We upgraded the layer-1 protocols that power Incognito, as well as the layer-2 privacy tools available. On the growth side, we leveraged relationships with other projects and their media presence to reach tens of thousands of new people.

The privacy network has already been built. It works, and thousands of people are using it to protect themselves. But there are ways to strengthen the network and mature the project, which is what layer-1 work is all about.

Development projects like confidential assets, and one-time addresses expand the ways you are private when using Incognito, adding additional layers of protection. This month, we finished initial testing on them, and are ready to deploy them in the testnet.

The long-awaited dynamic committee size, which will make the network more resilient and further decentralize aspects of it, is also ready for testnet. We also finished testing on Portal v3, the latest upgrade to our decentralized bridge to Ethereum. It is undergoing final processes before launch in the mainnet.

Layer-2 is privacy in action. To benefit from privacy, you have to be able to use it. The Incognito app allows you to trade and transact your crypto anonymously, but we’re not content to leave it at that.

This month, we sought to build more ways for you to use your crypto privately. We tested the HD wallet feature, which will make managing your keys much more convenient and secure. We also launched pUniswap, adding more than $2 billion in liquidity for you to trade against. We even began developing a payment gateway for Incognito so that businesses will have a way to easily accept PRV and pTokens (BTC, ETH, etc within the Incognito network).

By now, you’ve heard it a million times: Incognito is a privacy movement. It’s a growing community of people like you committed to protecting privacy in whatever way they’re uniquely primed for. A crucial part of our efforts each month is to set that community up for success, and to ready it to take the helm of the Incognito network soon enough. To do so, we need a large community of engaged users.

The Incognito community has responded to the regulatory challenges with unmatched intensity. Our core growth efforts were met with enthusiasm and shared by the community across platforms.

Arguably the most engaged would be the builder community, for whom we host the monthly Builder Rewards Program. Voting for the final month is underway. Once finished, we’ll take what we’ve learned from the program and dream up something even better.

In December, we officially launched the Privacy Quest, and established connections with influencers and crypto projects to promote it. As a result, the Incognito app had over 3,000 downloads, and 2,000 new Quest players just this month. Shielded transactions also grew by more than 20%!

@Ducky also lead an initiative this month to make the forum a place people want to spend their time. That went wonderfully, as the forum became 30% stickier.

At the start of the letter, I noted that we had multiple all-time highs. Following the trends of every month since Incognito’s inception, shield volume, trading volume, and liquidity jumped considerably.

These three metrics are important measurements of Incognito’s health. If shield and trading volume are up, that means more people are using Incognito to protect themselves. It’s no surprise, then, that when lawmakers stand opposed to personal privacy, the privacy network hits its stride. 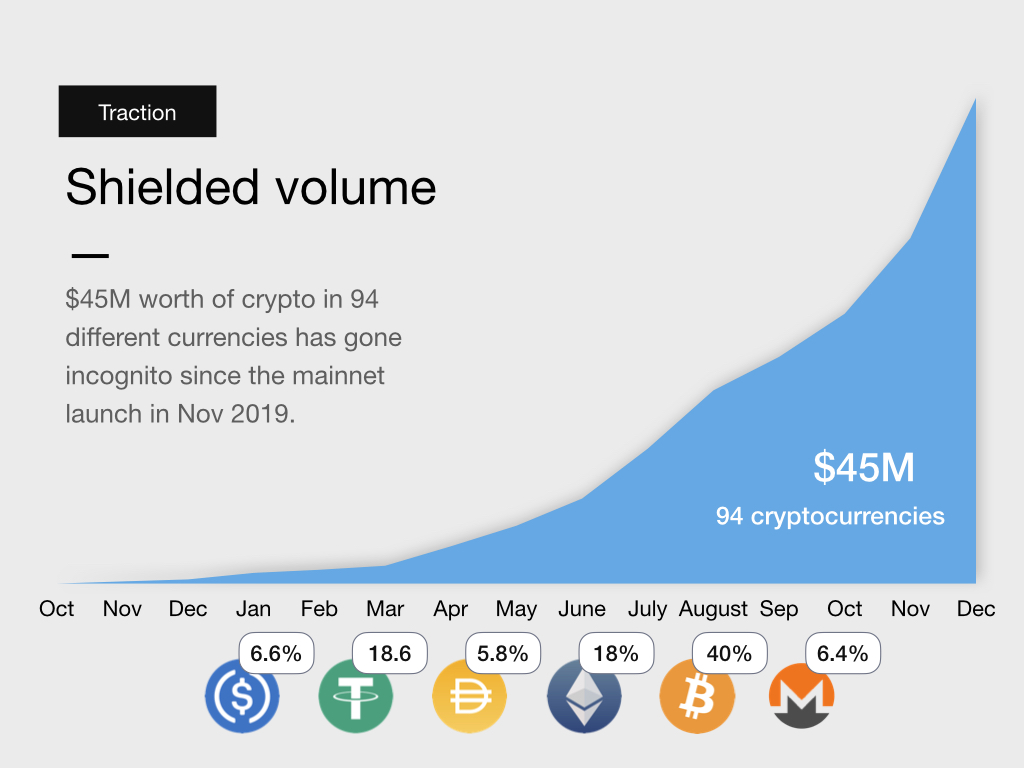 Unlike previous months in which we aimed to grow shield volume (calculated in USD), this month our goal was to grow the number of shield transactions. The shift is intended to make sure Incognito is being used frequently, rather than infrequently but with high dollar amounts. It’s a more equitable focus. With the increase in users from the Privacy Quest, however, we saw both.

This month, shield transactions are up 20%, and $12 million worth of crypto was anonymized in the Incognito network, bringing the total to more than $45 million. Not only is this an all-time high, but $1.8 million of it was shielded in a single day in December, another all-time high. 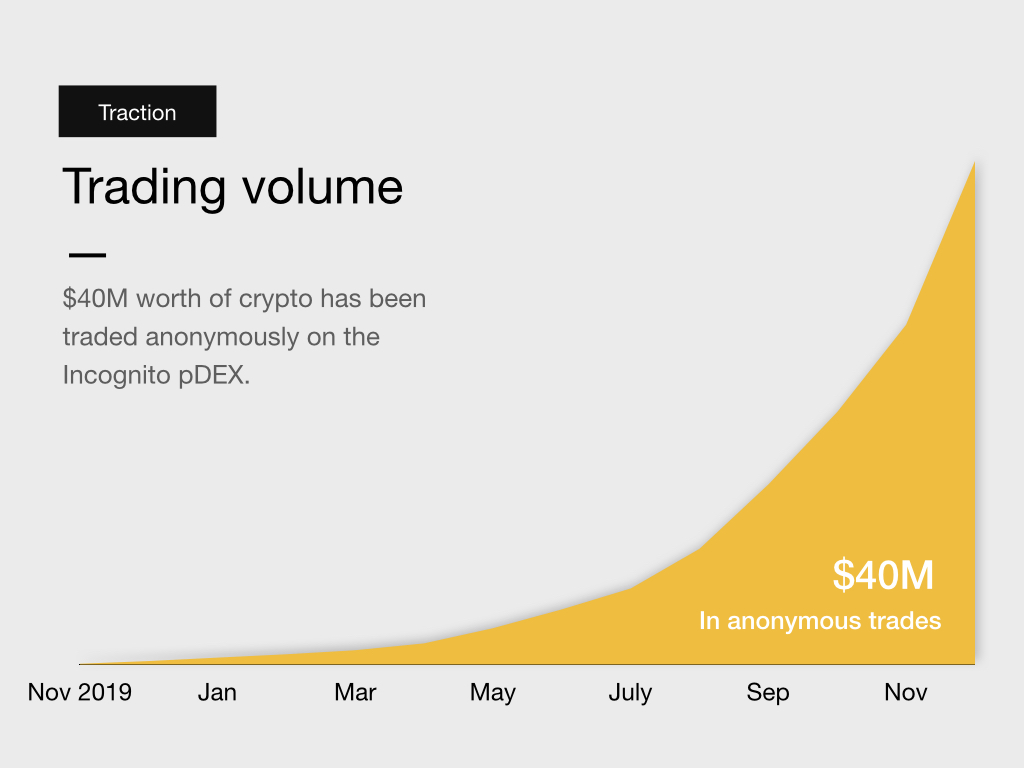 The amount of money being traded on the Incognito pDEX is rapidly increasing. December was the latest in a string of consecutive all-time highs, with $13 million being traded anonymously in the pDEX. Total volume is more than $40 million. 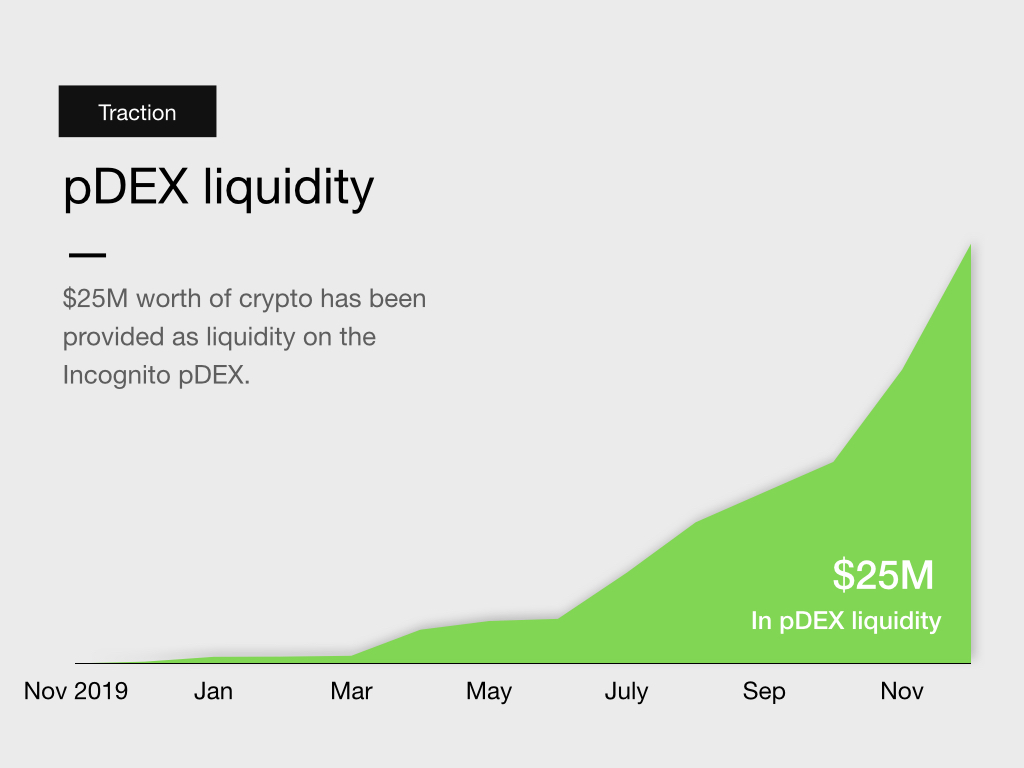 The integration of Uniswap brought total liquidity to over $2 billion, but that’s not what this metric focuses on. Liquidity provided directly into the pDEX skyrocketed this month, adding $7.5 million to local pools and bringing the total to nearly $25 million.

All three growth metrics are indicative of a healthy community that uses Incognito regularly. They point to a successful holistic effort to improve the project on all fronts, from its code to its community.

Building privacy is not a solitary endeavor. For privacy and freedom to reach all corners of the globe, it needs to be propagated by the people. The Builders category houses multiple ongoing projects that expand the privacy ecosystem in a decentralized manner.

If there’s a privacy product you wish existed, try your hand at building it! The first Builder Rewards Program has ended, but something new will be announced in January.

December is over, and it’s time to move into the new year. But the changes December brought persist. In the first month of 2021, we’re working to make Incognito THE beacon of privacy in an increasingly surveilled and regulated world. This means we’ll need to continue our growth efforts, and make sure the network is ready to welcome the world at scale.

Here’s what we’re doing this month:

No matter what you’re good at, you can help privacy thrive. If you’re a builder, you’re your own boss! Build the product you want to see in the privacy ecosystem. If you’re enthusiastic about privacy, share it! And if you have ideas or questions, post them here at we.incognito.org.

If you want to get more involved, ask questions, or talk about what we’re doing to push back the growing tide of regulatory overreach, join us for the January PRV Holders Call. In it, you’ll get the latest on the project, as well as a chance to have your questions answered live. This call, you’ll also get an introduction to the new builder rewards program.

Be sure to RSVP with this poll, and comment your questions in advance.

That’s all for this month. If you want to help spread privacy, share this letter on your favorite social platforms or with your friends/colleagues. Be vocal about your privacy concerns, and share your thoughts with us here.

In the meantime, see you on the call and around we.incognito.org.

And about ledger integration?

Overview: As the Incognito network grows so does the value of the chain and the possibility of a hack such as attempting to steal someone’s private key or malicious software such as a wallet app pretending to be trusted increase. The Incognito team not only wants to develop the world’s best privacy chain but also protect user’s assets therefore we are planning on bringing Incognito to the hardware wallet developed by Ledger(https://www.ledger.com/). This will provide our users with a more secur…