By executing my past proposals, I have learned that most of the members in crypto investor communities do not care much about privacy. It has turned out that working with such types of communities doesn’t directly lead to the growth of real users depositing funds into the app and trying out various privacy features.

So, this month, since the ultimate thing we are aiming to do is increase the shielding/depositing volume, I want to be a part of this goal by fixing the aforementioned problem.

I will approach the Monero community through different channels and explain to them the similarity between our technology and Monero’s, and the better features Incognito has. At the end of the day, I will try to convince them to shield their XMR via the Incognito wallet.

Last month we launched a bridge and promote is as a way to buy/sell monero privately.

It’s a unique way to trade XMR confidentially, so the main focus will be this feature and will point users directly on pDEX (which affect the number of Deposited XMR linearly). I am going to pitch this feature from 3 different angles:

The base line
From the middle of Feb to the end of March, we witnessed around $9K shielding volume of XMR in total. So, I am thinking to Increase deposit number at least in 2 times for April.

This proposal is a part of the one of the core team’s main goals - to increase the volume of shielded crypto.

Incognito is a project owned by the whole community. So feel free to add your thoughts and suggestions, and feel free to participate in meeting these goals with me! I value your ideas.

Hey @jason, your proposal got 5/5 vote from the board. I will move this to funded proposal category. Looking forward to hearing update from you!

Hi guys. This is some updates for this proposal in the first week of April.

So far, we have got around $1,910 shield volume from XMR users (The price of XMR was capped at Friday’s rate).

What I have done in the first week is immersing myself in XMR community, filtering the most active members and chatting with them. You can follow up my conversations with them here (I shared it with andrey)

The plan for next week is:

Thanks Jason. Good start ! Would be awesome if you could make some kind of article to share what Monero community thinks about Incognito.

Since they are the most privacy oriented, the feedback could help us to target right users.

Thanks, Andrey. Great advice. Actually I dropped it in my update above. Would love to hear more advice from you!

Hi guys, It’s a bit of an update for the week for the second week of April 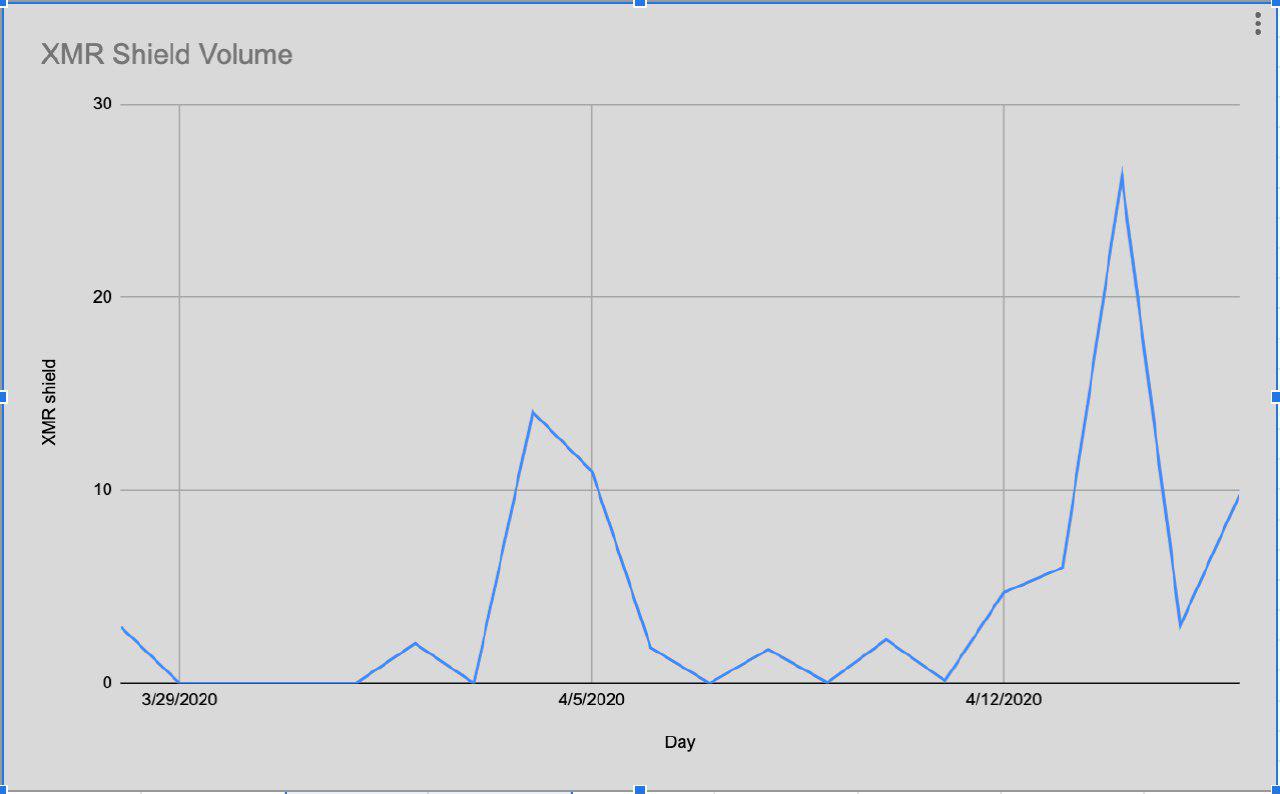 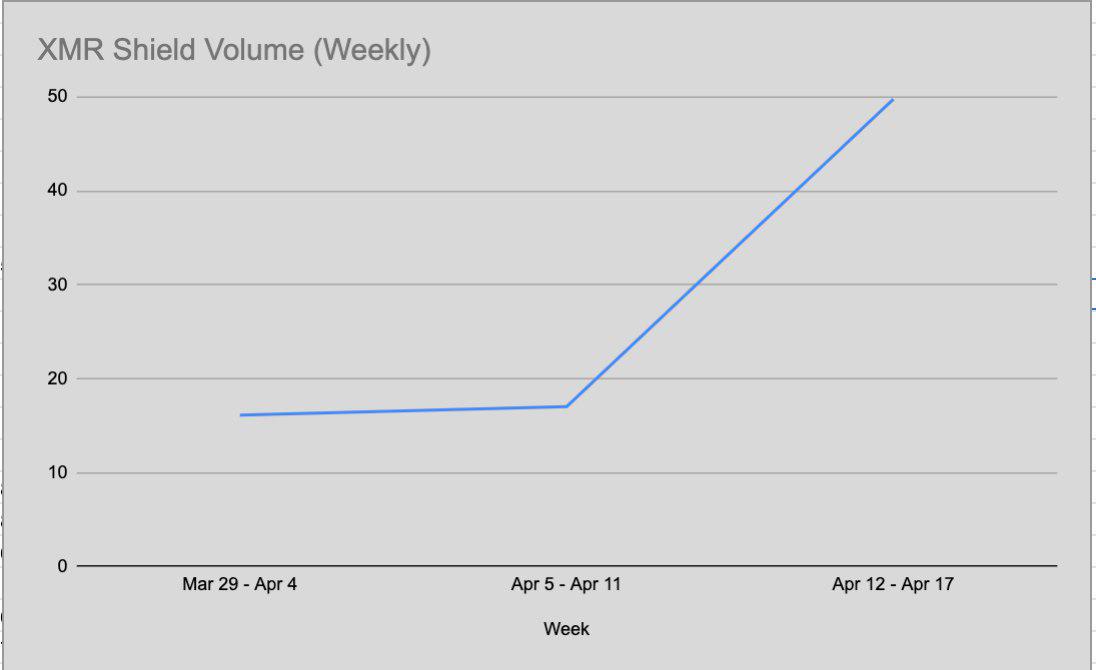 What I have done and am doing

It’s a bit hectic week with the main proposal and other tasks of data analyzing along. In the week, this is what we have had 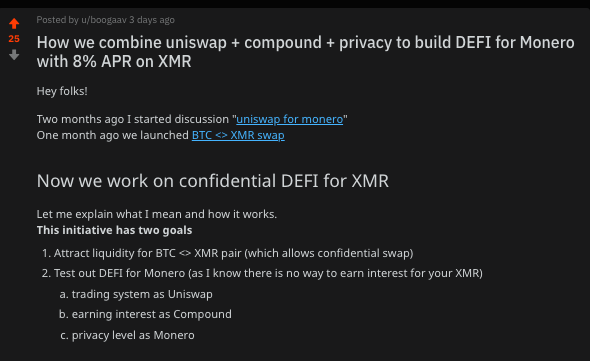 Plan for next week

thanks for the update @jason. there definitely seems to have been a marked influx of monero users to the site lately, in addition to the spike in shield volume. well done!

love that you and @andrey are working in parallel to fix the liquidity issue in the XMR pools. do keep us updated on that front!

Monero Podcast: I hope to have a deal with Douglas Tuman next week

what kind of ‘deal’ are you referring to here? is this a paid placement? do you have an idea of how to present Incognito in the podcast?

I’m thinking of dropping a piece on our technology idea on the ‘idea’ part of CCS category of the monero website. The idea should be: we strongly apply monero’s technology in the more scalable network. We don’t necessarily need the XMR community to fund us, just post there to have their attention.

how are we doing with this? would love more details on this too. i think it’s a smart move – i would bounce ideas with @phuong who built the XMR bridge, as well as the core dev scalability team to draft a solid proposal.

Hi @ning. As for your questions, I would like to give out my answers:

what kind of ‘deal’ are you referring to here? is this a paid placement? do you have an idea of how to present Incognito in the podcast?

So Douglas Tuman usually interview projects in Monero ecosystem or that are Monero-related. The ecosystem is actually quite small, so all the guys who are building up things for Monero are all welcomed without having to pay a penny, as I research. So, the ‘deal’ here is that Incognito’s representatives are to be interviewed by Douglas to talk about

The above 2 ways of calling us would bring Incognito a unique position in the Monero community.

how are we doing with this? would love more details on this too. i think it’s a smart move – i would bounce ideas with @phuong who built the XMR bridge, as well as the core dev scalability team to draft a solid proposal.

I’m writing the draft. After that, I will send it to the devs team to check if the technological materials in my writing are enough. I do see eye to eye with you on the point that the proposal should be solid to be watched by the Monero core devs team. So it might take time to finalize this responsibility.

Hey Andrey. Thanks for the comment. Would definitely take your idea.

Hey guys. It’s a bit of an update for the 3rd week of April 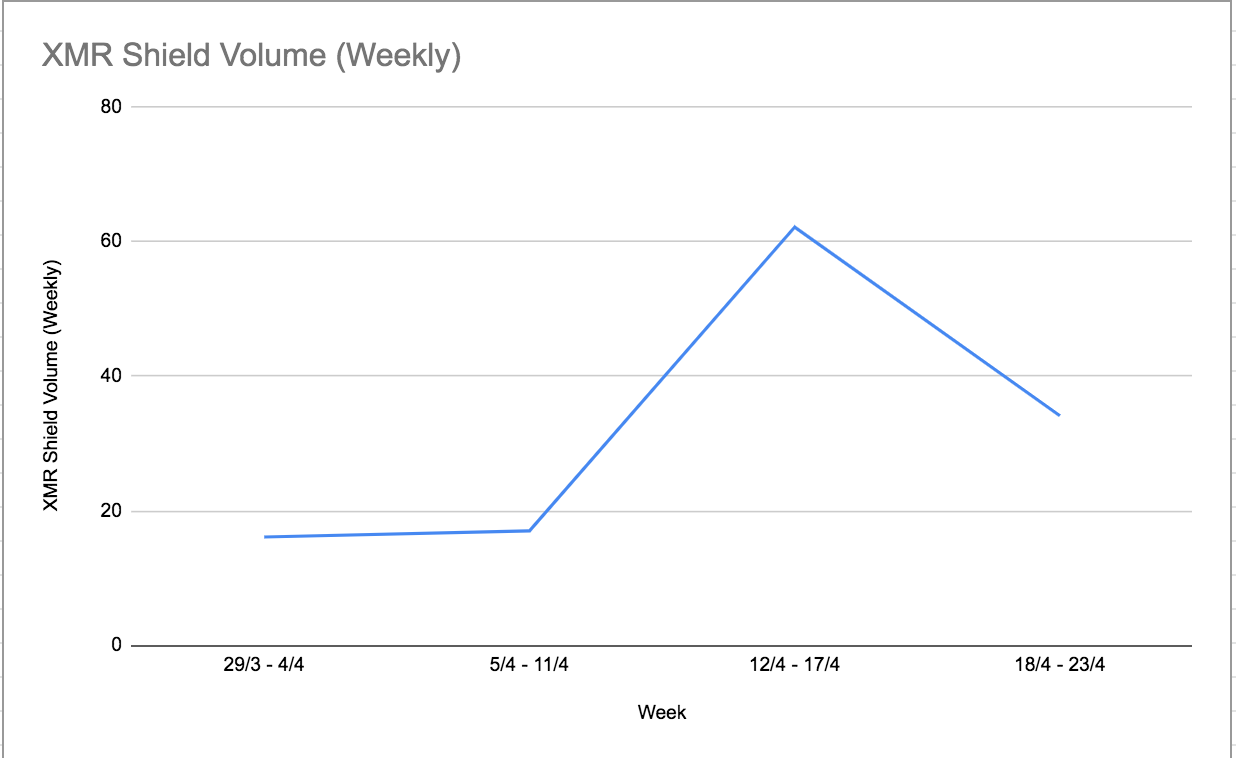 All cryptos are in bull, making the total XMR shield volume in April reach $7,900 (129 XMR). Compared to which in March, we are at +209% MoM. However, the dark side of the picture is that the weekly XMR shield volume has decreased by 37% in the 3rd week or April. (I will explain the reason below)

What I have done 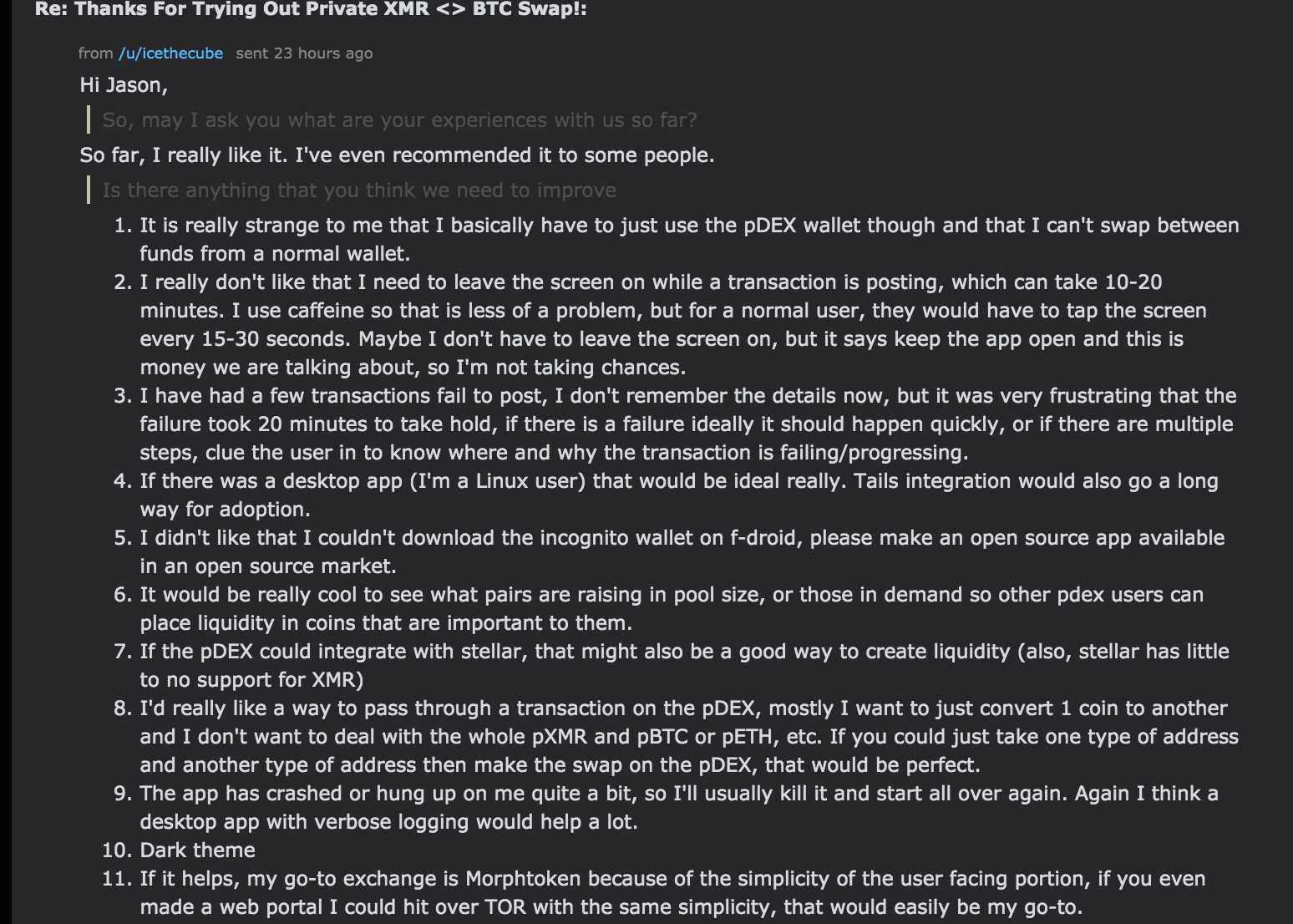 It explains the weekly decrease. I kept up the current conversations but didn’t start many new ones. That’s why we haven’t acquired new influxes of XMR users to keep the weekly growth momentum. I will try to fix this problem in the next week. 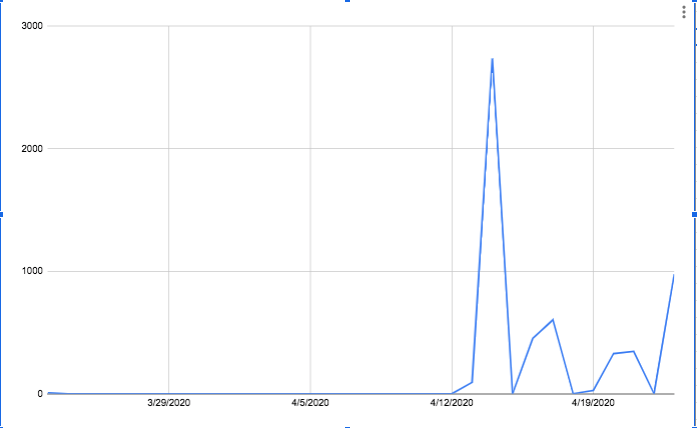 (PRV-buying-via-XMR trading volume: 751 times compared to March. Numbers don’t mean much here. The thing is instead of having nothing, we have something here) 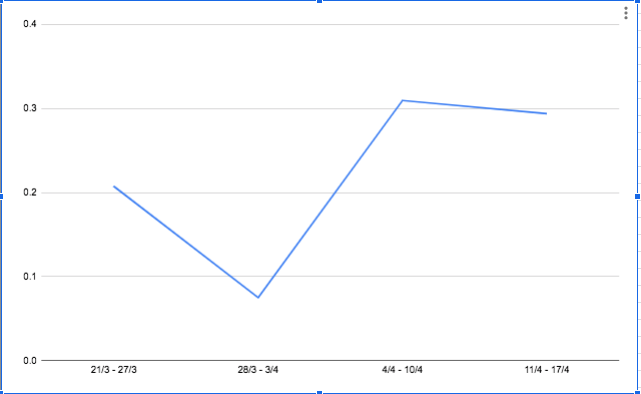 I personally enjoyed reading the actual comments from users, they were slick and had many points worth considering.

Hi guys. It has been a good week for all Incognito network. I would like to give out the final update for this April proposal.

Overall, the total XMR shield volume I got was around 78% of the KPI that I committed in the first day of this month. The bright side of this result is that we are at 480% MoM. 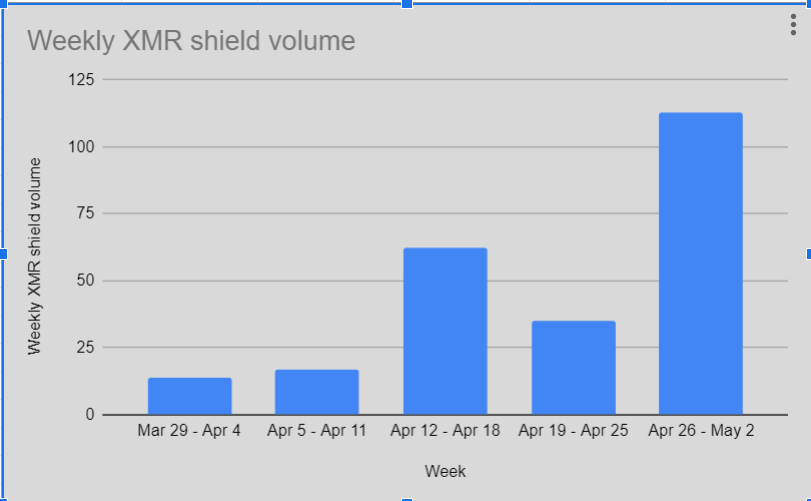 (XMR shield volume in each week) 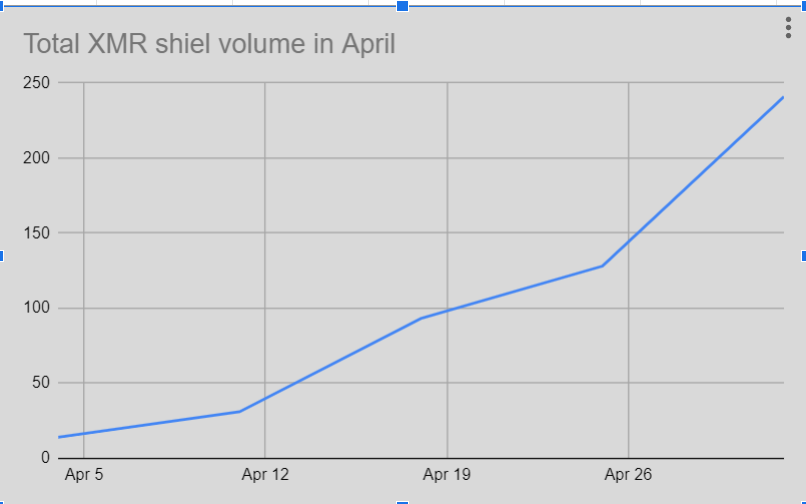 The reason for the growth

Influxes of XMR shielded in Incognito network must reflect on the growth of XMR activities in the Incognito Wallet, so that we can make sure that XMR users are flocking into Incognito. Thus, I should also show how in-network XMR-related activities has grown in April. Last month, I push strongly the message ‘Incognito pDEX as the private swap XMR <> BTC’. Now let’s look at how the volume of pBTC-pXMR pair has grown in April 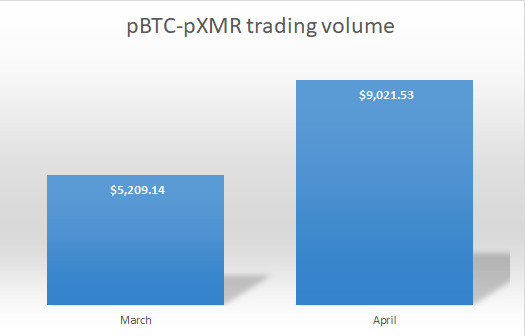 Since the liquidity pool sizes of pBTC-pXMR were small and users actually encounter bad rates, I instructed users the indirect way to private swap XMR <> BTC on pDEX, which uses PRV as the middleman.

So, to have a right perspective on how all XMR activities has grown in April, let’s look at the total XMR buying & XMR selling volume in April and break them down in pairs. 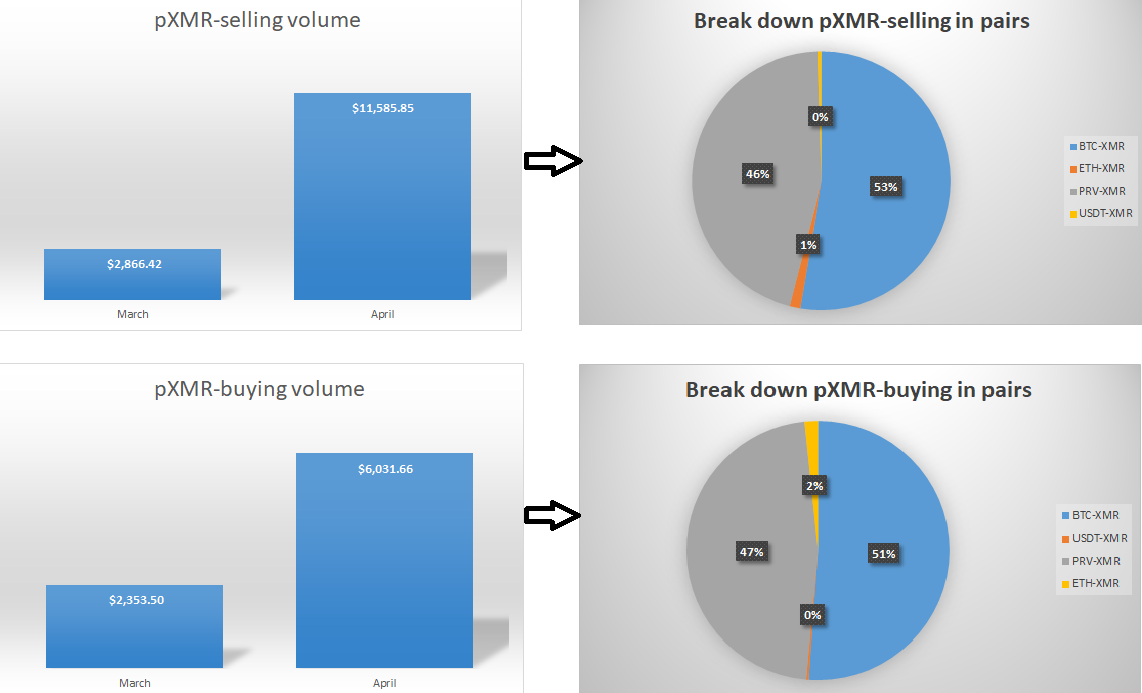 We can see that in April, there were the growths not just in XMR shield volume but also in other XMR activities in Incognito network. Although the KPI wasn’t fully reached, I think there is still room for fine-tuning what we did in April and utilizing XMR-related pairs to create growth for pDEX, the ultimate goal that we will focus on in May.