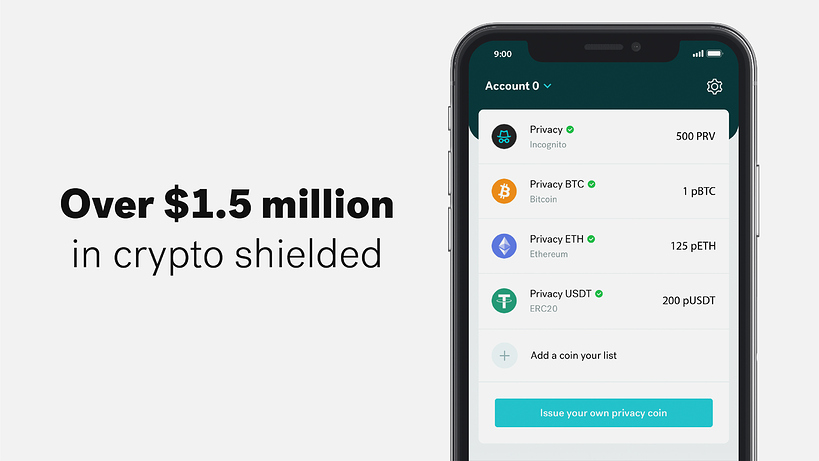 At the time of writing, Incognito users have officially collectively shielded more than $1.54M worth of cryptocurrency using the Incognito Wallet.

This milestone in the history of the project is a testament to both the need for privacy in crypto transactions and the effectiveness of the Incognito community. Over 5,000 users have shielded their coins, transacting more than 200,000 times in just the past four months.

At Incognito, we took a hard look at the blockchain industry around us and noticed two things: a strong desire for mass adoption, but a pervasive lack of utility. It became apparent that a lack of privacy was making entire communities of potential users, like financial institutions and employers, hesitant to adopt cryptocurrency for their financial needs. This alone stands as a barrier to the use of crypto broadly in the real world. But there was something else missing.

Something you can use, now.

Name a cryptocurrency. Chances are, the development model of the project attached to that coin is top-down. Theories are made, funds are raised, and people invest in the token, waiting for the day they can finally use it.

Incognito did the opposite.

A need was discovered; the need for privacy. Then, a community of developers gathered, self-funding the project and building from the ground up. First, the goal was to fill the need for privacy with something people can use, now. Then, make sure the project can be autonomous, and decentralize it completely. Finally, continue to improve and expand.

This is the process Incognito has used, and while there have been some learning moments, it has been a testament to the strength of community. While the first step was to launch an actionable privacy process (the Incognito Wallet), the improvements that came after have been widespread. To name just a few:

It hasn’t been all successes, though. With the growth, we’ve experienced network slowdowns, bugs, and disorganization. We’ve had to work out problems with node shipping and node setup. When a community comes together to build something no one has done before, there are disagreements and setbacks all along the way. So to all users who’ve endured the teething period, and helped to shape Incognito into what it is today, thank you.

The $1.5M milestone shows that people want privacy. And every day, that number grows, as does the number of people sharing their ideas on incognito.org and taking steps to make them happen.

Right from the start, Incognito helped you take back your privacy. By building from the ground up, Incognito has become the only project offering privacy to your existing cryptocurrency, and is perhaps one of the most immediately useful projects on the market. But we’ll leave that for you to decide.

For more, check out all the Incognito proposals currently being developed, or propose your own and get funded.

Thanks for reading! Share your thoughts and join the conversation below!