Yesterday renvm, a solution that allows for generic, decentralized and trustless interoperability between any blockchain, launches.
Incognito is part of the ren alliance and plans to integrate renvm

So I’m wondering how the team will do so. Some thoughts I had were: 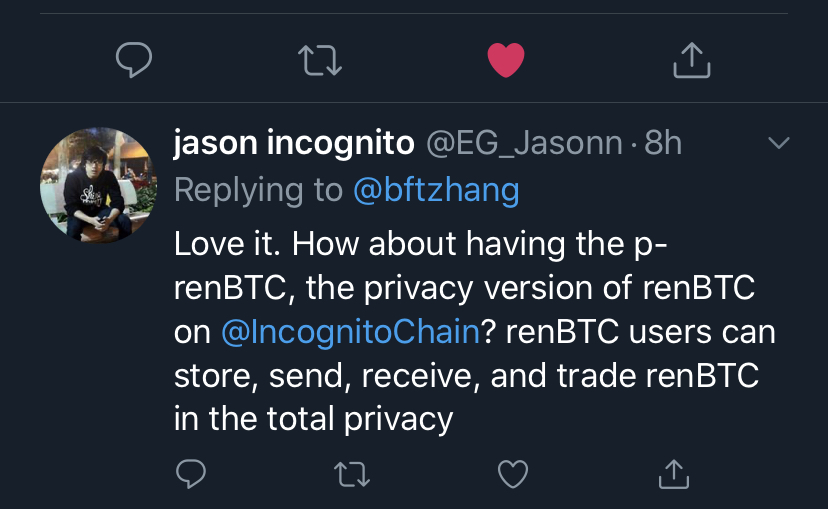 I’m interested to see how the team is planning on using renvm to eliminate work (e.g. no reason to build their own btc bridge) and more.

Hello @davoice321. It was me. Thanks for your idea. They’re all cool. Actually, we are in the alliance with Republic Protocol but we haven’t thought of doing any integration with their newly-launch RenVM. It’s so new, just a few-day old, maybe we should deep-dive in it to understand clearly how the interoperability solution works.

I have some thoughts on your 3 ideas.

We are in the alliance with them, that’s why I dropped the comment there. My idea is only for prenBTC - the privacy version of this Ethereum token just like pBTC and ppBTC that are currently existing in Incognito network.

Who from incognito reached out to the ren team to apply for membership in the alliance?

Lol! This crypto world, where a lot of partnerships are meaningless

Hey @davoice321 FYI: REN was added to the pDEX several months ago. It was a start of the collaboration.

At this stage, the most interesting opportunity with Ren is to merge cross-chain liquidity pools.

More information about this and other integrations will be announced and shared once it is released.

I do not know what is your personal goal, but many of your comments focused on criticism. Feedback is always good, negative feedback even better. But feedback ≠ criticism.

Thanks is for the update.

I tend to ask questions when I’m confused by things.

And I also tend not to waste time not getting to the point.

Thanks for the clarification. I look forward to hearing about the integrations.