In 2018, we wrote the first lines of code for today’s world. In 2020, we launched the first privacy-preserving crypto exchange. In 2021, crypto exploded, and so did surveillance, targeted crime, and loss of freedom.

Incognito builds privacy infrastructure for the decentralized web, designed to scale as the need for privacy grows. This year, the network processed more than half a billion dollars of anonymous trades, launched multiple decentralized bridges, and released a number of technical improvements.

The #1 focus for this area is decentralization. Incognito is technically decentralized with 2,000+ nodes across 8 shards. But it is not yet operationally decentralized. The core team still maintains ⅔ +1 seats in each shard for one single reason: to make sure that the network is fully tested and stable.

Starting Feb 2022, Incognito becomes truly community-driven. We can move forward more confidently now that essential milestones have been achieved. In 2021, slashing went live and improvements to the staking flow were released. Next, we are increasing the number of seats in each shard and transferring consensus from the core team to the community. 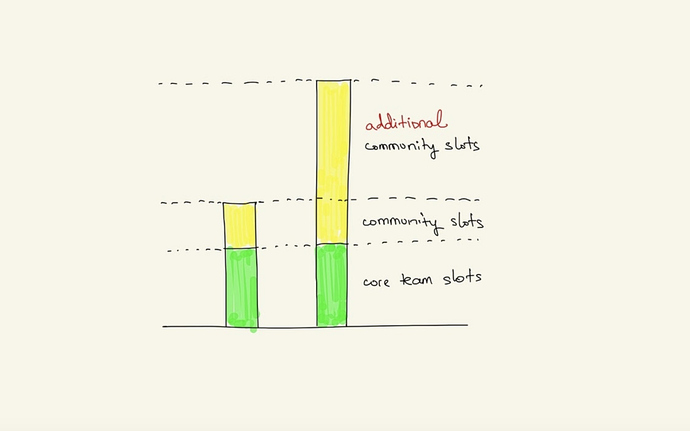 As previously mentioned, Incognito will increase the committee size, you can about the benefits here: Benefits of increasing committee size and answers to FAQ

The team was working on 3 different solutions for reducing blockchain storage:

The three above solutions are optional, a node may decide to run with an option it prefers with a tradeoff between data availability and storage size. Blockchain storage reduction would be a premise for block time reduction (so does decrease transaction latency). The ETA is March 31, 2022

Research has begun on allowing anyone to run a highway for Incognito to aid in decentralization.

After the research is complete we will move to the design & documentation phase followed by the PoC (Proof of Concept). Design & PoC is estimated to take ~8 weeks time and will begin at the start of March.

Research on improving transaction verification performance by seeking Bulletproofs alternatives. Also, the team is also re-implementing the current Bulletproofs with a faster programming language (cgo) to see if it could help improve the Incognito privacy layer’s performance. ETA 18 April 2022

At the moment, shielding experiences the problem of address re-using. That is, the locking address for all shielding requests from the same user is the same. Fortunately, this problem can easily be solved by using one-time addresses.

The #1 focus for this area is growth. Incognito is the first cross-chain privacy marketplace, built for web3 users to exchange assets without being spied on. 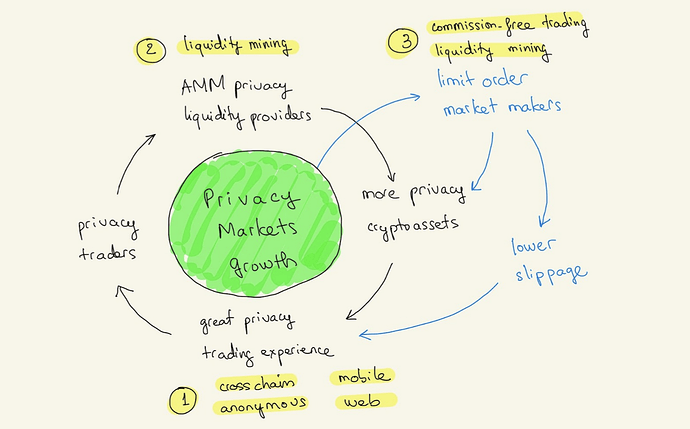 The 2022 growth loop: fueled by limit orders. The Incognito exchange has been upgraded with a hybrid trading engine that combines the best of AMMs and traditional order books. Think of the traditional AMM design as a 2D curve. This hybrid design is a 3D curve, where each price point on the AMM curve now has depth (a list of orders at this price point).

Why a hybrid trading engine is better:

How we will grow liquidity:

Currently, the Incognito exchange is using an NFT token (access ticket term in the app) for a user to prove his/her ownership of an asset (added liquidity or placed limit order). Rather than using 1 token for each exchange’s asset that would need so many tokens when Incognito has more users, we will be using coins of the same token for that. Thereby, it will help mitigate overhead for blockchain, backend, and app processes.

The #1 focus for this area is utility. Incognito is the privacy layer that connects web3 users and decentralized applications across all blockchains.

We believe in a richer world of interconnected networks, each benefiting from the other’s strengths. Not the winner takes all mentality of today’s economy. Incognito brings interoperable privacy to the table – our approach allows users to interact privately with any decentralized application on any blockchain.

We want developers to continue building and innovating on their favorite platform – whether that’s Ethereum, Binance Smart Chain, or Solana – without sacrificing privacy for their users.

We want these users to have the choice of privacy. They should be able to use their favorite applications publicly or confidentially – whenever they want to buy, sell, spend, send, receive, lend, borrow, create, etc. 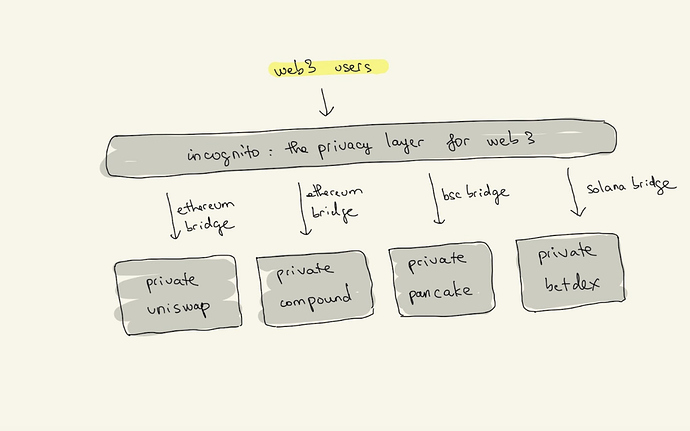 The protocol and backend have both been completed already. The front end needs to be implemented and then it will be passed off to QC.

The estimated finish date would be March 9th, 2022.

pCurve development will begin after pUniswap is passed off to the QC team.

The Polygon bridge has been completed.

QC will check over everything prior to releasing it to the community.
The community post can be read here: Incognito - Polygon Bridge

Fantom bridge development has been completed.

Details about bridge can be read here: The Incognito <> Fantom bridge

Supporting Unified privacy tokens is a very important focus of Incognito and will help to unify the same type of coin from various networks on Incognito (example: pETH, pWETH, peggedETH, etc). An in-depth post was made regarding it:
Unified Privacy Tokens and Interoperable Apps

As this is rather complex, the development window for researching, developing, coding, deploying, and testing bridge aggregators has been given 8 weeks and should wrap up around April 25th.

We’ll be keeping a close eye on what’s going on around us, and will make adjustments to the plan detailed above if necessary. We need your insights and ideas to explore how Incognito can do the most good.

1. Tell us which decentralized apps and use cases you want privacy for. We’re integrating with Pancake first, and we’re open to what’s next. Privacy for lending? For stablecoins?

2. Tell us which decentralized bridges we should build. We’re exploring projects with fast-growing communities like Solana, Cosmos, Polkadot; so their users can have privacy.

3. Tell us what you think about Privacy NFTs. From a technical standpoint, it’s possible to design and implement privacy-preserving NFTs. But is there a demand for it? We are not sure.

4. Tell us what you think about the new website. We’ll be launching it within the next couple of weeks. It will give more visibility to the work that has been done, and hopes to be more helpful for new crypto users. Let us know if there’s anything you think we should include.

5. Tell us what you think about the new app. We’ll be relaunching in a few weeks, and will also be posting previews and explainers leading up to the release. The goal is to improve the experience, so we’ll need your feedback. We hope these UI/UX and communication improvements will drive more adoption for Incognito.

6. Tell us what else you think we should do. So we can work on what the community wants.

The app dev team is having an “all hands on deck” mindset to tackle app performance issues. Their goal is a 50% reduction in app load times and a 50% increase in app menu / key changes.

This should be completed anywhere from Feb 14 - March 11 at which point will be passed off to Quality Control (QC) for further testing March 14 - 25 with production release available to the community directly after QC is complete.

The Incognito app is currently the only interface for users to interact with the Incognito blockchain, the team will be building a web version to help increase accessibility. The estimated rollout for its first version (a.k.a a Web DEX) is April 29, 2022.

To the community and to the 2,000 nodes powering the Incognito network: thanks for sticking by us while we completed foundational work on Privacy Infrastructure this year.

We hope you’ll join us.

Currently, Solana is more popular and the implementation of Solana bridge would be probably easier. However, I would go for Cosmos family (i.e. IBC) first since Terra chain already has a non-seizable stablecoin (UST). In addition to this, Incognito and Secret will be bridged since Secret has enabled IBC. So, two big players of the privacy ecosystem will complement each other and will stand on the shoulders of each other.

I couldn’t agree more. There has been some talk regarding this amongst the dev team. Incognito realizes the importance of a non-seizable stablecoin. I’m glad it is being brought up again.

I think privacy NFT’s would be a great thing to work on! I’m not a programer so I don’t know how that would be accomplished but the NFT world is growing quick and I would love to see them here in incognito!

Encouraged to hear about the continuing privacy and decentralization focus of the project. We should have .onion [1] [2] accessible versions of all Incognito resources (website, mobile app backend/APIs). Like VPNs, Tor is a good (though also imperfect) tool for privacy, and with .onion addresses, a tool to uncouple dependence on easily spoofed/filtered/logged DNS records.
Just a thought…
Peace!

What do you think the use-cases of private NFTs should be? How private NFTs will differ from the regular NFTs?

Maybe they aresl thinking more along the lines of simply having NFTs on the platform and allow people to trade them given the popularity of the sector?

I’m not sure what the point of a privacy NFT would really be. I’m all ears!

When you see this, I think it’s quite an achievement especially compared with other projects of this size. 2021 was a transition year. Keep up your hard work, it’ll be rewarded with time. Thank you to all the devs and @Jared who is forever patient and attentive dealing with queries.

Are the core validator slots sticking around for good or will they be phased out eventually? Not gonna lie I am a bit disappointed as the original roadmap called for 100% decentralization, and now it seems like the devs don’t want to relinquish control and adding extra community slots is just something to appease those of us who have stuck around hosting private nodes.

The fixed slots are being released in phases. 1st release of fixed node slots is in February 2022; 2nd release is in May 2022.

That doesn’t say they are eliminating the fixed slots. I read that to mean they are simply adding more community slots.

Thanks for the support Mike. I’d like to continue supporting Incognito, but it’s hard when the team has stopped supporting growth and only focuses on development, and as such the price of the coin has fallen dramatically. It just adds insult to injury when the team says one thing and then does another, especially with something so important as decentralization. Sure diluting the pool will have the effect of more decentralization, but with the fixed slots still there it’ll never be truly decentralized.

The plan is to fully decentralize. The team is worried about network stability, that is why these nodes exist at all.

After the rollout of pDEX v3, there will be an aggressive full speed ahead into growth for Incognito. I promise you after this rollout some amazing things will be happening. Some things are already beginning to take shape in the background.

It is good to hear that there are plans into the future to decentralize and work on growth. I do plan on sticking around to see that through. I do worry that other privacy focused crypto projects will get ahead in the meantime.

It’s also not necessarily a zero sum game with projects. Each have their strengths and weaknesses and lost people tend to be into a few projects within the same sector.

I.e. if you’re a fan of PRV, you probably also are a fan of XMR, ARRR etc.