How does the Portal work?

How does Portal work?

Portal is now live on the mainnet, finally giving the Binance and Bitcoin communities access to decentralized, trustless privacy for the first time ever. With Portal, blockchains can harness the power of privacy without sacrificing what makes them special. For Binance Chain, that means its scalability, speed, and transactional efficiency.

Portal is in its first of three stages of mainnet launch: Developers and users with a technical skillset can turn their BTC and BNB into privacy coins with Portal without trusted intermediaries. The next stage is integration with the Incognito app’s shielding function, which will enable mainstream users to trustlessly anonymize their crypto at the touch of a button, and become custodians right from the app. In its third and final stage, Portal will be extended to all the other blockchains that previously required trust.

Portal science - how it works

With Incognito, cryptocurrencies can be converted into privacy coins through a process called shielding. Bridges to Ethereum and other smart contract platforms were already decentralized, but trustless solutions can’t be easily built on blockchains without advanced programming capabilities.

While other platforms like Liquid and RSK use a centralized custodial authority to hold deposited tokens, Portal decentralizes the process by using trustless custodians. Here’s how it works: 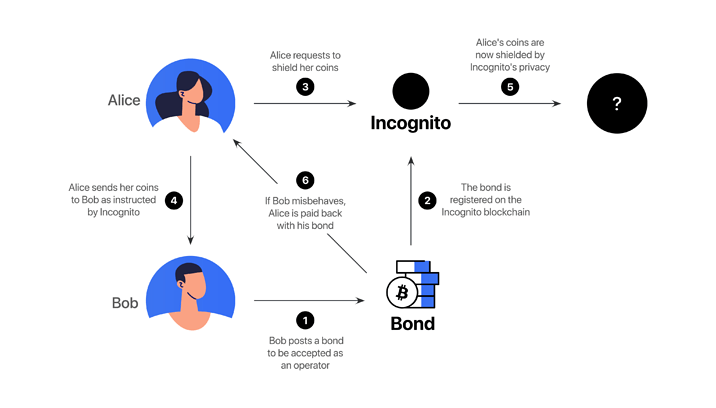 Custodians, like Bob, facilitate the shielding process by holding and releasing cryptocurrency. Anyone can become a custodian by supplying collateral as a bond and registering on Incognito. The amount the custodian can shield is equal to half of the collateral they provide, so for any shielding amount, the custodian must have bonded at least 200% as collateral.

Then, when Alice wants to anonymize her BNB, she deposits her BNB to a custodian’s address provided by the Incognito network. She publishes a proof of the payment to Incognito, and the network mints a corresponding amount of private BNB. Unshielding is the same process in reverse, only now Bob must submit proof that he returned the money to Alice.

Should he fail to do so, Incognito automatically slashes his bond and compensates her with an equivalent amount of collateral. In the current version only PRV is accepted for bonding, but other coins will be introduced as well.

At any time, the user can redeem privacy BNB for “regular” BNB at a one-to-one rate.

The over-collateralized bonds protect against misbehaving custodians. Combined with a network of individual custodians and a permissionless process, it makes for a trustless and safe custodial option.

While the process is simple and automatic, Portal has not yet been integrated with the app interface. As a result, only advanced users are able to take advantage of it for the time being.

Custodians receive shielding and unshielding fees for their service. Currently, they amount to 0.01%. On top of that, 20% of the proceeds of the Incognito DAO will go toward supporting the bridge as well.

The annualized yield will vary significantly based on the demand for privacy and the number of custodians. More than $6.45 million in shielding operations have been registered since Incognito launched its mainnet in November 2019 — powering privacy can be quite lucrative.

Blockchain interoperability typically takes the form of building individual bridges as needed to each blockchain. Portal takes a different approach: Build once, for any blockchain.

Portal is designed as a general bridge that is compatible with any number of cryptonetworks, allowing for secure bi-directional transfers of cryptocurrencies whenever privacy is needed. For each new connection, only a few customizations are required before the link can be initiated. In most cases, this means implementing the respective blockchain’s Simplified Payment Verification (SPV) logic with Portal.

As a result, Portal will continue to branch out to any blockchains that need privacy. It’s the first trustless bridge for anonymizing BNB, BTC — and soon, many others. It’s also the second ever trustless interoperability method to bridge together Bitcoin and Ethereum — and the first for Binance Chain. Just use the Incognito pDEX to anonymously move between blockchains.

@andrey This is very cool! Who can I contact if I have any questions?

Feel free to publish your questions below or DM me )