Incognito can enable privacy for any cryptocurrency by connecting to external blockchains using inter-blockchain bridges.

The end goal is for fully decentralized trustless bridges, like Portal, to connect every blockchain with Incognito seamlessly. But as fast as we move, this takes time.

In the meantime, trusted bridges are being built to offer privacy to blockchains. They‘re called “trusted” because they innately require some level of trust in the bridge operators, since they aren’t fully decentralized. While we’re working on decentralization, this is mitigated by the fact that anyone can build a trusted bridge.

Trusted bridges are centralized or semi-decentralized ways of transferring cryptoassets between an external blockchain, such as Litecoin, and Incognito. It’s how you’re able to use coins like pLTC anonymously on the Incognito network.

When you shield or unshield your crypto, the bridge manages the custody and exchange of regular coins and their corresponding privacy coins.

When a trusted bridge is created for a blockchain, a privacy version of that chain’s cryptocurrency is first minted on Incognito.

Then, a custodial multi-sig wallet is created to hold the newly-minted privacy coins and any shielded crypto that comes in. These wallets must be equipped with functions that can prove that the coins are backed 1:1, and issue proofs when they receive/release coins.

The bridge then facilitates the exchange between privacy coins and regular coins.

Let’s take a step-by-step look at shielding and unshielding with trusted bridges. For this example, we’ll use Litecoin (LTC): 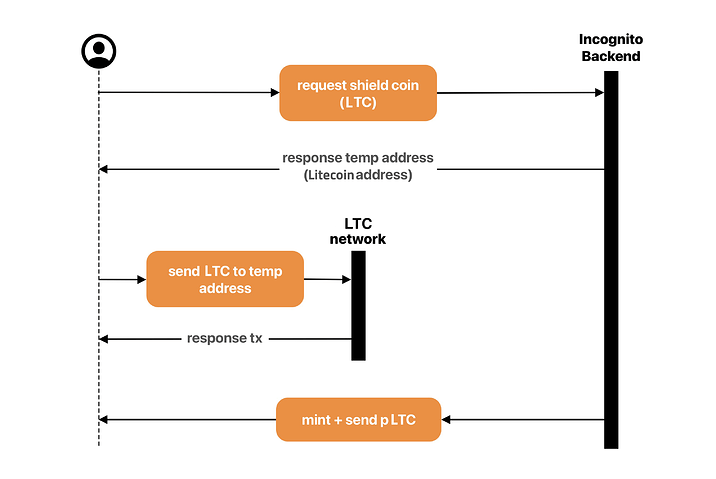 1. You request to shield LTC

In the “Assets” tab of the Incognito app, you tap “Shield my crypto”.

2. You receive a one-time address

The Incognito backend generates a one-time address (OTA) for you to send your LTC to.

From your non-Incognito wallet, you send 1 LTC to the one-time address provided.

4. Your 1 LTC is forwarded to the custodial wallet

The one-time address is not the final address, but a proxy. It forwards the 1 LTC to the custodial wallet.

The custodian confirms your coins have been received to allow the next step to take place.

6. Incognito backend mints 1 pLTC and sends it to you

Once proof of receipt is confirmed, privacy coins are minted at a 1:1 rate of your deposit and sent to you.

7. You receive 1 pLTC, ready to be used anonymously on Incognito 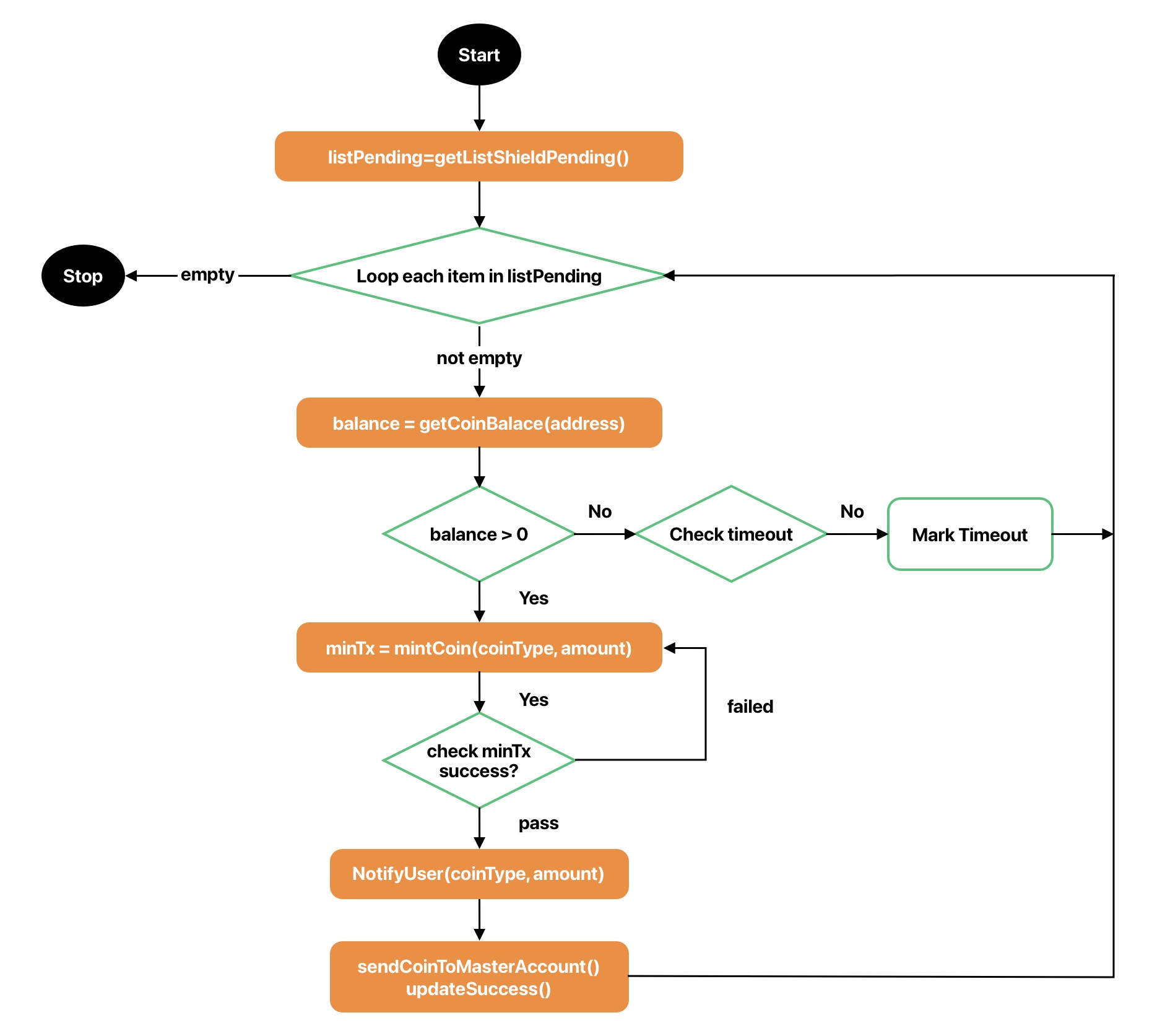 Unshielding is the act of sending your crypto out of the Incognito network. It is similar to the shielding process, but in reverse. 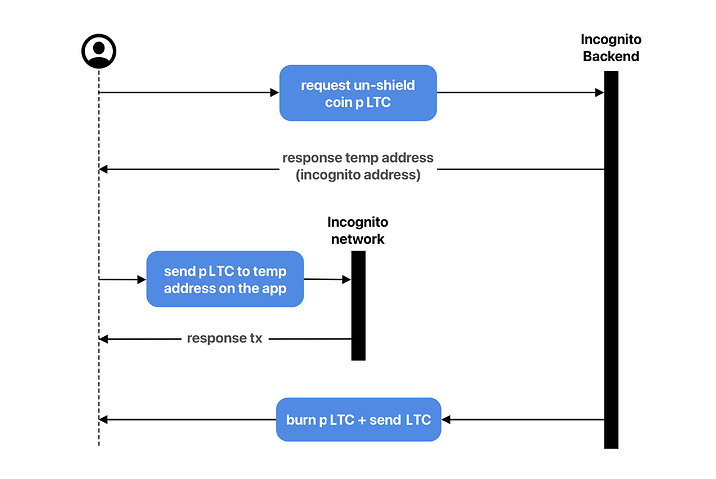 1. You initiate a transfer of 1 pLTC to a non-Incognito address

Once you hit send, the following steps take place on the network, invisible to you:

2. Your 1 pLTC is sent to a temporary address

Burning crypto (which will take place next) is a public transaction, so the temporary address is used to break the link. As the sender, you remain anonymous.

3. The Incognito backend checks the balance of the temporary address

This is to ensure your 1 pLTC is ready to be burned and no longer in your wallet.

Since privacy coins are meant to be used on Incognito, they can’t leave the network.

5. The custodian releases 1 LTC to the address you provided

Once the pLTC has been burned, the custodian can release an equal amount of LTC to your intended address.

6. The address you provided receives the 1 LTC

Now that the coins have left Incognito, they are no longer private. You can expect to transact them on external blockchains with their standard level of publicity. 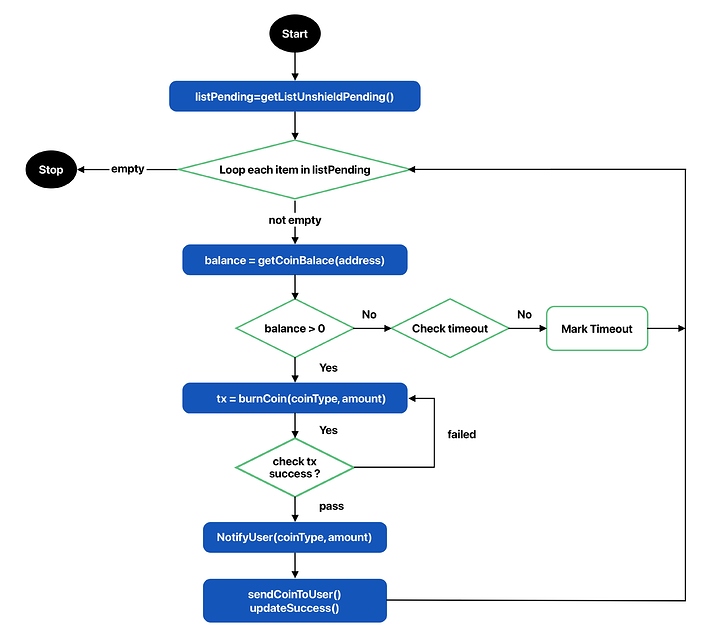 Trusted bridges offer the same privacy as trustless bridges. Once your funds are incognito, they’re good to go.

Trusted bridges make adding privacy to any blockchain easy, and they’re much faster to create than trustless bridges. They’re the perfect way to spread privacy to the entire cryptosphere as we continue decentralizing the Incognito network.

If you have any thoughts or questions, don’t hesitate to share them with us in reply to this topic!

Thanks @aaron for this detailed explanation. What do you think how long it will take until all this can be done without any third party involved?

Multi-Sig how many people have to sign actually in order to mint/burn tokens? Can with this setup something happen like it did to polkadot in the past?

What do you think how long it will take until all this can be done without any third party involved?

Are you referring to the needed time to implement a trusted bridge? If so, it depends.
Let’s say BTC, BNB, NEO chains…it’s possible to use a third party Node, so it usually takes us roughly 10 days to complete the process. While building a bridge to Monero and Zcash chain is more complicated that we need to setup a private Node ourselves, so it might take up to a month to finish.

Multi-Sig how many people have to sign actually in order to mint/burn tokens?

Aaron’s explanation is about the whole Shield and Unshield flows in general. For the time being, multi-sig wallet is temporarily not required for the process yet. In the near future when Privacy v.2 is deployed, it will be supported.

Can with this setup something happen like it did to polkadot in the past?

The DOT ICO took place in October 2017 and raised over 145 million USD in Ethereum. Less than 2 weeks later, over 90 million USD of the funds raised during the ICO were permanently frozen due an exploit of a vulnerability in Parity’s (makers of Polkadot) multisig wallet code. Although there have been efforts to retrieve the funds, over 500,000 ETH are still locked to this day.

The Contract Address 0x3bfc20f0b9afcace800d73d2191166ff16540258 page allows users to view the source code, transactions, balances, and analytics for the contract address. Users can also interact and make transactions to the contract directly on...

@sato
multisig is still in developing, we always learn and also take care about all case happened in other chains and make test.