Cypherpunk Guild funds Incognito to build privacy for NEAR ecosystem!

We’re so excited to announce that Cypherpunk Guild has awarded a 40k grant to Incognito for the deployment of NEAR <> Incognito bridge!

Thanks to this grant, NEAR users will soon have a right to use their assets with full anonymity, while Incognito persists in the mission of powering privacy to a variety of crypto assets and dApps (DeFi). 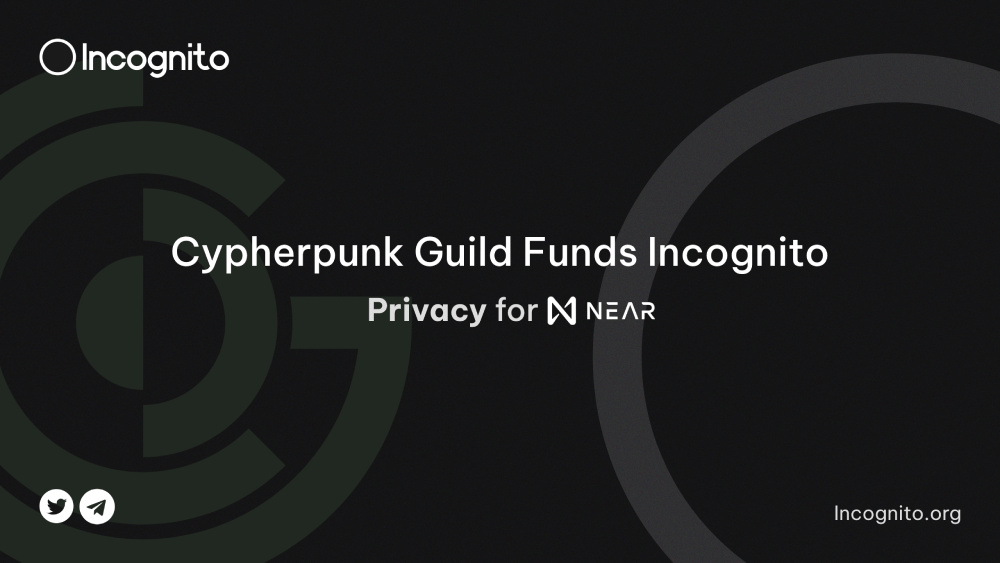 As usual, our ultimate goal is to bring the highest level of privacy to the NEAR ecosystem via integration. Taking the same approach with the previous 13 bridges, once the Incognito <> NEAR bridge is deployed, users will be able to transfer and cross-chain trade their crypto assets seamlessly while their privacy is well preserved.

The Incognito team has already started working on the NEAR<>Incognito bridge which is expected to be deployed in July 2022. If the bridge succeeds in getting good traction from both communities, we will continue digging deeper into the cooperation by integrating with NEAR’s dApps.

Phase 1 of the integration will complete with the bridge deployment:

Kudos to @thachtb @elvis.p @tn1501 for building the bridge and help people trade NEAR assets with privacy!

The Cypherpunk Guild is a group of privacy-minded developers, marketers, and entrepreneurs, jointly collaborating to pioneer a future built around private transactions on NEAR Protocol and the larger crypto-verse. Led by two second-generation Cypherpunks, the Cypherpunk Guild supports the development of private applications on the Open Web, as a means of safeguarding user privacy and freedom.

Cypherpunk Guild made a thread on Incognito privacy solution >

June 17 Update: Hurray! The development is basically done and the demo is up! Show your support by like and subscribe to our channel