Because if node jumps between shards means its database consists of all shards?
but what is strange their size/heigh differs?

@huglester, talking more about this, your observation is true but i want to explain why:
Phase 1: when staking new node, your node started to sync beacon block from zero to latest
Phase 2: a random number that gets from Bitcoin blockchain was used to determine which node to which shard. Your node is randomly assigned to a shard. Eg. shard_2, then it started to sync shard blocks, from zero to latest, let say latest block number is 1000
Phase 3: when your node become shard_2 committee validator, it started to validate block, eg.: validate block 1001 to 1200 of shard_2, your node earning reward for every block produced in shard_2, but full reward is only paid once at the end of epoch.
Phase 4: at the end of epoch, your node is swap out of committee, it stop sync shard_2 block but continue sync beacon

The process start over at phase_2, then there are 2 cases:

That being said, you can copy chain data to another location/machine, just make sure file path is correct.

PS. Notice at Phase_3, due to internet speed, hardware specs of committee node, that made a shard produce more or less blocks than others, that why reward in each shard is different when epoch ended.

How can I use the getRewardAmountByPublicKey rpc?

I’m trying this without any luck:

It’s telling me method not found.

It always gives the result as 0 for me. Maybe @khanhj could help, please 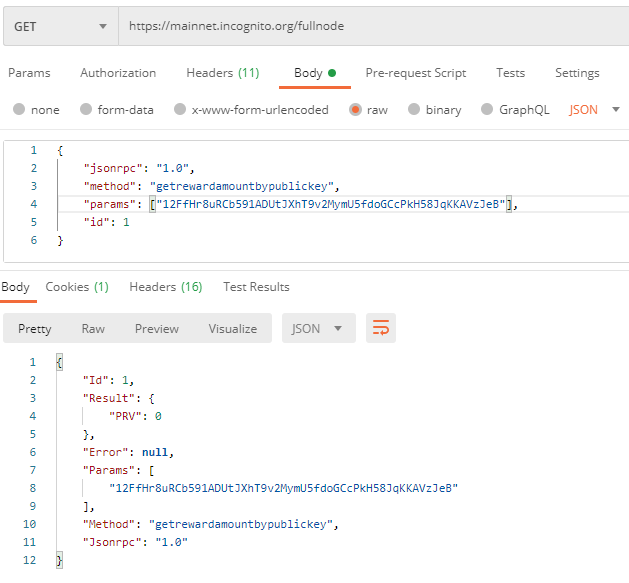 It is case-sensitive. You should write the method in lowercase. If still not exists, this means that the method is not deployed to that full-node yet. @J053

Hey @J053,
seem like a bug with this rpc, I will report this to our team.
in the mean while, please try this RPC:

Hello. What are the possible roles and their meaning when using the getincognitopublickeyrole RCP?

I have found that 0 is waiting to be selected and 1 is pending, but I want to be sure.

Question for the group…

I ran rpc for getmininginfo and my node is returning -2, which i thought meant waiting.

When I checker docker stats it doesn’t seem to be working any harder than the other nodes (which is not very much, so I’m skeptical that its working in committee properly).

I ran getincognitopublickeyrole and its returning Role : 2, confirming it is earning right?

I THINK that it is earning but only because slashing isn’t implemented and perhaps its not syncing right in this current committee and would be cut with upcoming slashing.

In other words…I’m trying to determine if its working correctly.

Given this info what do you all think?

But that also returns shardID “2”,

Depends on the reported BeaconHeight. If the BeaconHeight is below the Beacon Chain’s height (currently ~875,760), then the Node is still syncing the blockchain data. While the Node is syncing the blockchain, it will report the state of the Node at the block height it has synced to. So if your Node was in committee around block 872,260(100 epochs ago), then it will report status from that period, not current status. This would give you a positive integer indicating committee shard, in this case 2.

If the BeaconHeight is around/above ~875,760 then that’s the current status indicating yes, it is in committee for shard 2.

Is there any RPC call to check node history data? Like past earnings?

We don’t have that RPC. I use Nito bot to track my node history, earning status.