I have one of the pnode orders that was canceled and thus never received it. But I was only refunded a portion of my payment and told that was their practice in accordance with their “30 day return policy”.
I never received and/or returned a pnode. The pnode order was not canceled by me. I believe I am entitled to a FULL refund for the pnode. Is anyone else having this issue? This is not good way to gain trust among new users.

You are probably full refunded in USD not in the cryptocurrency you paid with. That is kind of how refunding works within the Incognito project.

If you pay x coins worth $399 at that time, you get $399 worth refundend. If the coin value went up between your order and the refund you receive less coins than you paid. Is that what happened?

That is kind of what happened. Except I never received, returned or canceled my pnode and per their email (see below) I was told I would receive a full refund quoting the exact amount. 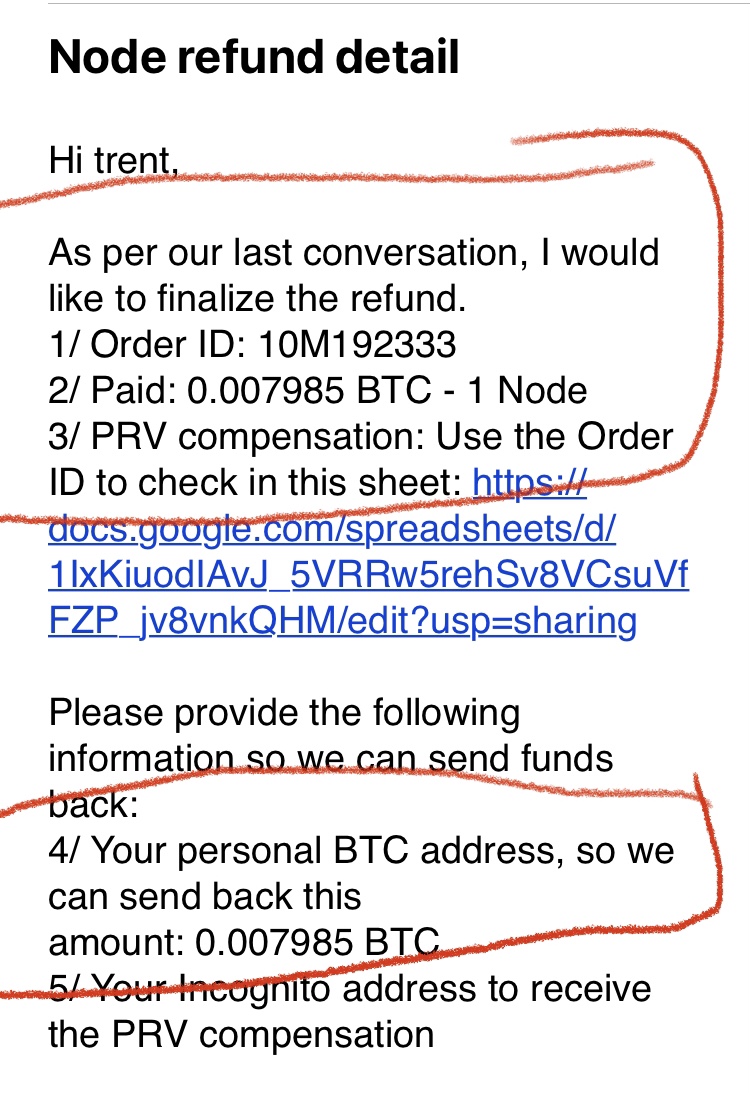 If the refund hadn’t taken almost a month, with constantly having to check in, then being told I had received the refund when I hadn’t and then being notified that they were reducing my refund, I might not be so upset. It all seems shady. It’s more about the principle than the money, but I would be financially better off if I never heard of incognito.

The team really needs to step up here and make this right. This appears to be an auto-refunded transaction – i.e. a pNode order canceled by the team, not the user. It really is incumbent upon them to make Trent whole again, since they canceled his order. And even if Trent canceled the order, the email he received states unequivocally that he would receive the full BTC:

C’mon guys, you are better than this. Make Trent whole again.

I don’t disagree, just explaining how it was explained to me way back when I was still part of the team, and was as surprised to learn about the recalculation instead of sending the original amount back.

Even then I thought it to be better to keep funds available until the refund period was over.

A PRV compensation is mentioned, what is that about? Does it cover the rate difference, or is it a bonus for the order getting cancelled?

Thanks Jamie, the PRV was offered at 21% interest on the money for my node until I received my refund. It came to 1.98+ PRV, nowhere close to the loss in BTC. It very much seemed like an apology for canceling my order.

Here is an email from Incognito explaining the PRV, also reiterating their commitment to a full refund. 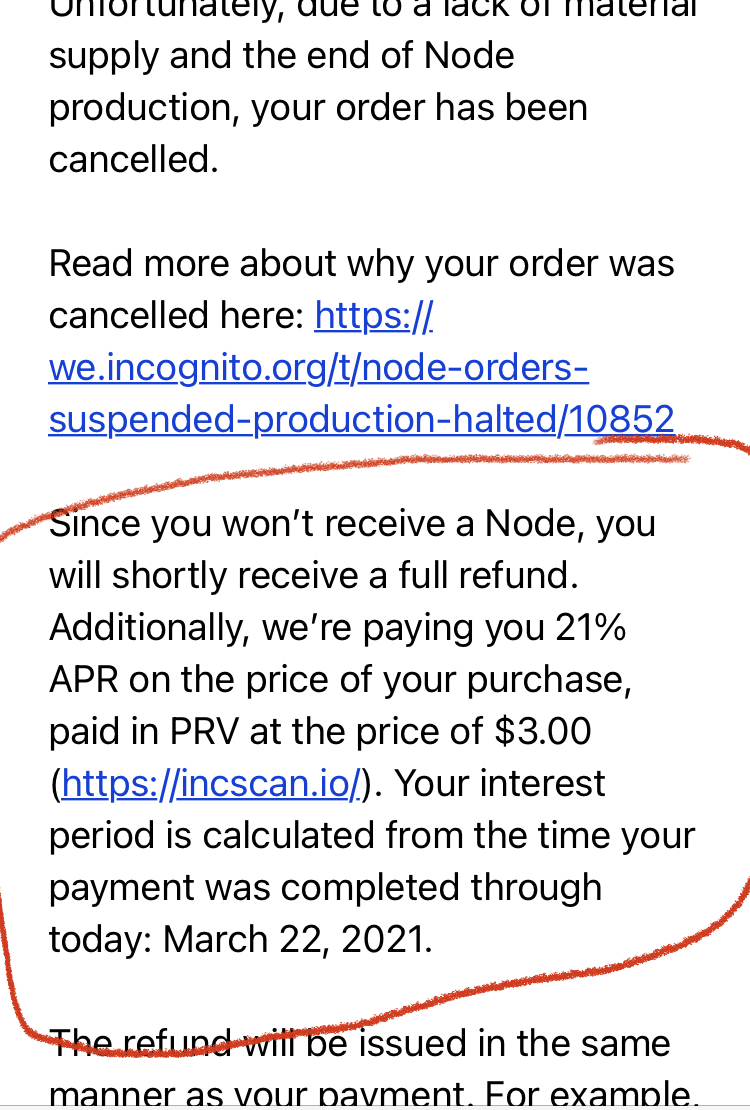 Thanks, I understand. The idea is “you paid us $399, we are refunding $399”. If they converted the BTC you paid to USDT on receiving them, they would have to invest more than the $399 to pay you back your initial BTC amount.

I understand the logic, it just should be communicated better.

Only Support can fix it, if it is fixable. Send the Support account a personal message and see what they can do.

Thanks Jamie, I’ll contact support. Communication is a big part of the problem. If (big if) I get a response from incognito, it’s sporadic, does not acknowledge the issue and seems to come from a multitude of people or a generic account. Hence why I’m using the public forum. Again, if the refund policy was communicated to me at any time (it still hasn’t been) it may be more tolerable. Instead they stated on multiple occasions that I would receive a full refund. Full stop. I’m sure it’s a lost cause. I was just testing out Incognito with $1500 to see how I liked it, it’s obviously not for me. Lesson learned and paid for. Thank you for your ear and support.

@aaron Are you the right person to tag for this?

No support team members are left. The devs are taking care of support themselves now. It means you have the shortest line between the one who needs help and the one who knows all about how the system works. It unfortunately also seems to mean, it takes longer to get an answer coz they are also busy developing.

In short, there is no use in tagging any of the former support team members for specific support issues. I can only assume they are still around as regular community members, able to answer general questions.

That is how support worked, one account, all (former) support team members had access to that account. The idea was, the user would not have to wait long for a first reply because support members were in different timezones. It was always daytime at someone’s spot on the earth.

However, when solving an issue involved a dev, a delay could happen. The devs are in Vietnam, and mostly around during working hours. Asking something on Friday arrives on a devs desk on Monday.

Apart from the Node refund issue, I think Incognito is a pretty solid project and organisation. It takes courage to make the move they recently made. You may regret not being part of it later on.

No support team members left?!
When did they announce that?

Andrey said he was no longer in function the way he was before, in a post. Aaron posted something similar. Rocky, not sure who that is, mentioned Peter is no longer part of the team. It came in bits and pieces.

You do see more activity from devs.

I sent a message to the support account. I don’t expect a response. Thank you for your help. Navigating this site is a little chaotic.

I hope they’re not gone forever

It is not like they left because they didn’t believe in the project anymore. It was decided for devs to do support to shorten the chain of contacts. Make it more direct, and let the devs take more responsibility for their part of the project.

Neither one has their moderator badge anymore. You can trust me on this one. In case of error, you will be talking to the devs directly.