The Incognito app is the interface for users to access some pretty unique privacy features, but it’s hard to use. People get lost in the tabs. It’s easy to make mistakes. While significant improvements have been made since the first iteration in November, there’s still plenty to be done.

Design-wise: strip it back and give core elements space to breathe. Dev-wise: focus on making important actions rock solid. UX-wise: study feedback to see how users actually use the app, and implement it.

At the time of writing, 10,300 people are currently using the Incognito app. We’ll try to give them something better.

We are @binh, @phathoang, @AnhTu, @Mo_Incognito, @Anh_Ho and @ning. We developed and designed the back and front end of the old app, the current app, the old web, the current web, and many of Incognito’s other products and initiatives. This month, our sole focus will be on whipping the app into shape.

The app is the first impression most users will have of Incognito. It’s pretty important to get right.

Here are our deliverables:

We will also be assisting the pDEX and Node teams with their UI/UX.

This is a proposal to improve the Incognito app.

We’ll really need your feedback! Looking forward to building the new app with you.

I have a feedback.
In the pDEX there is no direct option to send coins, even though it is possible by using the Send button that is in the menu. Why not just move it there? Or at least have a quick access to the withdraw button instead.

hey - in a couple of weeks, @tien will release an update that will allow you guys to trade out of whichever account you want. this should solve the need for withdrawals/deposits.

in general, we’re in the process of streamlining the entire app (starting with core actions like shield/unshield/send/receive/trade). so if you have any other feedback, do let us know! i’ll post some sketches here today too.

Thank you Ning for the feedback. I’ve just moved this into “Funded project” category.

I had and have some feedback:

1- I had some here. Some of them may become invalid until then.

2- Could you merge the same coins in the different chains into one coin? For example, there are two coins for BUSD. One for Binance Chain (Privacy BUSD-BD1), one for Ethereum (Privacy BUSD). This creates two problems: First, the liquidity may be divided into two pairs. This problem does not appear currently because the users probably are not aware of the one in Binance Chain or cannot trust that one since it does not have any logo. Second, the withdrawal fee (~$1) of ERC20 BUSD is ~75x higher than that(~0.001 BNB=0.017) of Binance BUSD. The minimum withdrawal amount is way higher than that of Binance BUSD, too. In fact, in a broader sense, my worry is that we will have this problem after Uniswap/Kyber integration. I hope we do not see pWBTC/PRV pair in addition to pBTC/PRV pair in pDEX.

Since papp browser didn’t have sharing and routing, all links were being redirected to the browser view, and the process flow of the papp was being corrupted.

thanks for the detailed feedback @abduraman - i’ll keep you updated. @binh @tien let’s discuss this next week?

this week we held some internal focus groups and continued to churn out sketches. while we’re seeing a good number of transactions at the moment, we think the flow could definitely be improved.

if you’d like to be a beta tester for the incognito app, just reply to this topic!

here are some changes we are considering – remove ‘in-network/out-network’ for both send and receive (generally considered to be confusing). Separate into 4 core actions: shield, unshield, send, receive.

on the new balances page (vault? wallet? keychain? name undecided, let me know what you think), users will see their total shielded balance in PRV. they will have the choice to shield more, or unshield their coins and remove them from the incognito network. account selection will remain. 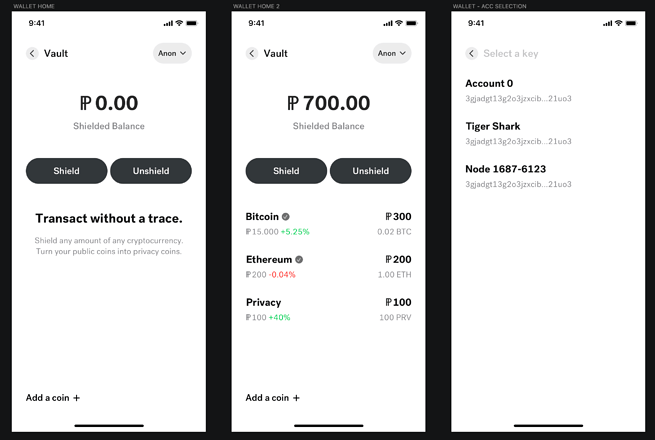 When users tap on a coin, say Ethereum, they’ll enter the ‘in-network’ flow - sending and receiving confidentially between incognito wallets. no confusion here with out-network options. 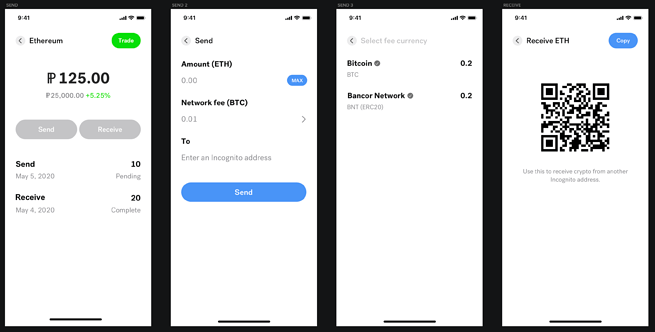 this coming week, we’ll all work in parallel. we’ll aim to get the new flow on the staging app, keep talking to people, and keep exploring ways to improve on what we have. the chain team will also work on the backend to improve the user experience, reducing the likelihood of tx error or order timeout – especially when it comes to out-network transactions like shield and unshield.

I want to be a tester

I would love to test the new app

I’ll be a beta tester, I def would like to see some improvements and give feedback. As prob one of the least crypto knowledgeable I can give some perspective from a very new user

@eldad - yes i’d love to get some feedback once we get the rough shape of the new app up and running. let me know if you are interested.

and thanks @J053, @CodedInk-KryptoHolic, @ChrisMac, @Revolve, @abduraman and @Joe_Moffett! if all goes according to plan, we should have something for you guys to have a look at next week.

i’ll get a group set up between us when that’s ready so we can all brainstorm.

@eldad - yes i’d love to get some feedback once we get the rough shape of the new app up and running. let me know if you are interested

Yes this would be awesome. I’m in, just let me know. Have a great day!

im up for trying it out