Just confirming on the node monitor page that under status “wait finish sync signal…” = the 25 epoch waiting period until it goes into the pending queue?

Can you send me a screenshot?

Sorry meant Next Event not status. 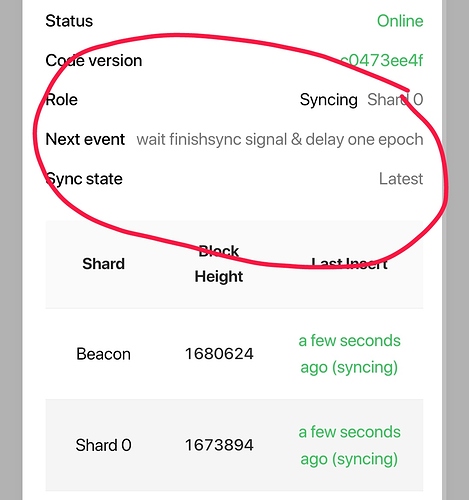 The time that node is in sync state must not less than 25 epochs. It means 25 epochs is not fixed for every node, it is also depend on how quickly your node sync (i.e sending FinishSync signal)
The text is quite misleading (as it will apply for future update), currently the waiting period will start counting as soon as node send Finish Sync signal.
For example, your node is stake, and after 1 day, it finish sync process. From the time node send Finish Sync, it will take 1/2 Pending Cycle to be in Pending queue.

Thank you for clarifying

The monitor cannot check when your node trigger Finish Sync, so we cannot give exact information when the node will be in Pending. But after the time your node is Finish Sync (check Sync status) + 1/2 Pending Cycle(25 epoch), your node should be in Pending Pool

Got ya! Thank you

@Support there seems to be a problem with this: vnodes staked a week ago are still showing “wait finishsync signal”. I used bootstrapping so sync took about 15 minutes (calculating 25 epochs ~4.16 days) waiting period should be over by now? Everything is fully synced. 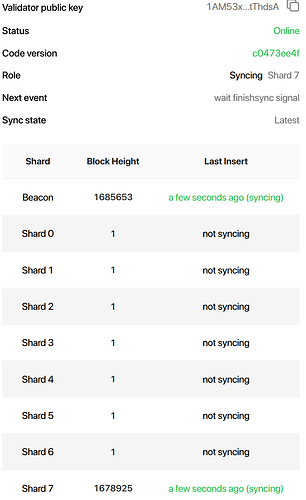 I’m getting the same issue.

Nodes staked two days ago are already in the pending queue whereas a node staked over a week ago is still on the wait sync signal. Beacon and shard data looks all up to date on the node.

Also having a similar experience. First time vnode staked 5 days ago with shard and beacon synced to latest but still “wait finishsync signal”. I think I have waited until a full 25 epochs have passed, but will wait a little longer I guess. I am curious if speed of cpu with 4 cores plays a significant role in this wait period.

Note: Several hours after I wrote the above, my node did switch to “pending” for 27 epochs to be in committee, so my node did leave the “wait finishsync signal” state correctly within around 6 days.

Same to me, my nodes are still waiting for finish sync signal, staked 2 weeks ago

Bringing in @Jared on this too to expedite. Seems like there’s a few of us thinking the same thing. Two weeks for @min0r is way too long.

I noticed that my newly staked vnode now in “wait finishsync signal” went offline for less than 60 seconds and came immediately back on (reasons are known and will be avoided in the future), but would such a brief less than 60 second offline node cause it to have a wait another 25 epochs? Just wondering about whether some kind of reset would be triggered if node is offline after an extended period of time. I am hoping certainly a 60 second reboot causing disconnect will not affect its wait time other than the time it takes to catch up syncing blocks. Anyone know how long a node can remain offline before it triggers consequences while in this “wait finishsync signal state”. I am aware that being offline during committtee would have more serious consequences, but that is not the situation I am wondering about now.

Are you sure the sync is finished for both the beacon and shard?

Please provide me your ValidatorMiningPublicKey for this node so I can look into it further.

As I currently understand it, there would be no impact as this is just a waiting period. I will reach out to the devs and get clarification on this.

In general, it might be good for all us miners to know all the “timeout” settings, for example, exactly how long of being offline (for whatever reasons) in minutes would it take for any predictable programmed (by devs) consequences to occur?

Example 1 when in “committee”, when a node is in committee, I would assume there is a programmed amount of time after which that node if not responding is kicked out of committee (and slashed). Can we know that exact amount of time that causes those consequences if it is built-in to the code? Or are there security reasons that should not be made public?

Example 2 when “pending”, after what amount of time would a node which has gone offline from “pending” status with latest sync on beacon and shard would that node NOT be able to return to pending status? For example, I occasionally have to do an upgrade or move to another port or tweak something which requires usually quick reboots or a very short offline period. I have noticed I can return to “pending” if I get node back up quickly and of course when I control the timing of my offline moments, I do this when I am many many (>20) epochs away from being in committee so there is time to sync up. But it would be nice to know what time frames are programmed into the code regarding when nodes go offline in a variety of situations like “in committee”, “pending”, or in this “wait finishsync signal” state for my one new node. The more information we node operators have, the better able we are to plan or work with whatever “offline” moments we have which I do my best to avoid (i.e. I have battery backups here in case I lose power for example). No rush on this during the holidays.

Example 1 when in “committee”, when a node is in committee, I would assume there is a programmed amount of time after which that node if not responding is kicked out of committee (and slashed). Can we know that exact amount of time that causes those consequences if it is built-in to the code? Or are there security reasons that should not be made public?

Nodes are slashed when they have less than a 50% vote. I am unsure if the vote is a timed based tracker or event based (ie block verification) and will get clarification on this as well.

I’ve asked for clarification regarding this as well.

FYI I tried stopping the container and restarting it. It’s worked for one node but not for two others.

How long since that node was staked ?